For the second sale running this year in Tullamore, Charolais bulls realized a solid trade on Saturday last. This was highlighted in the fact that 81% of the bulls on offer sold to a healthy average of €3,110. Topping the trade at €5,600 was Bunratty Mike Tyson, exhibited by the Melody family from Bunratty, Co. Clare. As his name would suggest, Tyson was undoubtedly a powerful, heavyweight bull. Sired by the stock bull, Topnotch Elvis, this 15 month old bull carries both Domino and Texan gie on his dam’s side. He also boasts a huge five star terminal index of €153 and a calving figure of 9.4%. He was knocked down to well-known Charolais breeders, Matt and PJ Ryan from Borrisoleigh, Thurles, Co. Tipperary. 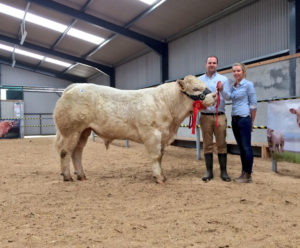 Bunratty Mike Tyson who sold for the top price of €5,600, with breeders Cyril Crowe and Mags Melody.

Earlier in the day the overall champion of the show was awarded to Kilbline 1 Leader ET, exhibited by the Sugrue family from Bennettsbridge, Co. Kilkenny. This stylish, November 2015 born son of Oscar caught the eye of Judge David Connolly of the Brigadoon herd in Northern Ireland. His dam, Kilbline 1 Carlinda is also a daughter of the fore mentioned, Domino. The champion bull found his new home with Anthony Mc Veigh from Carrickmacross, Co. Monaghan for €4,500. 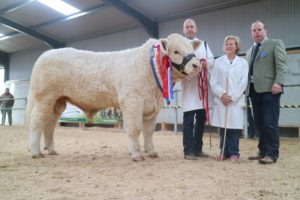 Richard Hackett from Clonlara, Co. Clare claimed the reserve champion of the show with his 12 month old bull, Limkiln Mozart. This quality young bull is a son of the homebred, Limkiln Jake. His dam, Limkiln Irene 2 is a daughter of the UK sire, Balmyle Vagabond. He went under the hammer at €4,700, selling to Matthew Kealy from Ballyfoyle, Co. Kilkenny. 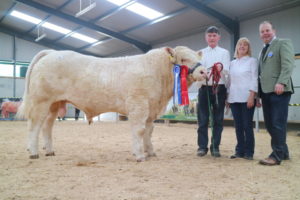 Tipperary man Tom Ryan had a successful day out with his 18 month old, Kilcommon Leo. A son of Pirate out of a CF 52 dam, it was no wonder the Tipperary bull was so sought after in the sales ring. Having picked up a red rosette earlier in the day, Leo exchanged hands for €5,100, heading Northwards with Alan Greascen from County Monaghn. 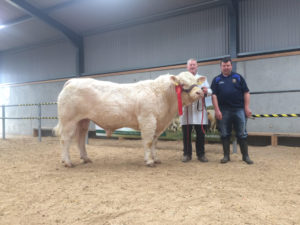 Kilcommon Leo who sold for €5,100 with Paul Fahy, handler and Tom Ryan, breeder.

Next best in the sales ring was Dorrington Leon exhibited by new breeder, William Gerard Moran from Athlone, Co. Westmeath. This December 2015 born son of Fury Action and a Pirate bred dam, possessed an impressive set of indexes on paper. He sold with a five star terminal index of €145, a five star replacement index of €67 and a calving figure of 9.2%. Buyer here was Alan Kinsella from County Wicklow at €4,150.

Hitting the €4,000 mark was Knockmoyle 10 Lincoln ET exhibited by Gerry Lynch from Tulla, Ennis, Co. Clare. Another son of Pirate and CF 52 bred dam, Lincoln ticked all the boxes as a terminal sire, selling with a five star terminal index of €165. He was quickly snapped up by Westmeath man, Thomas Mc Loughlin.

County Galway breeder William Flynn then sold his February 2016 born bull, Tullyvillage McGregor for €3,900. This one is a son of the Dovea AI sire, Lisnagre Hansome and a Utrillo-BP bred dam. Once again this young bull carries a boastful terminal index of €153 with a calving figure of 9.1%.

It wasn’t long until Pirate was back to the fore once again, when another son of his, Longstone Lenny hit €3,700 for breeder John Mc Weeney from Ballinamore, Co. Leitrim. This November 2015 born bull sold with a calving figure of 6.3% to Andrew Finnerty from Ballinasloe, Co. Galway. Jim Geoghean from Streamstown, Mullingar, Co. Westmeath then sold one of the highest index bulls catalogued for €3,500. Lisnagre Lad is a son of the French AI sire, Tombapik and Ballydownan Curie, who goes back to the prolific, Ballydownan Simone. Lad sold with a five star terminal index of €146, a five star replacement index of €99 and a calving figure of 8.4%. He was wrapped up by County Offaly man, Thomas Finnamore.

€3,350 for Kilbline 1 Lieutenant ET by Oscar exhibited by the Sugrue family from Bennettsbridge, Co. Kilkenny.

The next Society show and sale takes place in Tuam Mart, Co. Galway on Saturday the 6th of May 2017.