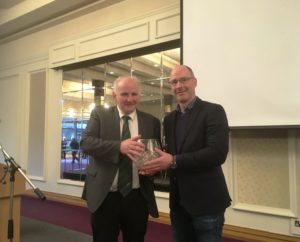 President of the ICCS, Kevin Maguire, presents the award for the Best Charolais Club in 2017 to Chairman of the Donegal Charolais Club, Brendan Mc Feely at the 2018 AGM

The Donegal Charolais Club was crowned the best Charolais Club in 2017 by the Irish Charolais Cattle Society at last Monday’s AGM in Mullingar. President of the Society, Kevin Maguire, described the Donegal Charolais Club as a credit to it’s members and the Charolais Breed. The Club organised a number of wonderful events in 2017, including a Open Day on Raymond Palmer’s suckler farm, a Calf Championships in Clonmany Show, YDP classes for its young members at local shows, as well as sponsoring Charolais cross Weanling shows and sales in Marts throughout the County.