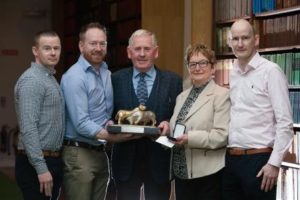 From L to R , Dave, Barry, Michael, Mary and Rory Quin with their RDS Champion of Champions Award at last week’s Award ceremony in the RDS

The Clenagh herd owned by Michael Quin and family from Newmarket – on – fergus in County Clare were the recipients of this year’s RDS Champion of Champions Award. The Council of the Irish Charolais Cattle Society awarded it to the Clenagh herd for their three in a row Champions from December 2016 to December 2017 at Premier Charolais Sales. 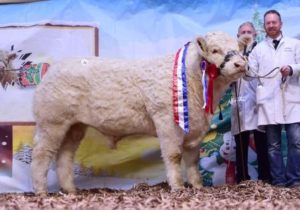 In December 2016, Clenagh Lyle ET won the Junior Male Champion at the Christmas Cracker Show and Sale. He went on to sell for the day’s top price of €13,000 to the well known Burradon pedigree Charolais herd in the UK. A son of Domino and Clenagh Tranquil, Lyle carried a wonderful set of Indexes which included a 5 star terminal index of €144, a 5 star replacement index of €80 and a calving figure of 6.9%.

In March 2017, Michael’s Heifer, Clenagh Jasmine ET won the Female Champion at the Premier Charolais Show and Sale. She would also go on to top the day’s female trade at €5,200. A daughter of Dromiskin Viceroy and the outstanding performance cow, Clenagh Tranquil, Jasmine sold with a perfect set of indexes, which included a terminal index of €162, a five star replacement index of €93 and a calving figure of 6.7%. 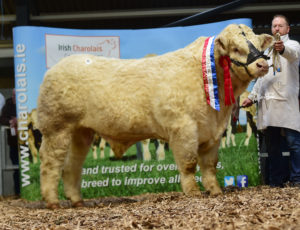 Then in December 2017, Clenagh Maserati cliched the three in a row for the Quin family, winning the Senior Male Champion at the Christmas Cracker Show and Sale. A son of Clonoulty Andraemon, Maserati carried a five star terminal index of €152 and went on to sell for €7,700. It is an outstanding achievement to win a Champion at any official Charolais Society Show and Sale, but to win three in a row at Premier Sales, is something which even the best much acknowledge as a remarkable achievement.