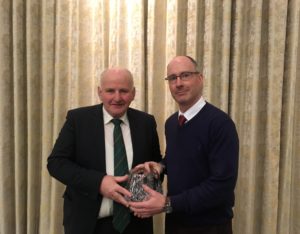 President of the ICCS, Kevin Maguire, presents the award for the ICCS Club of the Year 2018 to Brendan Mc Feely, who accepted the award on behalf of the Donegal Charolais Club

Kevin Maguire introduced the award for Club of the year in 2018, as recognition for active and progressive Charolais Clubs. The Donegal Charolais Club won the award in 2018 and have made it two in a row this year. Commenting on his selection, Kevin Maguire said, “the Donegal Charolais Club must be admired, the way they conduct their business, meeting’s, events and the way they look after their youth, is fantastic. They are one of the smallest Clubs in Ireland, and yet they are one of the most proactive, for that they should be rewarded.”