The Premier Charolais Sale took centre stage in Elphin on Saturday, and what a sale it produced. The demand for both Charolais bulls and heifers was phenomenal. Despite Covid restrictions and no ringside buyers, bulls and heifers sold to all corners of the Island, from Cork to Antrim, with seven selling across the Water to Scotland and Wales. Overall 79% of the bulls forward sold to an average of €4,493, despite the majority of the 74 bulls catalogued being present on the day. This was followed by an exceptional trade for Charolais heifers, which saw 71% of them sell to an average of €4,808. The words on many peoples lips at the end of the day was ‘the best Premier Sale in recent times’. This comes on the back of a great Christmas Cracker Sale in December, and the best sale in the history of the Society, the Elite Charolais Heifer Sale in November, which set a record average for the Charolais breed in Ireland. It is clear that the breed’s improvements in recent years in relation to calving ease and key terminal traits are coming home to roost with suckler farmers. 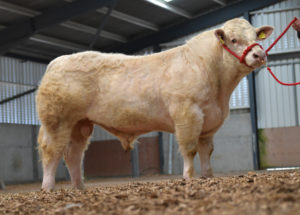 Cloonraddon Ricky who sold for the top price of €8,200

Leading the way in the bulls was Cloonraddon Ricky at €,8200, exhibited by Anthony Mc Dermott from County Roscommon. This high index bull catalogued with an attractive set of indexes, a calving figure of 6.4% on beef cows and carries one copy of the Q204X gene. A son of the popular AI sire Fiston and a Cavelands Fenian bred dam, the 14 month old Ricky was the choice of the National Cattle Breeding Centre in County Kildare. 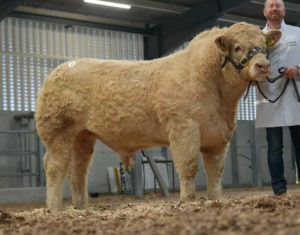 One of the earlier lots on the day, Clenagh Picasso ET from Michael Quin in County Clare proved one of the more attractive lots on the day, selling for the second highest price of €7,400. This 17 month old bull comes from a line which includes some of the breed’s heavy weights. He is a son of the great Domino and a CF 52 bred dam, going back to a Pirate bred cow. He sold with a massive terminal index of €181 and a calving figure of 7% on beef cows. Picasso will now join Brendan Regan’s Coneyisland Genetics in County Roscommon. 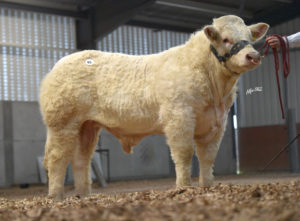 Bostonia Robynhood ET who sold for €6,800

Hitting the headlines next was Bostonia Robynhood ET from the Feeney brothers in County Sligo. A son of Hermes and the great show Heifer, Drumshane Mademoiselle, this young bull was always going to attract interest. At just 13 months old on the day of sale, he was one of the last lots through the ring and was snapped up at €6,800 by a Pedigree herd in Northern Ireland. 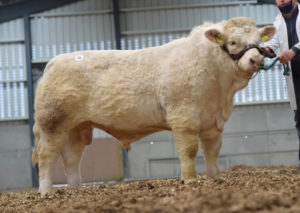 Scardaune Pius was up next at €6,200 from Oliver Conway in County Mayo. Another high index young bull with a five star terminal and replacement index, accompanied by a calving figure of just 5.1%. A son of the herd’s successful stock bull, Derryowen Harvey, Pius also carries two easy calving specialists in Nelson and Pinay on his dam’s side. Wrapping this one up was a suckler farmer from County Monaghan. 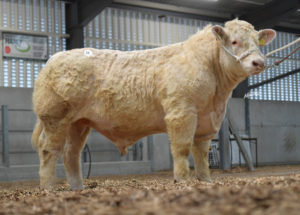 County Longford breeder Harry Noble traded his 14 month old Noble Romeo for €6,100. A son of the popular Bova AI sire Scardaune Mark and the homebred dam, Noble Jewel, Romeo sold with a five star terminal index of €140 and a calving figure of 5.6% on beef cows. He carries one copy of the F94L profit gene. This one went North to County Down. 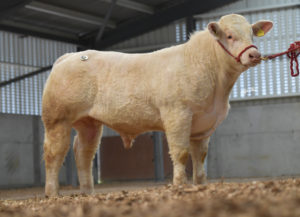 Jack Culloty from Castleisland in County Kerry made his long journey worthwhile, when he received a call of €6,100 for his 13 month old Blackroad Rocco. This high terminal index young bull is a son of the great CF 52 and a Pirate bred dam. Rocco carries one copy of the Q204X and F94L genes. Declan Mc Kenna from Northern Ireland had the final call on  this one. 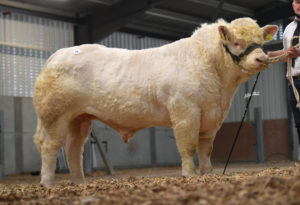 Jim Geoghegan from Streamstown in County Westmeath parted company with Lisnagre Parker ET for a sum of €6,000. This 16 month old bull is a son of Pirate and a Major bred, making him a full brother to many of the herd’s previous high priced animals. He catalogued with an impressive terminal index of €160 and carries one copy of the F94L gene. He sold to Pat Dillon from County Galway. 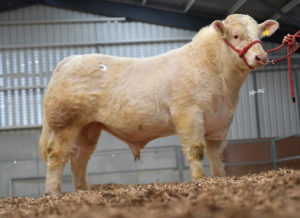 Local man Gerard Beirne from County Roscommon enjoyed success with Caldragh Pat ET, a son of Pottlereagh Mark and a CF 52 bred dam. This 15 month old bull displayed a five star terminal index of €166 and a calving figure of just 3.6% on beef cows. Buyer on this occasion was Stephen Fallon from Strokestown in County Roscommon. 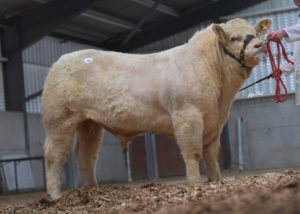 Kilvilcorris Pablo who sold for €5,600

Hitting the €5,600 mark was Kilvilcorris Pablo from Matt and PJ Ryan in County Tipperary. A son of Bunratty Mike Tyson and a Pirate bred dam, Pablo packed an impressive terminal index of €159 and a calving figure of just 4.2% on beef cows. This one sold across the Irish Sea to Owain Llyr in Wales. 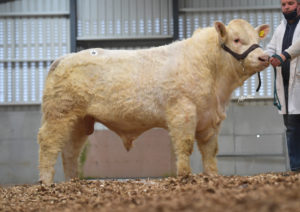 Oliver Conway was back in the limelight once again with Scardaune Pete, a 16 month old son of Nippur and a Derryowen Harvey bred dam. This bull exhibited one of the most decorative set of indexes in the catalogue, along with a calving figure of just 4.9% on beef cows. Pete sold to Ronan Gleeson from County Roscommon. 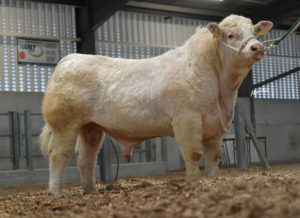 Noble Partner went under Tom Cox’s hammer at €5,200. Exhibited by Harry Noble from County Longford, Noble is a son CF 52 and a Cottage Devon bred dam. Despite lacking on indexes, the 16 month old Partner attracted an array of bids before eventually falling to Owain Llyr from Wales. 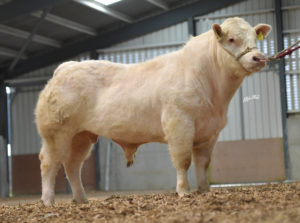 Cloonraddon Rocky who sold for €5,100

It was a fantastic day for Anthony Mc Dermott from Strokestown in County Roscommon, who carried on from his earlier success and sold Cloonraddon Rocky for €5,100. A son of Fiston and a Cavelands Fenian bred dam, Rocky is closely related to his stable mate and the sale topper, Cloonraddon Ricky. Once again he catalogued with an impressive display of indexes and a calving figure of 8.5% on beef cows. Rocky carries one copy of both myostatin genes. He was purchased by a County Galway suckler farmer.

Other leading prices in the bulls from Saturday’s Sale included: 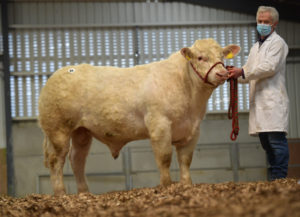 €5,000 for Corralara Ramsey sired by CF 52 and exhibited by Michael and Mary Mc Gowan from County Roscommon 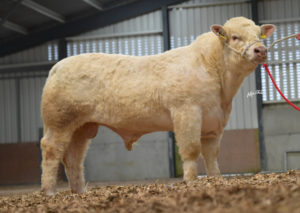 €5,000 for Hillhouse14 Padraig sired by Cavelands Fenian and exhibited by Alan Mc Candless from County Donegal 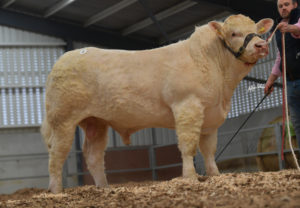 €5,000 for Roughan Pat sired by Roughan Gibraltar and exhibited by Pat Mc Clean from County Donegal

€4,800 for Culcashel Roy sired by Cavelands Fenian and exhibited by Charles Harkin from County Donegal

€4,600 for Fieldview Ronaldo ET sired by Goldstar Echo and exhibited by David Erskine from County Monaghan

€4,600 for Liscally Prince sired by Kelton Trident and exhibited by Jon Regan from County Leitrim 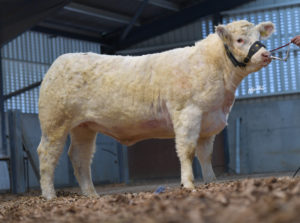 Roughan Pandora who sold for the top price of €8,000

Leading the female trade was Roughan Pandora from Pat Mc Clean in County Donegal. This rising two year old is a daughter of the herd’s successful stock bull, Roughan Dix De Coe. She sold in calf to Roughan Mourinho. Purchasers were the Dunne family of the Crockaun herd in County Kildare. 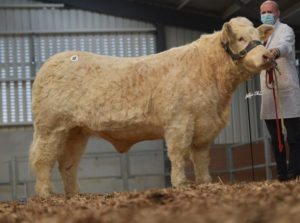 Next best in the female section was Glenree Olive who sold for €7,400, exhibited by John O Grady from County Galway. This 26 month old daughter of Nelson and a Prime Roberto bred dam sold with four star replacement index of €77 and a massive terminal index of €161, alongside a calving figure of just 4%. The Mc Govern brothers from County Sligo were highest bidders on this one. 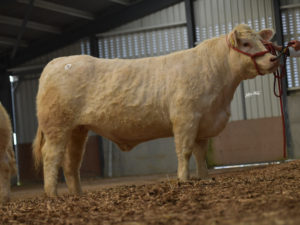 Basil and Victoria Kells enjoyed success with their 28 month heifer, Dalehill Ophelia, who went under the hammer at €6,500. A daughter of the in demand AI sire Fiston and a Cottage Devon bred dam, Ophelia packed a five star replacement index of €139. She will now join Austin Garvey’s pedigree herd outside Carrick on Shannon. 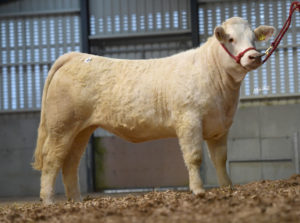 Macecrump Paulina ET who sold for €6,000

One of the youngest heifers on the day, Macecrump Paulina ET, attracted a flurry of online bids, before stopping at €6,000. A daughter of Major and a Pirate bred dam, Paulina sold to Oisin Cassidy from County Monaghan. She carries one copy of the F94L profit gene. 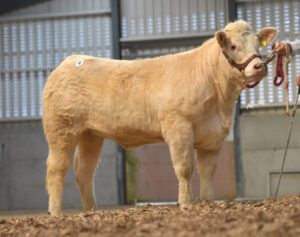 Whinfort Phoebe was next best at €6,000 from Geremy Mc Gonigle. This 18 month old daughter of the popular French sire, Bourgogne, and a Nippur bred dam, catalogued with a five star replacement index of €115. Phoebe attracted huge interest online, before eventually resting with Austin Garvey from outside Carrick on Shannon.

Pat Mc Clean from County Donegal wrapped up a great day at the Office, when he sold his third offering, Roughan Pippa for €5,400. This rising two year old is a daughter of Roughan London and a Roughan Divin bred dam. She sold to Noel Hyland from County Westmeath.