The Society hosted it’s first Autumn Sale in Tullamore on Saturday last. With 109 Charolais bulls catalogued, one would think it was always going to be a buyers market. However, a smaller number of bulls put forward for sale, accompanied by a solid demand for quality bulls, saw a clearance of 69%, with an average price of €3,807 being achieved. Despite a reduction in suckler cow numbers over recent years, recent data from the Irish Cattle Breeding Federation shows that Charolais are the only breed that substantially increased in usage from 2019 to 2020. This trend could clearly be seen on Saturday, with suckler and dairy farmers in the market place for top end Charolais bulls. The breeds improvements in calving ease and key terminal traits paying dividends. 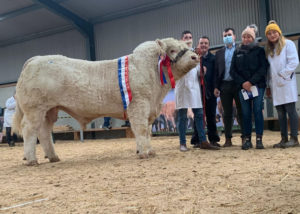 Stealing the show was the Overall Senior Champion, Ballym Rocco, exhibited by Louise and Colm Quinn from County Offaly. This outstanding son of Ballym Mate was a clear favourite from the outset, with judges Mark and Eoin Mc Govern wasting no time in tapping him out as their pick in the senior section. Born in April 2020, Rocco carries a massive terminal index of €170, a calving figure of 7.4%, and one copy of the Q204X myostatin gene. Having attracted interest from numerous parties, Tom Cox eventually dropped the hammer at €12,800 to Dovea Genetics. 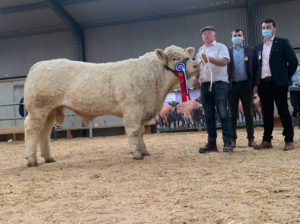 Next best was Jim Geoghegan from County Westmeath with Lisnagre Romio ET selling for €6,800. One of the younger lots on the day at just 14 months old, Romio was awarded the Reserve Junior Championship earlier in the day. He carries a wealth of old French greats in his lineage, with Jupiter, Major, and Hermes featuring prominently. Despite being short on indexes, Romio received bids from all corners of the ring before eventually being knocked down to Padraig Bollard from County Westmeath. 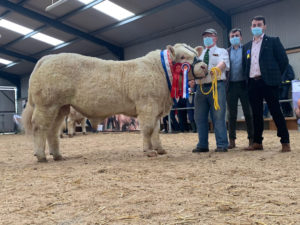 The Overall Junior Champion from the pre sale show, Goldstar Rossini ET, was next best in the sales ring at €5,600, for Martin Ryan from County Tipperary. This August 2020 born son of Goldstar Othello and a Major bred cow fought off some strong competition to take the junior accolade. He catalogued with a five star terminal index of €156 and a calving figure of 5.9%. This was also accompanied by one copy of the Q204X myostatin gene. He sold to a suckler farmer from County Wicklow. 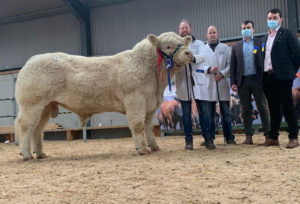 Up next was the Reserve Overall Senior Champion, Clenagh Rocket, for Michael Quin from County Clare. Rocket was a heavy terminally hitter, with Texan gie, CF 52 and Pirate to the fore in his pedigree. As well as carrying one copy of the F94L myostatin gene, he catalogued with a five star terminal index of €143 and a calving figure of 5.8%. Wrapping this one up at €5,400 was Les Babbington from County Monaghan.

John O Grady from County Galway received a call of €5,300 for his first prize winner, Glenree Rod. A son of Whitecliffe James and a Cavelands Fenian bred dam, this June 2020 born bull packed a formidable combination of phenotype and genotype. He carries a five star terminal and replacement index, along with one copy of the F94L profit gene. He will now take up residence in County Kildare.

John Fleury from Killyon in County Offaly had a successful day’s trading with his two classy young bulls. First up was the 15 month old Drumcullen Raffa, selling for €5,250. A son of the homebred Drumcullen Nevada 2, Raffa displayed a huge terminal index of €170, a calving figure of just 3.3%, and one copy of the F94L gene. He sold to a suckler farmer from County Donegal. John’s second entry, Drumcullen Ramses wasn’t far behind, selling at €5,000. At just 14 months old, this Prime Roberto son came to sale with a five star terminal index of €146 and a calving figure of just 6.2%. He went north to County Derry.

George Price from County Leitrim enjoyed a good day at the office, selling Cannaboe Ronaldo for €4,850. This June 2020 born bull is a son of Cavelands Fenian, out of a Lisnagre Elite bred dam. Another high terminal index sire, Ronaldo carries one copy of the Q204X gene. He was knocked down to a suckler farmer from County Kildare. Not far behind at €4,700 was Charles Harkin from County Donegal with Culcashel Roman. The Donegal bull is a son of Roughan Nixon, out of a Fiston bred dam. He displayed an impressive set of indexes along with a calving figure of 6%. He went west to a suckler farmer in County Galway.

€4,300 for Aughnasheelin Romeo ET sired by Pirate and exhibited by Michael Mc Girl from County Leitrim

€4,200 for Ballym Ryan 2 sired by Whitecliffe James and exhibited by Louise Quinn from County Offaly

€4,000 for Glebewest Royal sired by Fiston and exhibited by John Farrell from County Westmeath

€3,650 for Shessiagh Romeo sired by Tombapik and exhibited by Stephen Mc Grenaghan from County Donegal

€3,600 for Dalehill Rupert sired by Cavelands Fenian and exhibited by Basil and Victoria Kells from County Cavan

€3,600 for Goldstar Rodney sired by Goldstar Ludwig and exhibited by Martin Ryan from County Tipperary

€3,550 for Islandview Rockstar sired by Roughan Mischief and exhibited by Tommy Mc Laughlin from County Donegal

€3,500 for Terryville Ralph sired by Bourgogne and exhibited by Patsy Lynch from County Donegal

€3,500 for Culcashel River sired by Roughan Nixon and exhibited by Charles Harkin from County Donegal

The Society would like to wish all purchasers the very best of luck with their new bulls. The next Society sale is the Elite Charolais Heifer Sale, which will take place in Tullamore Mart, this Saturday the 13th of November.