The Society’s final spring bull sale of 2022 took place in Tullamore Mart on Saturday last. Once again numbers present on the day were well down on what was previously catalogued, with many selling on farm prior to the Sale.  It is fair to say the top end of the bulls sold exceptionally well, with the bottom tier of bulls finding it harder to find new homes. This has been the way with most of the Sales all Spring, a clear indication to breeders that quality is now paramount with commercial farmers. This was highlighted by the strong average sale price of €4,044, buyers obviously willing to pay that bit more for quality. 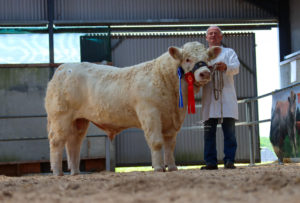 The highlight of the sale came in the form of Cloughbrack Sunrise, selling at €10,000 for Mattie Kelly, from Newbridge in County Galway. This classy 14 month old bull is a son of the French sire, Vosgien VF, who is available from the Charolais Society, and a Grimaldi bred dam. Not only did the Galway bred bull pick up the Reserve Championship in the pre-sale show, he also packed an impressive set of indexes along with a calving figure of just 3.3% on beef cows. He sold to a suckler herd in Northern Ireland. 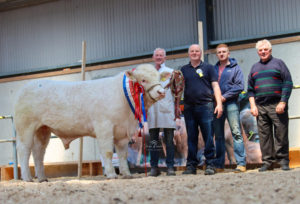 Aidan Farrell of the Williamstown herd in County Westmeath judged Mullawn Samson as the Overall Champion of the show. Bred by Austin Garvey in County Leitrim, this stylish young bull is a son CF 52 and a Pirate bred dam, making him a full brother to Mullawn Noble, who sold for €11,500 at the Premier Sale in 2018. Samson went to Sale with a five star terminal index of €168 and a calving figure of 7.2% on beef cows. After some lively bidding, Michael O’Reilly from County Leitrim secured Samson with a bid of €6,600 for his well known suckler herd. 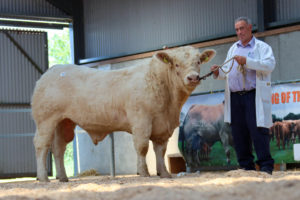 Selling at €5,800 was Clonaltra Sergeant exhibited by Terry Bradley from Moate in County Westmeath. A son of Fleetwood and a Cavelands Adam bred dam, this 16 month old bull catalogued with a five star terminal index of €148 and a calving figure of 5.2% on beef cows. Having the final call on this one was Basil Buchanan from Northern Ireland.

Pat Mc Clean from County Donegal received a call of €5,500 for one of the earlier lots, Roughan Rustard. This December 2020 born bull is a son of the homebred Roughan Nolag and a Roughan Feodal bred dam. Stars were in abundance on this one, along with one copy of the Q204X Myostatin gene. He went west with a suckler farmer from County Mayo.

Trading at €4,800 was Ballinroey Ronnie ET for Micahel Hanlon from County Longford. A son of CF 52 and Celtic Blondie, Ronnie is a full ET brother to a number of successful off spring from this flush. He displayed a massive five star terminal index of €172 along with one copy of the Q204X muscle gene. He sold to a suckler herd in County Waterford.

Derrinboy Sheamie was next best, going under Tom Cox’s hammer at €4,600. Exhibited by Aidan Gath from Kilcormac in County Offaly, this 16 month old bull is a son of Fiston and a Lisnagre Hansome bred dam. Sheamie offered one of the best set on indexes in the catalogue, which coincided with a calving figure of 5.4% and one copy of the Q gene. Wrapping this one up was Tom Bruton from County Meath.

County Cavan breeders Basil and Victoria Kells enjoyed a successful day’s trading, selling their 14 month old Dalehill Sampras for €4,400. A son of Fiston and a Cottage Devon bred dam, Sampras went to sale with a four star replacement index of €96, a five star terminal index of €138, and a calving figure of 8.9%. A suckler farmer from County Galway snapped this one up.

Ballyhaise Agricultural College also splashed out when they purchased Hawkswood Sam for €4,300. Exhibited by local breeder Joseph Whittaker, this 14 month old bull is a son of Pottlereagh Mark and a Pirate bred dam. He carries an attractive five star terminal index of €161, a calving figure of just 3.9%, and possesses one copy of the F94L profit gene.

This concludes the Society Sales for this Spring. The next Society sale will take place in the Autumn. The Society would like to wish all buyers the very best of luck with their purchases from Society sales this year.