The November sale of Charolais bulls in Tullamore provided a flying trade for young bulls. With over 100 bulls catalogued, buyers had their pick and choice, leaving early lots finding it difficult to get moving. However, when the sale did warm up, over 75% of bulls forward found new homes, selling at an average price of €3,550. The strong trade for Charolais cross weanling’s clearly driving demand for quality Charolais bulls.

It was a successful day for the westerners, with county Mayo breeder Alan Wood selling the highest priced bull of the day for €7,000. Alan’s bull Crossmolina Logan is a June 2015 born son of Grimaldi. One of the highest terminal index bulls in the catalogue at €150, Logan attracted huge interest all day. The first prize winner in his class was knocked down to James Hoare from Maynooth, Co. Kildare after a flurry of bids. 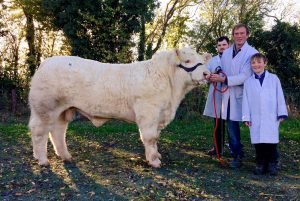 County Sligo breeders Brendan and Greg Feeney picked up the championship award earlier in the day with Bostonia Lorenzo 2 ET, under Judge Pat Mc Clean of the renowned Roughan pedigree Charolais herd. This September 2015 born son of the UK sire Elgin Davinci has had a wonderful year in the show ring picking up numerous red rosettes around the country. He sold to John Kearney from Ferrybank, Co. Waterford for €5,100. The reserve champion went to Looby Larson exhibited by James Phelan from Bagenalstown, Co. Carlow. The September 2015 born son of Goldstar Echo was purchased by Maureen Farrell from Strokestown, Co. Roscommon for €3,200. 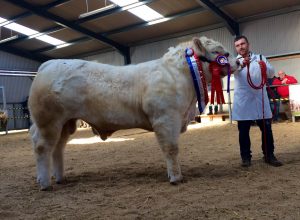 Aidan Farrell from Moate, Co. Westmeath went home a happy man after selling his two bulls for a total of €10,500. His first prize winner at €5,500 was Williamstown Liam sired by the renowned CF 52. This July 2015 born bull sold with a five star terminal index of €139 and heads to Northern Ireland. Aidan’s second bull, Williamstown Lance sold for €5,000. Another first prize winner in his class, Lance is a son of the herd’s stock bull Cavelands Adam. He sold with a terminal index of €140 and was snapped up by John Ryan from Tuam, Co. Galway.

Next best at €5,000 was Ballinvalley Luiz exhibited by Michael Kavanagh from Oldcastle, Co. Meath. This Cavelands Fenian son was one of the highest index bulls catalogued and sold to Fabian Fahy from Tuam, Co. Galway. Michael also sold Ballinvalley Lance for €3,500, again another high terminal index bull at €158. John Fleury from Birr, Co. Offaly then sold Drumcullen Lionel to fellow Offaly man Dermot Grogan for €5,000. This September 2015 born bull is a son of the herd’s former stock bull Vexour Granville.

Fermoyle Levis went under the hammer at €4,600 for William Scanlon from Westport, Co. Mayo. This September 2015 born bull is a son of the popular AI sire Fiston. Two high terminal index sons of CF 52 then traded hands for €4,500. The first was Sliabhbawn Loneranger from James Duke, Strokestown, Co. Roscommon, he sold to county Cork. The second bull at €4,500 was the first prize winner Aughnasheelin Lewis ET exhibited by Michael Mc Girl from Aughnasheelin, Co. Leitrim.

The next Irish Charolais Cattle Society show and sale is the Christmas Cracker which will take place on Saturday the 3rd of December in Elphin mart, Co. Roscommon.