Astounding crowds descended upon Elphin mart to witness this year’s Christmas cracker show and sale which topped at €13,000 for the junior male champion of the show, Clenagh Lyle et. Overall there was a good trade in the bull ring, with 80% of bulls selling to an average of €4,600. In the heifer ring buyers where more selective, with 52% of heifers selling for an average of €4,035. It was a memorable day, as the former Secretary of the Society Nuala Hourihane received a presentation to mark her retirement from the Society which occurred earlier in the year. Nuala has given the Society a wonderful service over the years and we all wish her the very best in the future. 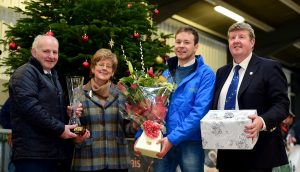 President of the ICCS Kevin Maguire makes a presentation to former Secretary, Nuala Hourihane along with Nevan Mc Kiernan ICCS and Andrew Hornell, chairman of the BCCS. 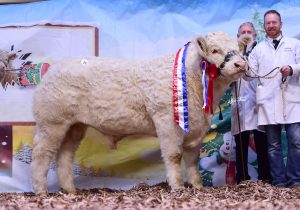 The sale topper, Clenagh Lyle et exhibited by Michael Quin from Newmarket on Fergus, Co. Clare capped of a wonderful year, as he picked up the junior male championship and top price of the day at €13,000. This stylish young bull attracted a lot of attention all year in the show ring, winning the reserve male championship at the National Livestock Show in Tullamore in August, and the senior male calf championship at the National Charolais show in September. Once again he caught the eye of Judge Ian Campbell of the Thrunton herd, who took care of the male judging. Lyle is sired by Domino, out of the prolific breeding cow in the Quinn’s herd Clenagh Tranquil, who is a daughter of the popular Pirate. He ticks all the boxes on paper, with a 5 star terminal index of €144, a 5 star replacement index of €80 and a calving figure of just 6.9%. He will now join the Burradon pedigree Charolais herd in Northumberland, England, which is owned by Messrs Curry. 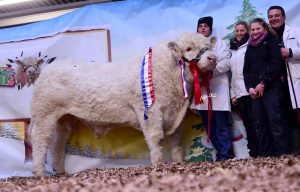 The senior male championship went to Ballym Louis XIV exhibited by Louise and Colm Quinn from Edenderry, Co. Offaly. This May 2015 born bull is a son of the Quinn’s homebred sire, Ballym Henri who was part of the Maternal Gene Ireland Programme. His dam, the Utrillo-Bp daughter, Ballym Hope is one of the best breeding cows in the herd. Louis is a high index bull on paper, with a 5 star Terminal index of €134, a 5 star replacement index of €58 and a calving figure of 8%. This bull was not sold on the day as he is being retained in the Ballym herd as a junior stock bull. 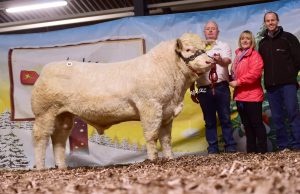 Lisnagre Laurence et who sold for the second highest price of €11,000

Hitting the headlines next at €11,000 was Lisnagre Laurence et exhibited by Jim Geoghean from Mullingar, Co. Westmeath. This September 2015 born son of Major and the legendary Ballydownan Simone, lived up to his performance packed pedigree in the sales ring before being knocked down to Sean Crummy, Co. Roscommon. Jim also received €4,500 for his September 2015 born Texan gie son, Lisnagre Lomen et. 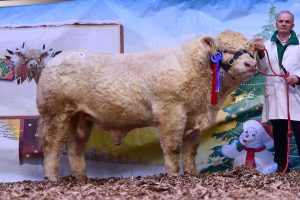 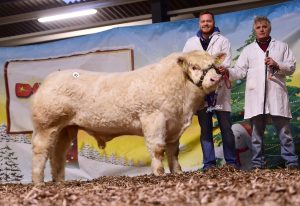 Three bulls then traded hands at €7,000. The first was Knockmoyle 10 Loki et exhibited by county Clare breeders Gerry and Margaret Lynch. Sired by Pirate out of the well-bred CF 52 daughter Ashleigh Cleo, Loki was secured by Dovea AI. Next at €7,000 was Whinfort Luca exhibited by Geremy Mc Gonigle from Rossnowlagh Co. Donegal. This Cavelands Fenian son was one of the highest Replacement index bulls catalogued at €85. He was snapped up by Rose Divitt from Inagh, Co. Clare. 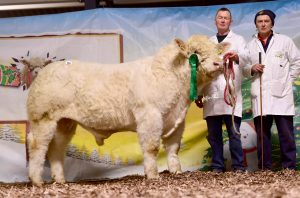 Kilvilcorris Luke from county Tipperary breeders Matt and PJ Ryan was the other bull to exchange hands at €7,000. This September 2015 born bull sold with a proud pedigree which included Prime Roberto, Excellent and CF 52. He found his new home in Ballydangan, Co. Westmeath with Yvonne Kenny. The Ryan’s second bull, Kilvilcorris Lieutenant by CF 52 sold for €5,100 to Martin Lenehan from Ballinful, Co. Sligo. Their successful day in the sales ring did not stop there, as they sold their third bull, Kilvilcorris Lord 2 back to county Tipperary for €4,600, another son of CF 52. 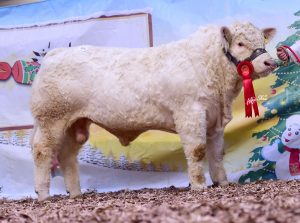 Two bulls then went under the hammer at €6,800. The first prize winner in the last class Fieldview Lonestar et exhibited by David Erskine from Crosses, Co. Monaghan was the first. This November 2015 born son of Anside Foreman attracted a lot of positive attention all day, before selling to John Mc Bride, Plumbridge, Co. Tyrone. 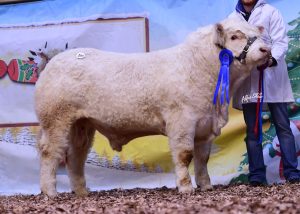 Gerry and Margaret Lynch from county Clare where back in the limelight once again, when they sold their second prize winner Knockmoyle 10 Leroy et for €6,800. This Texan gie son who is also the progeny of the previous mentioned Ashleigh Cleo sold to Noel Mc Illwaine from Plumbridge, Co. Tyrone. 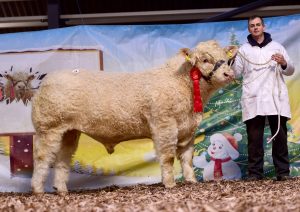 Next up at €6,300 was Crossdrum 14 Leo from Stephen Farrelly, Oldcastle, Co. Westmeath. This powerful September 2015 born son of Dromiskin Viceroy secured first prize in his class early in the day, before selling to Thomas Kerin from Bellharbour, Co. Clare. 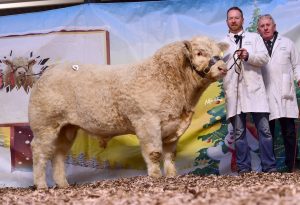 Two bulls shared the same price tag of €6,000. The first came from the same home as the sale topper in the form of Clenagh Lexon exhibited by Michael Quin from county Clare. This September 2015 born son of Pirate was shown successfully all summer, picking up numerous rosettes along the way. He was secured by Gerry Nerney from Garrymaddock, Vicarstown, Co. Laois. 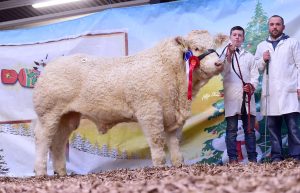 Next at €6,000 was the reserve junior champion of the day, Brocca Lee et exhibited by John Barry Moran from Athlone, Co. Westmeath. This Maerdy Impeccable son sold to Clare Ferris, Millisle, Newtownards, Co. Down.

A pre-sale favourite, Flojo Leonardo et by Thrunton Voldermont sold for €5,800 to Northern Ireland. Exhibited by John Gallen from Lifford, Co. Donegal, this bull’s two full brothers have been senior champions at the Christmas Cracker show and sale in the past. 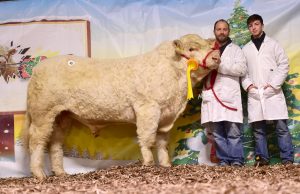 A call of €5,600 then wrapped up Ronnamount Lough by Pirate for Neville Myles from Ballyshannon, Co. Donegal. Exhibited by Chris Mc Carthy from Mullingar, Co. Westmeath, Lough sold with a 5 star terminal index of €147 and a 5 star replacement index of €60. 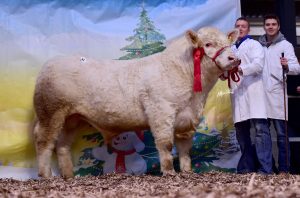 Vincent Callaghan from Swinfoprd, Co. Mayo went home a happy man after he received a total of €10,500 for his two bulls. His first bull at €5,500 was Tonroe Luke by Lisnagre Elite who sold to Thomas Finnegan from Ballyhaunis, Co. Mayo. Vincent’s other bull, Tonroe Lesley who is by Pirate then completed a successful day as he sold for €5,000 to Brendan Feeney, Scurmore, Enniscrone, Co. Sligo.

Other Leading prices in the bulls included: 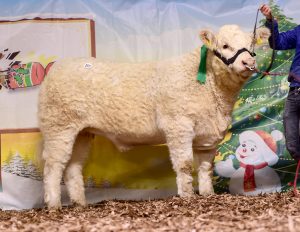 Topping the trade at €8,200 in the female ring was father and son duo, Brendan and Niall Canning from Rosses Point, Co. Sligo with their October 2015 born heifer, Sagesse Lauren et. This Farmleigh Ludovic daughter has enjoyed a tremendous year in the show ring, picking up the reserve female championship at the National Livestock Show in Tullamore in August, and winning her class at the National Charolais Show in September. She was wrapped up by a new breeder from county Cavan. 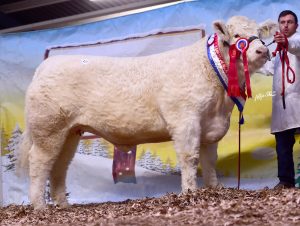 Securing the female championship earlier in the day was the Feeney brothers from Enniscrone, Co. Sligo with Bostonia Joy et. Judge Esmor Evans from the Maerdy herd in Wales wasted no time in awarding the championship to the powerful, August 2014 born daughter of Elgin Davinci. Joy, who was champion at numerous summer shows, was withdrawn from the ring unsold at €9,500 and returns to the Bostonia herd for breeding.

Next best in the female’s sales ring was €7,200 for Grangwood Jeanie, exhibited by Jerry and Kay O’ Keeffe from Knocklong, Co. Limerick. Like the champion, this April 2014 born daughter of Inverlochy Ferdie has enjoyed a successful past in the show ring. She sold in calf to Thrunton Bonjovi to Seamus Bradley, Plumbridge, Co. Tyrone. 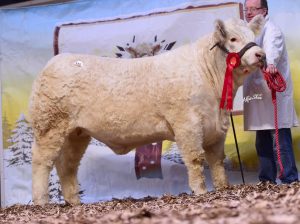 Martin Ryan and family from Thurles, Co. Tipperary received a total sum of €14,400 for their three female offerings. The first at €6,100 was the first prize winner Goldstar Lavender et by Goldstar Echo. This September 2015 born heifer comes from a fine cow line which includes Jupiter and Meillard Rj. She sold to young Michael Carey from Sionhill Charolais, Killucan, Co. Westmeath. Next from the Ryan’s was the much anticipated Goldstar Lulu, again by Goldstar Echo. This October 2016 born heifer is a daughter of the wonderful, French bred show cow, Goldstar Falkland. She sold to new breeders Brian and Eamon Duignan from Cornafean, Co. Cavan for €5,500. The Ryan’s final offering, Goldstar Linda by Nelson sold for €2,800 to Martin Cullen, Killeshandra, Co. Cavan. 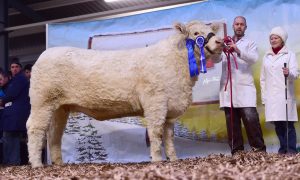 Noel and Timothey Sugrue from Kilbline Charolais, county Kilkenny secured the reserve female champion of the show that morning. The huge daughter of Hutch went under the hammer at €5,800 and will now join Patrick and Gerard Mc Laughlin’s, Ballylannon Charolais herd in county Donegal. 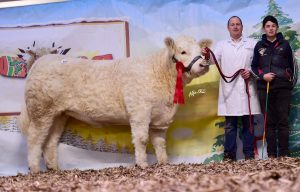 Another first prize winner from the show ring, Breaghwyhill Lisa then traded hands for €5,200. The March 2015 born daughter of Doonally Nicefor was exhibited by Eamon and Daniel O’ Connor from Ballinfull, Co. Sligo. She was also secured by Seamus Bradley from Plumbridge, Co. Tyrone.

The next Society show and sale of bulls will take place in Tullamore mart on Saturday the 11th of February 2017.