Charolais bulls met a solid trade in Tullamore on Saturday last to kick start the 2017 ICCS spring sales. Quality bulls with low calving figures and high indexes where particularly in demand, with 69% of bulls on offer selling to an average of €3,659. Landing the overall championship of the show under judge Paddy Farrelly of the Dromiskin herd in county Louth, was Crossmolina Marcus exhibited by Alan Wood from Crossmolina, Co. Mayo. Marcus is a son of the UK sire, Alwent Goldbar ET and Crosssmolina Grainne, a daughter of the renowned french sire, Major. Just 13 months old on the day, he sold with a five star terminal index of €137 and a five star replacement index of €74. He was knocked down at €4,800 to fellow Mayo man, Martin Gilroy from Ballina. 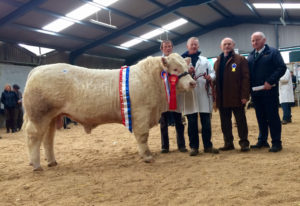 Picking up the reserve championship was county Leitrim breeder, Michael Kiernan with his Cloverfield Excellent son, Gallaway Lanzac. Born in October 2015, Lanzac carried a five star terminal index of €130 and dropped to James Nagle from Ennistymon, Co. Clare for €3,000. Michael’s day did not stop there, as he also sold Gallaway Lake Side ET for €4,000 to Pat Lawlor, Naas, Co. Kildare. Lake side displayed a perfect set of indexes on paper, with a pedigree to match, which included Major, Meillard Rj and Empereur. 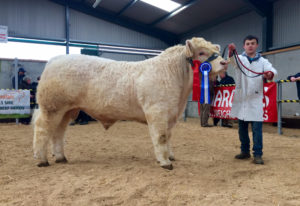 However it was new breeders, John and Brenda Murphy from Enniscorthy, Co. Wexford who stole the limelight in the sales ring, as they sold their two CF 52 sons for a total of €11,600. First to go under the hammer at €5,500 was Garryphelim Leader. This September 2015 born son of Galbally Graceful carried a huge terminal index of €151. He found his new home with Michael O’ Sullivan, Cahirciveen, Co. Kerry. 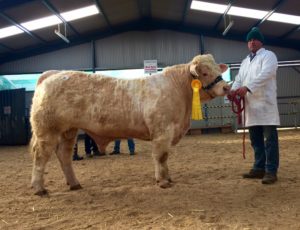 Garryphelim Leader who sold for €5,500 with breeder John Murphy.

Up next was the sale topper, Garryphelim Lar. Another high terminal bull with an index value of €164, Lar is a son of the Texan gie daughter, Galbally Debbie. Having earlier picked up the red rosette in his class, Lar topped the sale at €6,100, selling to Edmund Burns from Lattin, Co. Tipperary. 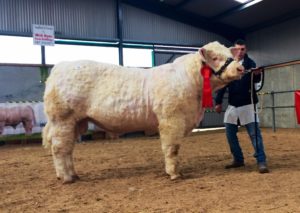 Next best at €5,100 was the powerful Liscally Eti son, Bostonia Littlejon ET, exhibited by the Feeney brothers from Enniscrone, Co. Sligo. This massive September 2015 born son of the UK bred cow, Maerdy Vena, stood top of the line in his class in the pre-sale show. One of the highest index bulls catalogued, Littlejon sold with a five star terminal index of €137, a five star replacement index of €73 and a calving figure of 7.4%. He was snapped up by Peter Fahy, Tuam, Co. Galway. 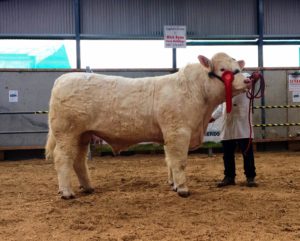 Also hitting the €5,000 mark was Sliabhbloom Lucky lad exhibited by Daniel Weston from Meelick, Rosenallis, Co. Laois. A much fancied bull all day, Lucky Lad came first in his class in the pre-sale show. Sired by the noted Pirate, he carried a whopping five star terminal index of €153, a five star replacement index of €69 and a calving figure of 7.6%. He headed North East with Paddy Tiernan from county Louth. Daniel rounded of a successful day, as he sold his other Pirate sired bull, Sliabhbloom Landlord for €3,700 to Teresa Mc Keown from Dundalk, Co. Louth. This October 2015 born bull was one of the lowest calving index bulls catalogued at 5.9%.

Regular seller at the sales, Pat Mc Clean from the Roughan herd in county Donegal enjoyed a productive day’s selling. First up for him was Roughan Lenard, a son of Roughan Dix De Coe. Born in August 2015, Lenard was one of the highest replacement index bulls catalogued with a value €76 and calving figure of just 6.2%. He went north with Daniel Mc Garel for €5,000. Roughan Leno, a son of the herd’s other stock bull, Roughan Enzo, then traded hands at €4,800. Leno sold with a neat spread of figures on both the terminal and replacement indexes, accompanied by a calving figure of 7.2%. He was purchased by Marian Fox from Ballinlough, Co. Roscommon.

Next best in the sales ring at €4,700 was Tullaghan Lawrence exhibited by Michael Daniel Daly from Tullaghan, Co. Leitrim. This October 2015 born son of the french sire, Excellent, carried a five star terminal index value of €140 and a calving figure of just 6.4%. Not far behind at €4,600 was Tullyvillage Luke from Willie Flynn, Newbridge, Ballinasloe, Co. Galway. This son of the easy calving french sire, Malicieux, was picture perfect on paper, selling with a five star terminal index of €135, a five star replacement index of €62 and a calving figure of 6.1%. He found his new home with Aidan O’ Grady from county Sligo.

Changing hands then at €4,400 was Maghermore Lee ET exhibited by Michael Grant from Buncrana, Co. Donegal. This high terminal index bull certainly possessed two of the weanling producers favorites in his pedigree, in Enfield Plexus and CF 52. It was no surprise he was purchased by Sean Mc Govern from Killeshandra, Co. Cavan, noted for his top quality Charolais weanlings in Carrigallen mart every year.  Chris Mc Carthy from Crookedwood, Co. Westmeath then received a call of €4,200 for his October 2015 born, Ronnamount Leader. Another son of the fore mentioned Pirate, this high index bull carried Oscar and CF 52 in his back pedigree.

The next Society show and sale is the Premier Charolais show and sale which will take place in Elphin mart, Co. Roscommon on Saturday the 25th of March 2017.