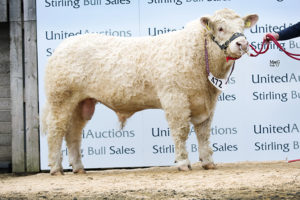 Woodpark Longbow sired by the Irish bred Deeside Gulliver sold for the third top price of 16,000 gns at the recent Stirling bull sales in Scotland. Longbow who was bred and exhibited by Will Shortt from Omagh, Co. Tyrone was one of the youngest lots for sale on the day at just 15 months old. His sire, Deeside Gulliver who is a son of the french bull, Esperanto, was bred by the Mc Cabe’s from Ardee, Co. Louth. Longbow was snapped up by Jan Boomaars of the well known Vexour herd in Surrey. 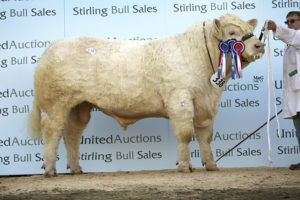 The top priced bull on the day at 25,000 gns was the reserve supreme and reserve senior champion Gretnahouse Lord, bred and exhibited by Alastair Houston, Gretna Green, Dumfries-shire. Lord who is a 21 month old son of the 17,000 gns, Balthayock Gladiator was secured by Brendan and Greg Feeney from Co. Sligo to join their Bostonia herd in Enniscrone.