Skip to content
Lisnagre Jessy has recently been awarded this year’s RDS champion of champions award. This bull was a first prize winner at the National Charolais Show in September 2015. He then went on to win the senior male champion at the Premier Charolais show and sale in March 2016, where he sold for the joint top price of €10,500.

Lisnagre Jessy pictured at the 2016 Premier Charolais show and sale with breeders Jim and his wife Catherine Geoghean.
Jessy was bred and exhibited by Jim and Catherine Geoghean from Streamstown, Mullingar, Co. Westmeath. He was sired by the noted NCBC sire, Lisnagre Elite, who was also bred by Jim Geoghean. Jessy has a 5 star terminal index of €149, and is a worthy winner of the 2017 RDS champion of champions award. 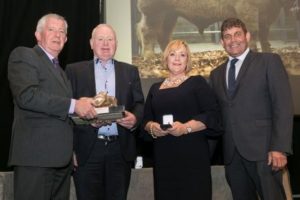 Chairman of the RDS Committee of Agriculture and Rural Affairs, Tom Kirley and Minister of State for Food, Forestry and Horticulture, Andrew Doyle presents the RDS champion of champions award for 2017 to Jim and Catherine Geoghean.