Yesterday’s show and sale of bulls in Tullamore produced a tremendous trade for Charolais bulls from start to finish. Trade topped at €6,800 and 88% of the bulls on offer sold to an average of €3,518. Refreshing to see such a demand at this late stage in the year, and a true reflection of the current performance of Charolais cross cattle in the commercial market. The presence of northern and overseas customers did help boost the trade, with four bulls going North and three bulls going to Scotland. 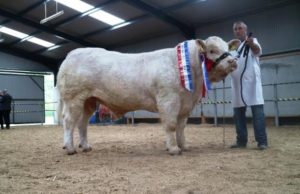 The sale topper came in the form of Derrylough Leader, the pre-sale champion exhibited by Thomas Connor from Kenagh, Co. Longford. A son of the Bova AI bull, Hideal, Leader carries a massive five star terminal index of €186 and a calving figure of 8.7%. The champion found his new home with fellow Longford man, Padraic Hegarty.

Next best in the sales ring at €5,600 was the third prize winner from the first class, Dolland Luke. Exhibited by Kevin Molloy from County Dublin, this November 2015 born son of the noted NCBC sire, Cavelands Fenian sold with a solid set of figures comprising of a five star terminal index of €140, a five star replacement index of €94 and a calving figure of 6.9%. This bull went North with Ivan Hughes from County Armagh. 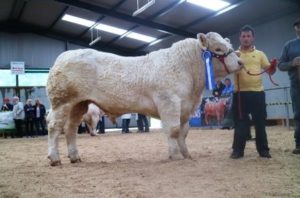 Hitting the €5,200 mark then was the reserve champion of the show, Baurnafea Major et, a January 2016 born son of the ever consistent, Goldstar Echo. Exhibitor here was John Bambrick from Castlewarren, Co. Kilkenny. The huge Major was snapped up by Aaron O’ Rourke from Newry in County Down.

Not far behind the Kilkenny bull at €5,100 was yet another Dolland bred bull from Kevin Molloy. Once again a son of the fore mentioned, Cavelands Fenian. Dolland Lewis 2 went under the hammer with a perfect set of indexes and a red rosette to match from the first class of bulls under Judge Sean Mc Govern from Clogher in County Tyrone. The attractive Lewis eventually fell to Thomas Corcoran from County Galway after some lively bidding.

Two lots then traded at €4,800. The first of which was Aquanchoua Marco from County Cavan man, Peter Mc Loughlin. A son of the renowned CF 52, this February 2016 born bull sold with a five star terminal index of €135 and a calving figure of 8.5%. Sharing the same price tag of €4,800 was Aghafad Major exhibited by Edward Walshe from Carrickmacross, Co. Monaghan. This 14 month old son of Indurain caught a lot of attention all day before eventually falling to Pat Cox from Kilglass, Co. Roscommon.

Next best at €4,200 was Coshleens Meillard, a February 2016 born son of the french bred Nectargerc. Bred and exhibited by Conal Tiernan from Elphin, Co. Roscommon, this bull went south with Tony Harrington from County Waterford. Also hitting the €4,200 mark was Dalehill Miley, yet another son of CF 52. This April 2016 born bull was bred and exhibited by Basil Kells from Killeshandra, Co. Cavan.

Regular buyer Billy Glazebrook from Strathaven, Scotland had a successful day’s buying, taking three bulls back across the Irish Sea. The first of these came in the form of Roonagh Mark at €4,000, a 14 month old son of the NCBC sire, Gedeon. This powerful, well made bull who was exhibited by Tony Lyons from Westport, Co. Mayo carried both Mogador and CF 52 in his back pedigree. Cloughbrack Maverick, a January 2016 born son of Alwent Goldbar was the next bull snapped up by the Scottish man at €3,600. Maverick was bred and exhibited by well known Galway breeders, Mattie and Kevin Kelly. Filling Mr Glazebrook’s quota was the 16 month old, Caltun Monty exhibited by Maria Calvey from Westport, Co. Mayo. This quality, well made bull who is sired by Fleetwood went under the hammer at €3,500.

County Limerick breeder, Declan Ambrose from Athea had a productive day in the sales ring as he sold Turraree Larry for €3,900. A son of Fiston, out a CF 51 dam, Larry sold with an attractive calving figure of 6.8%, finding his new home with Declan Kelly from County Galway. Sliabhbloom Leader exhibited by Daniel Weston from County Laois quickly followed at €3,500. A December 2015 born son of LGL, this bull carried a huge five star terminal index of €152 and a calving figure of 9%.

The UK sire Alwent Goldbar was back in action once again, when another son of his, Kye Mario traded at €3,500. One of the youngest bulls catalogued at just over 12 months, Mario carries both Clonoulty Andraemon and CF 52 in his back pedigree. The young bull who was exhibited by Mattie Dockery from Elphin, Co. Roscommon was also one of the highest index bulls catalogued with a five star terminal index of €156 and a five star replacement index of 94. The final bull to hit the €3,500 mark was the County Meath bull, Clonmahon Marty exhibited by Eddie Daly from Summerhill. It would only be fitting that the February 2016 born bull would be a son of no other, only CF 52.

The next Society event is the YDP workshop / Open day  which takes place at Bostonia Charolais in Enniscrone, Co. Sligo on Sunday the 11th of June, starting at 11 am. All Welcome.  Full details are available on the home page of our website at www.charolais.ie