It is expected that the event will be held in August of 2019 to coincide with the National Livestock Show in Tullamore. The week long event will give Irish breeders the opportunity to showcase the quality of Charolais cattle we have here in Ireland on a World stage. The Congress will be made up of delegates from countries all over the World. For more information on Charolais International go to their website at https://www.charolaisinternational.com/ 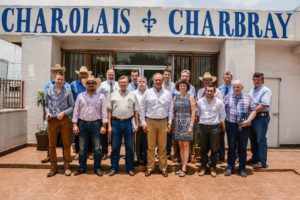 Attendees at the 2017 Charolais International AGM in Mexico