Despite the harsh weather conditions, almost 50 Charolais cattle turned out at Inishowen agricultural show over the weekend. Judge for the day, Mr. Will Shortt of the Woodpark pedigree Charolais herd described the cattle in front of him as “as good as you would see anywhere”. 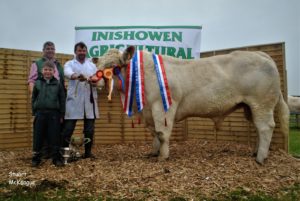 Local breeder Tommy Mc Laughlin took home the overall Charolais champion with his June 2015 born stock bull, Roughan Louis 2. The impressive two year old was later selected as the best bull of the show. Sired by Roughan Echo 2 and out of a Roughan bred dam by Roughan Divin, Louis 2 was purchased privately by Mr. Mc Laughlin for his Islandview herd earlier this spring. 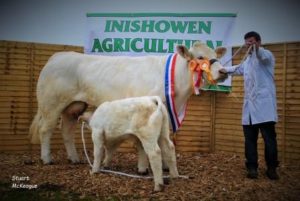 Reserve champion & senior female champion went to Bostonia Joy Et, a August 2014 born daughter of Elgin Davinci from a Major bred dam. Exhibited by the Feeney brother’s from County Sligo, Joy is no stranger to the show ring having picked up a string of red tickets and championships as a heifer. She was shown accompanied by her Pirate bred bull calf at foot. 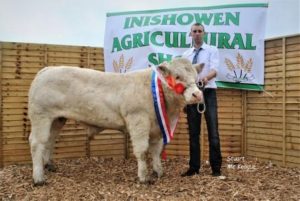 In the hotly anticipated north west Charolais calf championship, it was Liscally Magic ET bred by Jon & Lewis Regan from County Leitrim who came out on top. This September 2016 born son of Balmyle Vagabond and a home bred Padirac dam was tapped out as champion by Mr. Shortt after standing top of the line in a strong senior male calf class. In reserve was Pat Mc Clean’s October 2016 born heifer calf, Roughan Madilin by his home bred stock bull, Roughan Dix De Coe and a home bred dam by Roughan Fleming.

To cap of a great day for Charolais, it was the Fury action bred Charolais X heifer owned by Roy & Clive Stevenson who claimed the overall commercial champion. 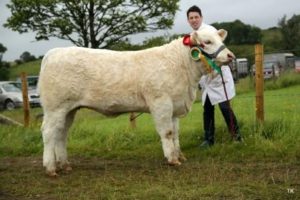 Meanwhile in County Sligo, Father and son duo, Brendan and Niall Canning had a productive day at Riverstown show. Hitting the headlines and securing the champion Charolais for the Rosses Point men was their September 2016 born heifer, Sagesse Martha ET, a french bred daughter of  Adonis and Contesse.