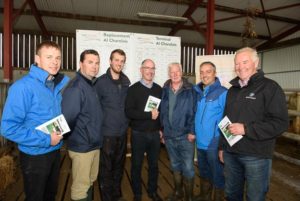 The Donegal Charolais club held a farm walk on Raymond and Margaret Palmer’s suckler farm in Castlefin, Co. Donegal on Wednesday evening last. The Palmer’s run a sixty cow suckler herd, which is split between autumn and spring calving. The herd of cows is made up of a mixed batch of Simmental, Limousin and a small number of Charolais cross cows. There is two Charolais stock bulls run on the farm. Raymond’s explanation for constantly using Charolais is simple ” Charolais deliver weight for age like no other breed”. The current stock bull on the farm is the Blelack Digger son, Carrickbrack96 Jordn, who was purchased at the 2015 Christmas Cracker show and sale. His first crop of calves look extremely promising. 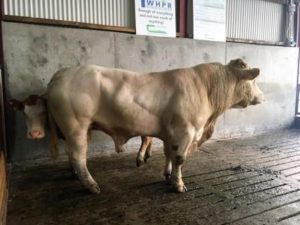 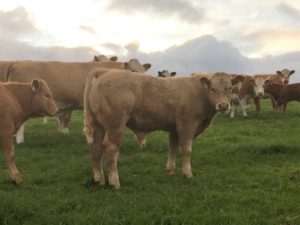 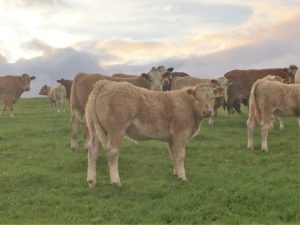 The average calving interval of the herd is 368 days, Raymond hopes to get this below 365 days this year. The number of calves produced per cow per year is 0.97, which is up there with the best performing suckler herds in the country. The male progeny on the farm is always sold as yearling’s, while the females are finished of the farm between 18 – 24 months. The advantage of using Charolais is they give Raymond phenomenal weight for age at a year old, and the heifers kill out ideally for market specifications at 20 months. 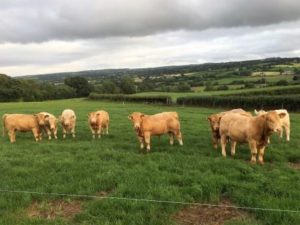 The eleven Charolais weanling bulls which were born last autumn weigh on average 464 kg. They have a average daily live weight gain of 1.35 kg/day since birth. Since weaning in May, they have gained on average 1.66 kg/day. The remarkable thing about their performance, is the fact they were only introduced to meal five week’s ago. Currently they are on 4 kg/head per day. Their primary diet is top quality grass, which on the Palmer’s farm is exceptional. These weanling’s are the progeny of Trenamullen Homer, a Sesame bred Charolais bull which was used in the herd. 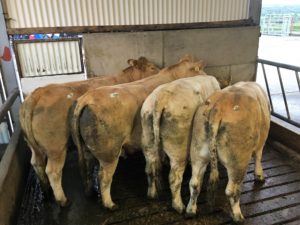 Below are the kill out’s of some Charolais cross heifers which were finished on the farm recently:

A enjoyable and informative night was had by all, the cattle and the hospitality certainly did not disappoint. Speakers on the night included Basil Bothwell from ICBF, who talked through what buyer’s should look for when purchasing young bulls. Nevan Mc Kiernan from the Irish Charolais Cattle Society discussed the highest replacement and terminal index Charolais bulls currently available in Irish AI. Suckler farmer Raymond Palmer and his Teagasc adviser Gary Fisher outlined the performance statistics of the cattle on the farm and the factors which affect their performance. They also explained the grassland management practices implemented on the farm. The final speaker on the night was Aidan Murray, well known Teagasc beef specialist. Aidan analysed the herd’s key performance indicator’s and explained how well the herd compares with the National suckler herd. 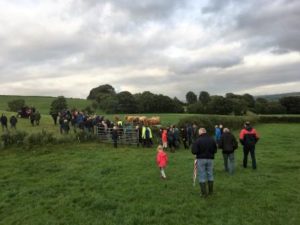