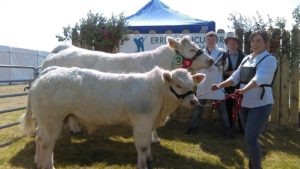 In the pedigree ring, Killawalla Caprice exhibited by Jarleth Mc Hugh from County Mayo landed the overall champion in a strong show of Charolais at Erris. The CF 52 daughter was shown accompanied by her November 2016 born bull calf by Oldstone Egbert. 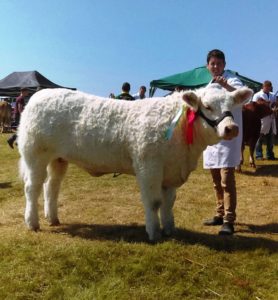 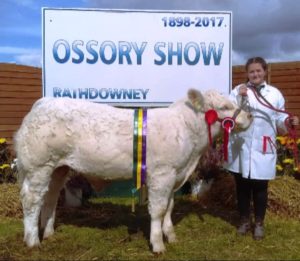 Champion Charolais in Ossory show, County Laois went to Goldstar Falkland and her bull calf by Texan gie from the Ryan family, Thurles, Co. Tipperary. The rising seven year old is a daughter of the french sire, Valseur. Falkland took over the championship reigns from her compatriots, Goldstar Haidi and Adorable who have been on winning form for the Ryan family already this year. Sheehills Majestic ET then rounded of a brilliant day for the Charolais breed and John Searson from Roscrea, Co. Tipperary, as he was awarded the interbreed calf championship. The September 2016 born bull calf who is a son of CF 52, had earlier won a powerful class of autumn born Charolais bulls in Ossory.