Charolais breeders from all parts of Ireland attended numerous summer shows over the bank holiday weekend, producing some wonderful display’s of Charolais cattle in many parts of the country. The first show of the weekend was Grange in County Sligo. Coming out on top here was Liscally Magic ET exhibited by Jon Regan from County Leitrim. This September 2016 born son of Balmyle Vagabond is enjoying a successful run on the show circuit in the north west this year. 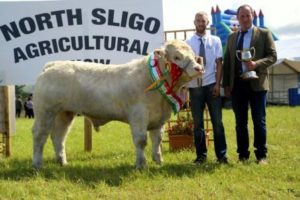 Standing reserve to the Leitrim bred bull was Ardabrone Molly ET exhibited by new breeder, Karl Kelly from County Sligo. Molly is an October 2016 born daughter of the Dovea AI sire, Inverlochy Ferdie. The attractive Ferdie daughter would continue her winning form over the course of the weekend, as she went on to take home the reserve Charolais championship in Bonniconlon show on Monday.

Pipping the fore mentioned Molly to the championship in Bonniconlon was the January 2017 born bull calf, Crossane 4 Napoleon. This much fancied son of Prime Roberto was exhibited by the Mc Govern family from Fivemilebourne, Co. Leitrim. The young bull had previously notched up red rosettes at Riverstown and Grange shows.

Not too far away in County Leitrim, Cloone show enjoyed a competitive show of Charolais cattle as always. Dalehill Macbeth from County Cavan breeder, Basil Kells was tapped out as overall Charolais champion by Judge, Drew Mc Murray. This October 2016 born bull is a son of the noted NCBC sire, Cavelands Fenian. In reserve was Gallaway Maverick exhibited by Michael Kiernan from Carrigallen, Co. Leitrim. The CF 52 son was following on from his success in Arva show the previous week, where he was awarded the reserve champion Charolais. 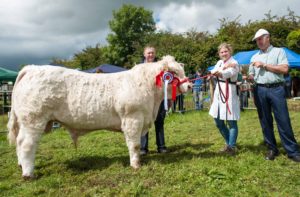 Meanwhile down South, Martin Ryan and family from Thurles, Co. Tipperary were flying the flag high for Charolais as they clinched the Charolais championship and overall Interbreed champion of the show in Tinahely. This time it was Goldstar Falkland who lead the way for the Goldstar herd, accompanied by her autumn born bull calf, Goldstar Magician. Standing reserve to Falkland in Tinahely was another member of the Goldstar team, Goldstar Maradona ET. This September 2016 born bull is a son of Texan gie and the prolific show cow, Goldstar Adorable. 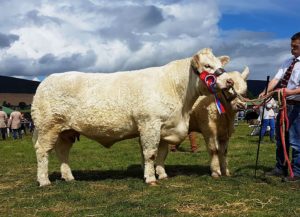