It has been a hectic couple of week’s on the show circuit with the National Charolais Show wrapped up for another year. The Donegal Charolais Club held their annual Calf Championships in Clonmany Show in County Donegal which produced a fantastic show of Charolais as always. Breeders flocked from all corners of Donegal to compete for the coveted title. Judge David Connolly found his Calf Champion and Overall Charolais Champion in the form of Roughan Madilin, exhibited by Pat Mc Clean from Newtowncunningham, Lifford, Co. Donegal. Madilin is an October 2016 born daughter of the home bred sire, Roughan Dix De Coe. 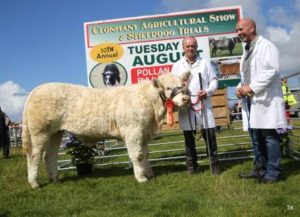 Standing reserve to the much fancied Madilin was Kilbline 1 Jolene ET exhibited by Patrick and Gerard Mc Laughlin from Malin, County Donegal. This January 2014 born daughter of Hutch was purchased at the Christmas Cracker show and sale in December 2016 from the Sugrue family in County Kilkenny. 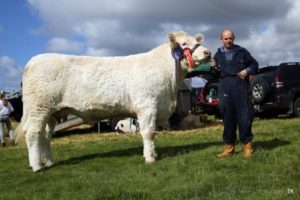 In Swinford Show in County Mayo, Ardabrone Molly ET continued her winning streak for breeder, Karl Kelly from County Sligo. The October 2016 born Molly who is a daughter of Inverlochy Ferdie has picked up rosettes at Bonniconlon and Grange shows already this Summer. 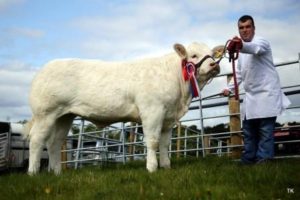 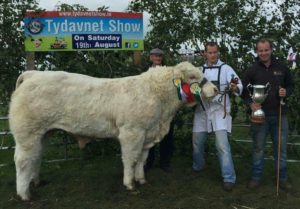 Championship honors in Tullow Show, County Carlow went to Martin Ryan and family from Thurles, Co. Tipperary. Doing the business for the Ryan family on this occasion was Goldstar Falkland accompanied by her October 2016 born bull calf, Goldstar Magician. The french bred Falkland was fresh after her outing to the National Charolais Show in Tullamore where she won her class. 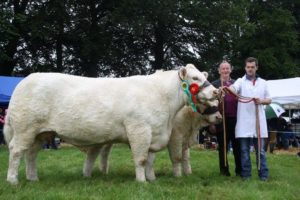 Cappamore Show in County Limerick always produces a top quality show of Charolais cattle and once again it did not disappoint. Taking the Overall Champion here was the October 2016 born Sheehills Majestic ET exhibited by John Searson from Roscrea, County Tipperary. Majestic was following on from his appearance at the National Charolais Show in Tullamore where he placed second in an exceptional class of Charolais bulls. In reserve was Michael Quin and family from Newmarket on Fergus, County Clare with their September 2016 born daughter of CF 52, Clenagh Mollie ET. 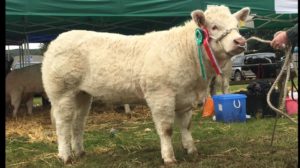