How do we measure progress, one of the answers definitely must be achieving our objectives. The recent evaluations released by ICBF show that the Charolais breed in Ireland are achieving rapid genetic improvements in their Replacement traits over the past number of years. The genetic trend graphs below also show that Charolais cattle in Ireland are driving ahead for traits such as ‘Carcass Weight’ and ‘Carcass Conformation’. To improve on Terminal traits, Replacement traits and at the same time produce easy calving cattle, is not such an easy task. It is for this reason that it is inspiring to see that the recent evaluations clearly show that the Charolais breed in Ireland is consistently improving on Calving Ease, Carcass Confirmation, Carcass Weight, Milk and Fertility, all at the same time. 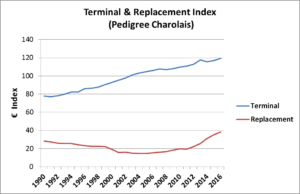 The genetic trend for the ‘Terminal Index’ in pedigree Charolais cattle in Graph 1 reflects the outstanding progress that Irish Charolais breeders have been making in breeding generations of Pedigree cattle that are far better for terminal traits than their predecessors. However, the remarkable improvements that must be noted from this graph is in the Replacement Index over recent years, in traits such as Milk and Fertility. 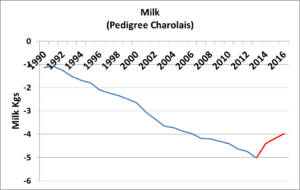 As can be seen in Graph 2, the ‘Milk Index’ in pedigree Charolais cattle has been improving gradually over the past few years. 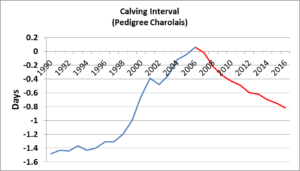 A lower figure is desired for ‘Calving Interval’, which according to Graph 3 indicates that fertility is consistently improving in the pedigree Charolais population. 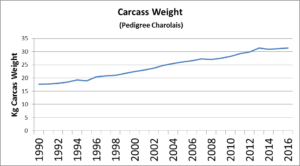 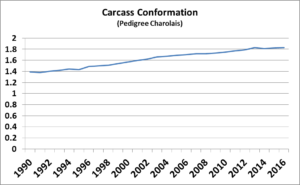 Graphs 4 and 5 clearly highlight the rapid gains made by Charolais breeders in Ireland with regards Carcass Weight and Carcass Confirmation. However, the key item to note from these improvements is the fact that they are being achieved in conjunction with Calving Ease. The Charolais breed average for Calving Difficulty continues to come down, reducing from 7.55% in 2014 to 7.15% at which it currently stands.