In what was described as one of the best show of Charolais bulls seen at the Christmas Cracker for some year’s, 63 bulls sold to an average of €4,580. Buyer’s were extremely selective in their choice of bulls, resulting in some meeting a wonderful trade and other’s finding it difficult to get moving. Leading the way at €10,000 and continuing an incredible run in the sales ring was Donegal breeder, Pat Mc Clean with Roughan Most. The Newtowncunningham man went on to sell his five bulls for a whopping average of €6,420. Most who is a September 2016 born son of Roughan Dix De Coe, stood second in his class in the pre-sale show. He carries a five star replacement index of €77, a five star terminal index of €136 and a calving figure of 7%. Securing this exceptionally well made bull was the O’ Kane brother’s from Carnlough, Co. Antrim after a lively bidding contest. 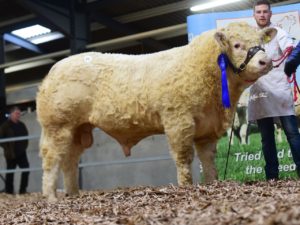 The sale got off to a flying start when the fourth bull into the ring, Kiltananlae Martin ET flew under the hammer at €9,100. This well muscled son of Enfield Plexus set the sale alight early on, attracting bids from every corner of the ring. Bred and exhibited by Noel Galvin from Birdhill, Co. Tipperary, the April 2016 born bull sold to Ian Brock from Garrison. 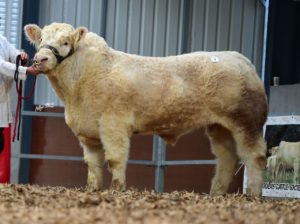 Kiltananlae Martin ET who sold for €9,100

Once again at €8,800 was Roughan Mask for Pat Mc Clean. This first prize winner is a son of the outstanding, Roughan Gibraltar, who has bred numerous high priced cattle in recent years. Mask who was born in October 2016, sold with a five star replacement index of €79, a five star terminal index of €137 and a calving figure of 6.8%. This bull headed northwards with Dungannon man, Brian Quinn. 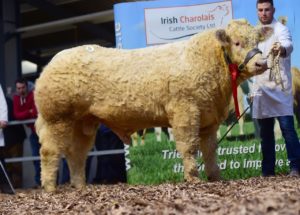 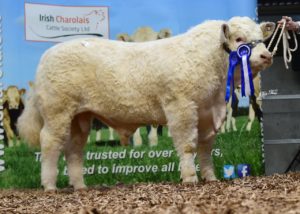 Bostonia Moses rounded of a great day in the show ring for the Enniscrone men, when he was tapped forward as the Reserve Junior Champion. The 14 month old Thrunton Bonjovi son failed to meet his reserve in the sales ring and was withdrawn unsold. 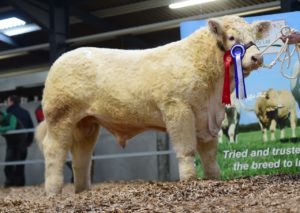 Sheehills Majestic ET exhibited by John Searson from Roscrea, Co. Tipperary then traded hands at €7,800. This 14 month old son of the UK sire, Inverlochy Ferdie, went up for auction with a string of rosettes under his belt from the summer show season. Snapping this second prize winner up was Claire Ferris from Millisle, County Antrim. 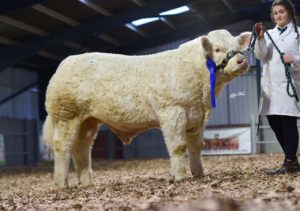 Sheehills Majestic ET who sold for €7,800

Catching the eye of Welsh Judge, Arwel Owen, was Clenagh Maserati. This huge, 17 month old son of Clonoulty Andraemon was awarded the Senior Champion of the show after fending of some outstanding opposition. Bred and exhibited by the Quin family from Newmarket-on-fergus, County Clare, Maserati carries a massive five star terminal index of €152. Securing the Senior Champion in the sales ring was Terence Mc Garrigle from Belleck, Co. Fermanagh at €7,700. 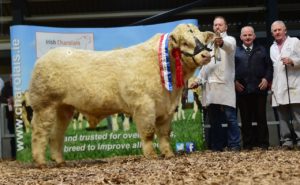 The Quin’s continued their prosperous run in the sales ring, when they sold Clenagh Mischief 2 ET at €7,500. A 14 month old son of CF 52, Mischief sold with a five star terminal index of €143 to the National Cattle Breeding Center, County Kildare. The Clenagh herd went on to sell their four offering’s for an average of €6,100. 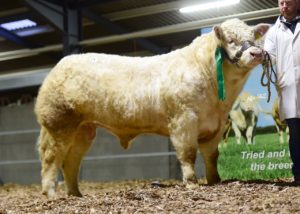 Derryolam Milliney exhibited by Niall Mc Nally from County Monaghan boasted one of the easiest calving figure’s in the catalogue at 4.1%. This Pirate son out of a Gin Tonic bred dam was just short of 13 months old. He romped his way to €7,100, selling to John Hurley from Castlerea, Co. Roscommon. 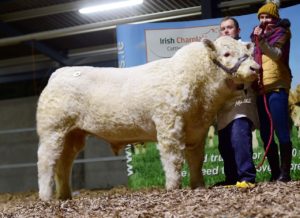 Cathal Duignan from Eslin, Co. Leitrim then sold Laheens Master at €7,000, a catchy son of the NCBC sire, Derryolam Impeccable. Once again, this bull was just short of 13 months old on the day. Buyer here was Nigel Matchett from Portadown, Co. Armagh. 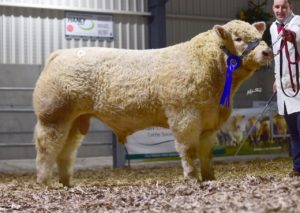 Also hitting the €7,000 mark was Noble Maher exhibited by Harry Noble from County Longford. This Pirate bred son, carried one of the best set of indexes in the catalogue, with a five star terminal index of €179, a five star replacement index of €102 and a calving figure of 8.6%. Wrapping up this second prize winner was Tony Kenny from Skreen more, Co. Sligo. 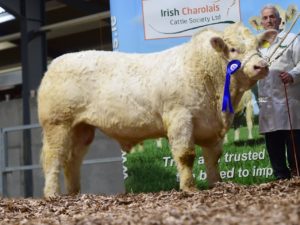 Tonroe Marshall kicked started the sale early on, when he received a call of €6,800. Exhibited by Vincent Callaghan from Swinford, Co. Mayo, this April 2016 born bull is a son of the home bred, Tonroe Eminem. He sold with an impressive set of indexes, comprising of a five star terminal index of €161, a five star replacement index of €92 and a calving figure of 6.2%. He also headed North with Peter Tiernan from County Down. 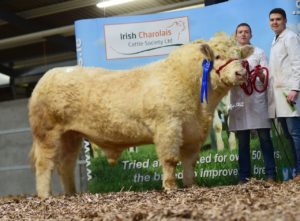 Local man, James Mulrennan from Elphin in County Roscommon then received €6,800 for Lisnanean Milo ET, a September 2016 born son of the French sire, Tombapik. This much fancied bull sold with an attractive set of indexes, which included a five star terminal index of €147, a five star replacement index of €84 and a calving figure of 7.7%. Buyers here were Dovea Genetics, County Tipperary. 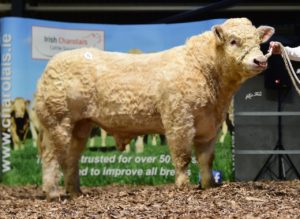 Hitting the €6,400 mark was Islandview Mario 2 for Tommy Mc Lauglin from Malin head in County Donegal. This Lisnagre Elite son, who was just short of 14 months old on the day of sale, carries a five star terminal index of €142, a five star replacement index of €108 and a calving figure of 7%. Mario sold to County Roscommon suckler farmer, Kitty Dolan.

Galway breeder, William Flynn from Newbridge sold one of the early lots into the ring at €6,200, in the form of Tullyvillage Miller. A son of the popular Fiston, this bull carries both Pirate and Indurain in his back pedigree. He also sold with a five star terminal index of €147, this one going Northwards with Claire Ferris from Millisle, Co. Antrim.

It wasn’t long before the Roughan herd and Pat Mc Clean were back in the action once again, when the first prize winner, Roughan Magic received a call of €6,200. This 15 month old bull is another son of the fore mentioned ,Roughan Dix De Coe. This bull sold to a suckler farmer from County Cavan. 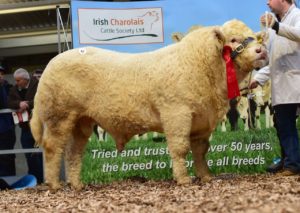 Judge, Arwel Owen awarded the Junior Champion of the show to Garracloon Mighty Mac, exhibited by Aidan Mc Hale from Ballina, County Mayo. This October 2016 born bull who is a son of Lyonsdemesne Tzar, carries both Jupiter and CF 52 on his dam’s side. He was knocked down at €5,800 to Michael Mc Kenna from Maghera, County Derry. 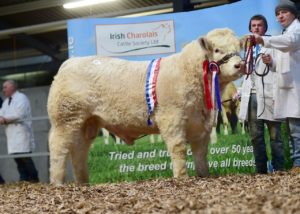 The Noble’s from County Longford where back in the business end of things once again when they traded, Noble Messi at €5,500. This September 2016 born son of the Dovea AI sire, Crossmolina Euro sold with a five star terminal index of €163 to Christopher Connon, Gordon, Scotland.

County Mayo breeder, Alan Wood clinched the last class of the day with Crossmolina Maxwell ET, a 12 month old bull sired by Harestone Hercules. This impressive calf is a son of the herd’s prolific CF 52 daughter, Crossmolina Bertie. Maxwell found his new home with Mark Gillespie from Killyleagh, Co. Down for a sum of €5,400. 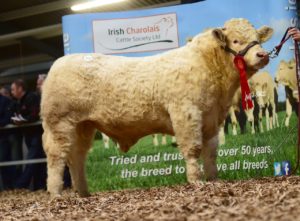 Crossmolina Maxwell ET who sold for €5,400

The next Society show & sale will take place on the 17th of February 2018 in Tullamore Mart, Co. Offaly.