The first Society Show and Sale of 2018 took place in Tullamore Mart on Saturday last. Despite the large number of bulls cataloged and the harsh weather conditions we are after experiencing, trade for bulls was buoyant right throughout the day. The atmosphere around the yard from early morning was a clear reflection of the demand for Charolais cattle in the commercial marketplace. As the sale got underway, it was clear from the outset that customers were willing to pay a premium price for quality bulls carrying high indexes. Overall 72% of the Bulls on offer sold to average just over €3,750. 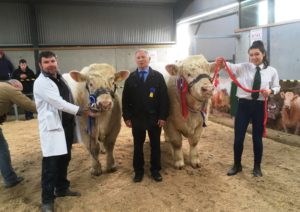 The highlight of the day came in the form of the Champion bull, Kilvilcorris Mark, who sold for the top price of €9,000. This 17 month old son of Goldstar Echo caught the eye of Judge, David Erskine from the moment he entered the ring. Bred and exhibited by Matt and PJ Ryan from Thurles, Co. Tipperary, this bull sold with a five star terminal index of €159 and a calving figure of 7.9%. After some lively bidding, the Champion bull was eventually knocked down to Marcella Phelan from Portlaoise. 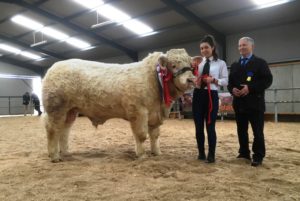 The Reserve Championship was awarded to Islandview Mr T, exhibited by Tommy Mc Laughlin from Lifford, Co. Donegal. This 16 month old Bull went on to sell for the day’s second highest price of €6,400. A son of the Dovea AI sire, Tombapik, Mr T possessed a wonderful set of indexes, which consisted of a five star terminal index of €138, a five star replacement index of €94 and a calving figure of 8.7%. Snapping this one up was David Argue from Drung in County Cavan. 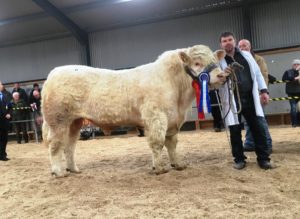 Next best at €6,300 was Lisnagre My Boy ET from Jim Geoghegan, Streamstown, Mullingar, Co. Westmeath. This son of Jupiter and Lisnagre Ivan 2 ET, who goes back to the prolific Ballydownan Simone, was wrapped up by Shane Hunt from Ballaghaderreen, Co. Roscommon. The Geoghegan family would go on to sell My Boy’s stablemate, Lisnagre My Dock for €4,700. This 17 month old son of Cavelands Fenian sold to County Wicklow suckler farmer, David Johnson.

The Feeney brother’s from Enniscrone, Co. Sligo traded their two bulls at €6,000 and €4,400 respectively. The first bull up for the men from the West was Bostonia Meryl 2 at €6,000, a first prize winner from the pre-sale show. This July 2016 born son of Thrunton Bonjovi displayed an attractive set of indexes, which included a five star terminal index of €171, a five star replacement index of €88 and a calving figure of 7.6%. His herd mate, Bostonia Meryl exchanged hands at €4,400 to a buyer from Northern Ireland. Another July 2016 born bull, this time a son of the French sire, D-Angely R. This bull carried one of the lowest calving figures in the catalogue at 4.1%.

Also hitting the €6,000 mark was Fermoyle Myles for William Scanlon from Westport, Co. Mayo. A son of the popular NCBC sire, Fiston, Myles sold with one of the best array of indexes in the catalogue. He carried a five star terminal index of €167, a five star replacement index of €115 and a calving figure of 6.5%. A second prize winner in the pre-sale show, this well muscled bull was knocked down to William Keane from County Wicklow. It wasn’t long before the popular Fiston was back in the limelight, when another son of his, Ballyfinnane Malachy traded at €5,500. Exhibited by Kenneth Clarke from Ardnacrusha, Co. Clare, this bull also showed a decorative set of indexes, with five stars down the catalogue and a calving figure of 7.4%.

Two bulls then shared the same price tag of €5,000. The first of which was the 13 month old, Rattigan Niall ET exhibited by David Rattigan from Elphin, Co. Roscommon. A son of the high performance sire, Blelack Digger, Niall offered the highest terminal index in the catalogue of €186 and a calving figure of 8%. Purchasing this young bull was John O’ Sullivan from Crettyard, Co. Laois. The second bull at €5,000 was the 13 month old, Aghafad Nevers ET exhibited by County Monaghan breeder, Edward Walsh. A son of the fore mentioned Goldstar Echo, this young bull stood top of the line in the last class of the day and will now take residence with Seamus O’ Loughlin from Rathangan, Co. Kildare.

€4,600 for Ballym Malteser sired by Lisnagre Elite and exhibited by Louise Quinn from County Offaly

€4,600 for Mearain Marcus sired by Cavelands Fenian and exhibited by Christopher Marron from County Monaghan

€4,600 for Premier Mascot sired by Fiston and exhibited by Kevin Whelan from County Laois

€4,200 for Kilvilcorris Montgomery sired by Goldstar Echo and exhibited by Matt Ryan from County Tipperary

€4,150 for Cloonshanna Messi sired by Mogador and exhibited by Thomas Mc Gowan from County Roscommon

€4,000 for Longstone Mark 2 sired by Pirate and exhibited by John Mc Weeney from County Leitrim

€4,000 for Cloughbrack Magoo sired by Alwent Goldbar and exhibited by Mattie Kelly from County Galway

€4,000 for Callo Mal ET sired by Pirate and exhibited by Eugene Hand from County Westmeath

The next Society Show and Sale is the Premier, which will take place in Elphin Mart, Co. Roscommon on Saturday the 24th of March 2018