Charolais bulls met a solid trade in Tullamore on Saturday last, with 68% of the bulls on offer selling to an average of €3,581. Despite the rare sight of beautiful sunshine, buyer’s traveled from all corners of the Country to source a Charolais bull. Once again, buyers were willing to go the extra mile to secure quality bulls with high indexes and low calving figures. Topping the trade at €7,200 was the Overall Champion, Cloughbrack Matthew exhibited by Mattie Kelly from Newbridge, Co. Galway. A son of Vosgien Vf and a Grimaldi bred dam, this 18 month old bull carries a five star terminal index of €141 and a calving figure of 7.4%. Securing the Champion was County Galway suckler farmer, Maeve O’ Higgins. 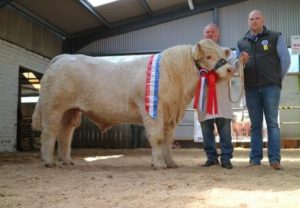 Judge for the day was Stuart Wilson, Farm Manager at the Coolnaslee herd in Northern Ireland. Stuart selected the 15 month old, Forestview Nugget as his Reserve Champion. Exhibited by Sean Mc Loughlin from Carrick-on-Shannon in County Leitrim, Nugget went on to sell for the day’s second highest price of €7,000 to a Northern Ireland suckler farmer. Sired by the legendary CF 52, this classy young bull boasted a five star terminal index of €151 and a calving figure of 8.6%. 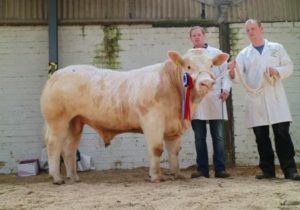 It was a tremendous day in the sales ring for County Mayo breeder, Martin Calvey from Westport. Martin parted ways with his two bulls for €6,600 and €5,000, respectively. Two full embryo brothers, Caltun Mighty ET and Caltun Mossy ET set the sale alight as they attracted bids from every corner of the ring. First into the ring was Caltun Mighty ET, who received the call of €6,600 from a County Tyrone suckler farmer. Mossy followed directly after, selling for €5,000 to Pat Cox from County Roscommon. Sons of the popular Pirate and a CF 52 bred dam, both bulls carried a five star terminal of €154 and a calving figure of 7.2%. 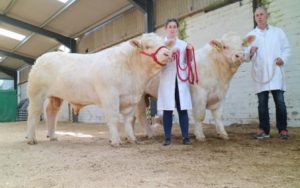 Jim Geoghegan from Streamstown, Mullingar, Co. Westmeath also excelled in the sales ring, selling his two offerings for €5,500 and €5,100. First up at €5,100 was Lisnagre Monty ET, a September 2016 born son of Jupiter. Monty will now take up residence with Michael Burke from Thurles, Co. Tipperary. His stablemate, Lisnagre Noel ET, then traded hands at €5,500. This 15 month old son of Major was snapped up by James Newell from County Antrim.

Next best at €4,800 was Kilvilcorris Mansell exhibited by Matt and PJ Ryan from Thurles, Co. Tipperary. This Pirate son out of a Prime Roberto bred dam, displayed a decorative set of indexes, comprising of a five star terminal index of €158, a five star replacement index of €71 and a calving figure of 5.9%. Wrapping this one up was Deirdre Grace from the Curragh, Co. Kildare. The Ryan’s also traded Kilvilcorris Nelson at €4,300. Once again this 13 month old bull is a son of Pirate, this time out of a CF 52 bred dam.

Dreena Marty then hit €4,700 for County Kerry breeder, Pat O’ Hara. A son of the well known NCBC sire, Fiston and a Blelack Digger bred dam, Marty displayed one of the best set of indexes in the Catalogue. He carries a five star replacement index of €111, a five star terminal index of €151 and a calving figure of 6.2%. Securing this November 2016 born sire was Gerard Donnelly from Ennis, Co. Clare.

€3,900 for Noble Michael by Goldstar Echo, exhibited by Harry Noble from County Longford

€3,800 for Williamstown Moate by CF 52, exhibited by Aidan Farrell from County Westmeath

€3,500 for Tullyvillage Nathan by Fiston, exhibited by William Flynn from County Galway

€3,500 for Baurnafea Manvin by Utrillo Mic, exhibited by John Bambrick from County Kilkenny

The next Society Show & Sale takes place in Tuam Mart, Co. Galway on Saturday the 5th May 2018, with 50 Charolais bulls cataloged.