The ready trade experienced for Charolais bulls this spring continued at Saturday’s show and sale in Tuam Mart. Once again suckler farmers were out in force to secure a Charolais bull for the upcoming breeding season, resulting in 71% of the bulls on offer selling to an average €3,261. Leading the way at €5,100 was the classy, Garracloon Notorious exhibited by Aidan Mc Hale from Ballina, Co. Mayo. A son of Thrunton Bonjovi and a Major bred dam, this bull carries a 5 star terminal index of €128 and a calving figure of 7.8%. At just over 14 months old, the stylish Notorious attracted some lively bidding before being knocked down to Peter Carney from Claremorris, Co. Mayo. 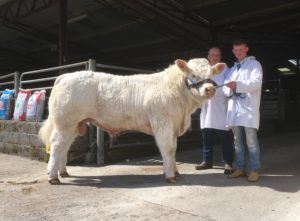 Garracloon Notorious who sold for the top price of €5,100

Judge, Paddy Farrelly from the Dromiskin herd based in County Louth awarded the Overall Champion to Camber Macy ET, exhibited by Vincent Mc Brien from County Leitrim. A son of CF 52 and a Lyonsdemesne Tzar bred dam, this 17 month old bull went under the hammer at €3,000. In reserve was Rattigan Noah ET, 15 month old son of Oldstone Egbert, exhibited by David Rattigan from County Roscommon. This bull failed to meet his reserve in the sales ring. 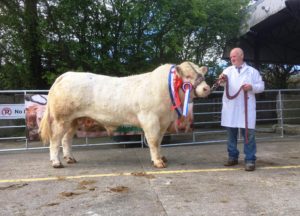 County Longford breeder, Noel Mc Goldrick was next best in the sales ring, as he received a call of €3,700 for his 14 month old bull, Cloonohill Notorious. Sired by Goldstar Echo, this young bull carries some of the breed’s old favorites in his pedigree, in Oldstone Egbert and Domino. He sold with a five star terminal index of €139 and a calving figure of 8.4% to Michael Grogan from County Clare.

Jim Geoghegan from Streamstown in County Westmeath realized €3,550 and €3,500 for his two offerings, Lisnagre Nevin and Lisnagre Michael ET. At €3,550 was Lisnagre Nevin, a 14 month old son of Cloverfield Excellent and a Pirate bred dam. This bull sold with the highest terminal index in the catalogue at €180 and a five star replacement index of €74. Snapping this one up was Peter Gallagher from Ballyhaunis, Co. Mayo. His herd mate, Lisnagre Michael ET who traded at €3,500 is a son of Prime Roberto and a Major bred dam. Securing this September 2016 born bull was Patrick Sweeney from Caltra, Co. Galway.

Joe Clancy from Oughterard, Co. Galway realized €3,400 for his December 2016 born, Western Muscle Maker. A son of Major and a Meillard Rj bred dam, Muscle Maker carries a five star terminal index of €136 and a calving figure of 6.8%. Once again, it was a local suckler farmer who was the successful bidder.

€3,200 for Caltun Montanna by Fiston, exhibited by Martin Calvey from County Mayo

€3,200 for Rattigan Nani by Thrunton Bonjovi, exhibited by David Rattigan from County Roscommon

€3,050 for Perennial Nutcracker by Meillard Rj, exhibited by Nicholas Byrne from County Galway

€3,000 for Tullyvillage Nailer by Cavelands Fenian, exhibited by William Flynn from County Galway

The next Society Show and Sale takes place in Tullamore Mart, Co. Offaly on Saturday the 26th May 2018