This year the Irish Charolais Cattle Society nominated Mr. Benny Keating of the Prime Herd for the National Hall of Fame Award. Benny is a native of Nicholastown Grange, Clonmel, Co. Kilkenny. Growing up, his family’s bible was the Irish Field, from which he noticed the dams of many of the chasing winners were by a horse called, King Hal. He joined the National Bank after Secondary School, at the time he was delighted to get away from farming, as the trams of hay to be saved seemed endless. The favorite sport at the time in his area was Gaelic Football. He played for Tullow GAA club in 1959, who won the Carlow Senior Football Championship for the first time. He also played with Carlow Senior Footballers in the Leinster Championship that year and subsequently with Tipperary, alongside his two older brothers, John and Dick. He purchased 60 acres in 1969 at College Hill, Templemore. It was around this time, his Father went to Goff’s’ sales to purchase a King Hal mare for not more than £200. Her first and only progeny was sold for £3000 as a 3 year old stallion; incidentally he would go on to win the Irish Grand National, trained by Mouse Morris, the horse was called Billycan. 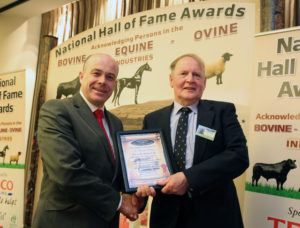 In 1974, Benny bought an in-calf Charolais heifer at the first sale of imported Charolais females to Ireland, from the proceeds of Billycan at £2000. Noted breeders at the time were Mrs Gardiner, Lord Iveagh in person were opposing bidders. The dream turned into a nightmare when the heifer had to have a Caesarean. The calf, a heifer was lost and the mother would not go back in calf. As the breed got more plentiful, he purchased 3 or 4 pedigree weanling heifers each year and put them in calf, selling them in calf as 3 year old’s. After keeping what he thought at the time was the best one, the purchasers of the other females which at the time were reasonably local, would invite him to see their calves after calving. He noticed the bigger plainer heifers calves were inferior to the more feminine, well balanced and medium sized heifers. Among the purchasers at the time were John Ryan from Drom (Father of PJ and Matt) and John Bambrick, who are now some of the best Charolais breeders in Ireland.

In 1997 he adopted the practice he had used with the King Hal mare, looking at the quality of the produce first and thereafter the appearance of the female for femininity, good head, feet and locomotion. He purchased a pregnancy from the well-known and respected breeder, Jim Ryall of the Knockane Herd. The dam was Knockane Cynthia and the sire was Jupiter. Cynthia had won 58 Championships including many National and Interbreed Championships. Her progeny had also excelled in the show ring.The calf was a heifer, which he called Prime Noelle. Prime Noelle went unbeaten in the show ring in 1999, including the Overall Heifer Champion at the National Charolais Show. She would also go on to capture the Supreme Charolais and Interbreed Champion at Tullamore National Livestock Show.

Benny retired as Manager of Bank of Ireland, Templemore in 1990. This gave him more time for the promotion of the Charolais breed. Now 44 years after purchasing his first Charolais female, the Charolais Society is proud to nominate him for the 2018 National Hall of Fame Award. Benny is deeply appreciative and thankful to the Charolais Council for nominating him for this prestigious award.