Despite a tough Winter and a sluggish trade experienced across all breeds this Spring, Charolais Society sales have enjoyed a lively trade right throughout. Saturday’s sale in Tullamore was the last of our Spring sales, in which bulls were a tremendous trade. The fact that many of the 125 bulls cataloged were sold privately prior to sale, greatly helped boost the trade for those that were present. Overall 85% of the bulls on offer sold to an average of €3,227. Topping the trade at €6,200 and stealing the limelight was the Junior Champion, Clenagh Noble 2, exhibited by the Quin family from Newmarket-On-Fergus, Co. Clare. This eye catching son of Goldstar Echo and a CF 52 bred dam, sold with one of the most decorative set of indexes in the Catalogue, with a replacement index of €88, a massive terminal index of €192 and a calving figure of 7.8%. Just 14 months old, this hotly sought after young bull was snapped up by Gareth Dunne from Belturbet in County Cavan. 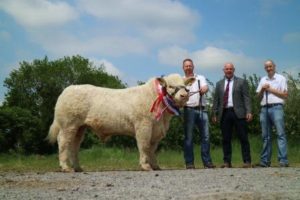 Not far behind at €5,800 was the Reserve Junior Champion, Cloughbrack Nelson, exhibited by Mattie Kelly from Newbridge, Ballinasloe, Co. Galway.  A son of Voimo and a Prime Roberto bred dam, this 13 month old bull attracted some brisk bidding, before being knocked down to Thomas Burke from County Galway. He carries a five star replacement index of €83 and a calving figure of just 5.9%. 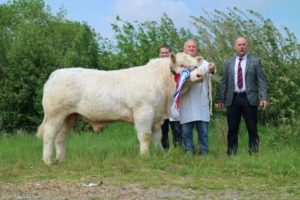 Next best in the sales ring at €5,600 was the second prize winner, Aheybridge Nathy, exhibited by Michael Sexton from Mullagh, Ennis, Co. Clare. A son of the popular Pirate and a Glenville Victor bred dam, Nathy sold with a five star terminal index of €147 and a calving figure of just 5.4%. Wrapping up this quality, January 2017 born bull was suckler farmer, Shaun Corcoran from Ballybrit, Co. Galway.

Two bulls then shared the price tag of €4,600. First up was Ballydavis News ET, exhibited by Michael and Kathleen Hargroves from Portlaoise, Co. Laois. This 14 month old bull stood top of the line in his class, under Judge, Sean Mc Govern from Northern Ireland. The Ballydavis bull enjoyed an eventful show career in 2017, picking up the Reserve Junior Champion at the National Charolais Show. A son of Bova Sylvain and a Indurain bred dam, stars were not in abundance, but quality shone through, with Patrick Thomas from County Waterford securing this one after some strong bidding. Galway breeder, Mattie Kelly was back in action when his young 12 month old bull, Cloughbrack Nathan went under the hammer at €4,600. Despite being the last bull into the ring, Nathan witnessed bids coming from numerous directions, with Jim Burke from County Roscommon winning out.  A son of Vosgien Vf and a Pinay bred dam, this bull carries a five star replacement index of €114, a five star terminal index of €146 and calving figure of just 4.8%. It was evident throughout the sale that Calving indexes were being focused on by farmers.

In the pre-sale show, Judge Sean Mc Govern selected Dalehill Noel exhibited by Basil Kells from County Cavan as his Senior Champion. A son of Prime Roberto and a CF 52 bred dam, this January 2017 born bull sold with a boastful five star terminal index of €157 and a below average calving figure of 7.1%. Noel was one of the few bulls to head North on the day, selling for €4,100 to Walter Hogg from County Tyrone. 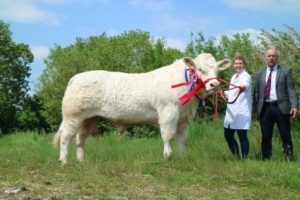 The Reserve Senior Champion was awarded to Kilbline 1 Manager ET exhibited by the Sugrue family from County Kilkenny. This huge son of Utrillo Mic and a Domino bred dam, received a call of €3,000 from Robert Clarke, Roscrea, County Tipperary. The Kilkenny bred bull carries a five star terminal index of €166 and an above average calving figure of 11.3%. 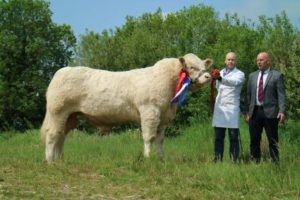 At €4,100 was the 17 month old Dreena Marti exhibited by Pat O’ Hara from Ballyheigue, Co. Kerry. This Thrunton Nostradamus son carries some reliable sires on his dam’s side, in Goldstar Echo and CF 51. As well as possessing a five star terminal index of €152, Marti also carries an above average calving figure of 8.4%. Not far behind at €4,050 was Carrowkeel08 Nick 2 exhibited by Tommy Gormley from Elphin, County Roscommon. This 13 month old son of Goldstar Echo displayed a full page of stars, carrying a five star terminal index of €128, a five star replacement index of €100 and a calving figure of 7.3%. Successful bidder on this one was Portlaoise suckler farmer, John Ryan.

County Longford breeders, Tom and Karl Farrell parted company with their 13 month old bull, Cornadrung Noah for €3,900. A son of the widely used NCBC sire, Fiston, Noah went to sale with a productive show season under his belt, after picking up a red rosette at the 2017 National Charolais Show. Securing this high terminal index young bull was Eamon Duffy from Kells, Co. Meath. Once again this bull sold with below average calving figure of 6.1%. Two bulls would exchange hands at €3,800, the first being Williamstown Michael ET sired by Texan gie. Exhibited by Aidan Farrell from Moate, Co. Westmeath, this September 2016 born bull was scarce on indexes, but caught the eye of Judge, Sean Mc Govern to pick up a red rosette in the first class of the day. Also hitting the €3,800 mark was Cavelands Mico exhibited by Sean Waldron from Ballyhaunis, Co. Mayo. This time indexes were in abundance, as Mico displayed a five star terminal index of €147, a five star replacement index of €108 and a calving figure of just 6.8%. Once again it is the popular NCBC bull, Fiston who is the sire.

The Quin family from Newmarket-On-Fergus, County Clare would go on to enjoy more success, as they traded Clenagh Nevada by Texan gie for €3,700. A 14 month old bull, Nevada sold with a five star terminal index of €135 and a calving figure of 7.1%. Three bulls then went under the hammer at €3,600. First up was Kilvilcorris Mann exhibited by Matt and PJ Ryan from Thurles, Co. Tipperary. Sired by Prime Roberto and out of a Pirate bred dam, this high index young bull picked up a second prize rosette in the pre-sale show. Snapping Mann up was a County Meath suckler farmer. David Erskine also received a call of €3,600 for his 15 month old bull, Fieldview Nike sired by Enfield Plexus. Another first prize winner from the pre-sale show, Nike struggled on indexes, but attracted a lot of positive attention in the sales ring, eventually being knocked down to Pat Feeney from County Sligo. Cavehill Napoleon from Padraig Farrell was the third bull to attract a bid of €3,600. This stylish son of CF 52 and a Pirate bred dam, carries a five star terminal index of €143 and a calving figure of €143. Laying on the final bid here was Pat Hanley from County Roscommon.

€3,200 for Dereskit Navigator 2 sired by Commandeur, exhibited by Basil Bothwell from County Cavan