Rosanna Jupiter was purchased by David and Louise Barker of the Caylers Charolais herd in Nuthampstead, Hertfordshire in 2015. Bred by Pat Stephens from Tullow in County Carlow, Jupiter is certainly starting to make a name for himself across the water. Commenting on Jupiter, David Barker says “he has proved to be a successful sire for us and recent successes with his progeny include the Reserve Intermediate Champion at Carlisle with Caylers Magnate, who  sold for 5000gns and Caylers Minstrel, the second top price bull at Welshpool, selling for 5800gns. We have also recently sold another son of Jupiter in a joint purchase to three pedigree herds in Scotland.” Jupiter who is a son of Rosanna Fameux and Rosanna Daisybell, carries an impressive calving index of +6. Commenting on Jupiter, Pat Stephens is “delighted to see him breeding so well for the Barker family, it’s so important to me that my Cattle perform well for my customers.” 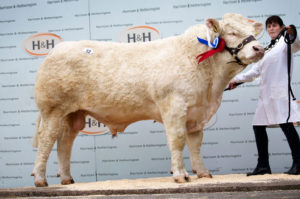 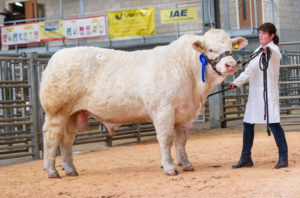