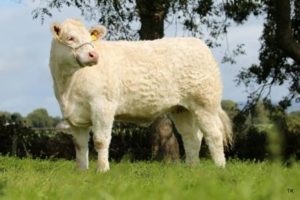 At this year’s National Ploughing Championships, the Irish Charolais Cattle Society held a raffle for the in-calf pedigree Charolais Heifer, Clenagh Majesty. The well bred Goldstar Echo daughter attracted enormous interest all week from the public. On Friday afternoon it was announced that William Anderson from Ballyshannon in County Donegal was the lucky winner. William is a young man with a keen interest in farming and we would like to wish him the very best of luck with his new Heifer. Ticket sales over the course of the week amounted to €10,150, which will all be donated to the Irish Motor Neurone Disease Association. The Irish Charolais Cattle Society are delighted to be part of such a wonderful initiative and would like to express their gratitude to the breeders of Clenagh Majesty, the Quin family from County Clare for all their hard work.