Nicole Mc Padden from Rhode, Tullmaore, Co. Offaly has been selected as the winner of this year’s ICCS Marketing Competition. The Competition involved a project in which candidates from the age of 16 – 24 years old, envisaged themselves as the Marketing Manager of the Irish Charolais Cattle Society and described how they would promote the Charolais breed in Ireland. There was some outstanding entries from young people all over Ireland, which left the task of judging them extremely difficult. Nicole will now win an Elite Pedigree Registered Charolais Heifer, purchased by the Irish Charolais Cattle Society at their Elite Heifer Show and Sale on November 10th in Tullamore Mart. 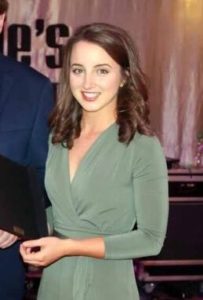 Nicole who is 22 years old, described how she would set up a Charolais Beef Program, similar to the Teagasc Better Farm Beef Program that would enable farmers from all over Ireland to see what is achievable by incorporating Charolais genetics in their herd. It would involve six Beef farmers from across Ireland, with different systems of farming, for example, calf to beef, weanling to beef etc. For taking part in the Program, each farmer would receive a financial contribution from the ICCS towards the purchase of a pedigree Charolais bull at any of their Society sales. These farmers would have the free advise and guidance of a nutritionist from a meal company in order to achieve the maximum performance from their Cattle. The farmers would also be guaranteed a pre-negotiated price for their Beef, agreed with a certain Meat factory.

The performance data of the Cattle on these farms could then be used for the promotion of the Charolais breed. Birth weights, weaning weights and carcass weights would all be collected to identify certain genetics and traits within the Charolais breed. These farms could also be used as demonstration farms, where farm walks could be held to highlight what the Charolais breed can do as both a Terminal and Maternal sire. Nicole explained the benefits of Social Media for getting information and results from these farms out to the general public. She also highlighted the importance of involving young people and touched on the idea of teaming up with a University in carrying out Research on these farms.

The Society would like to congratulate Nicole on her wonderful project and thank all those who sent in an entry, some brilliant ideas were received. Everyone who entered will receive a Meal Voucher, kindly sponsored by Greenvale Animal Feeds. A big thank you must go to them also.