This year’s Christmas Cracker was anticipated by many as one of the sales of the year, with a fantastic trade for Charolais Cross Cattle in the commercial market this Autumn. Charolais weanling’s have consistently achieved premium prices in Marts throughout the Country and continue to do so. It must be said that the sale did produce a lively trade, with 74% of the bulls on offer selling to an average of €4,216. A strong demand for quality, commercial type bulls was evident, with a number of bulls selling privately since Saturday’s sale. Topping the trade at €10,000 was two Roughan bred bulls exhibited by Pat Mc Clean from County Donegal. The first to go through the sales ring was Roughan Noah 2 who is a son of Roughan Gibraltar, a bull who has bred numerous high priced cattle in recent years and a Roughan Echo bred dam. He sold with a four star terminal index of €127, a four star replacement index of €63 and a below average calving figure of 6.5%. After some vibrant bidding, Noah was eventually knocked down to Adrian and Bernard Fallon from Attymon, Co. Galway. Pat’s second bull to hit the €10,000 mark was the second last bull into the ring, Roughan Nixon. Despite attracting bids from a number of overseas customers in the sales ring, he was withdrawn from the ring unsold and was later sold through the mart to fellow Donegal breeder, Charles Harkin. Nixon is another son of Gibraltar and carries a five star terminal index of €141, a five star replacement index of €78 and a calving figure of 6.1%. 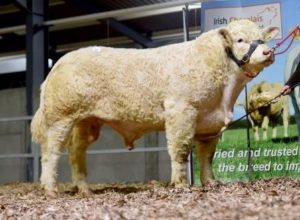 Securing the joint second highest price of €8,500 was the Overall Junior Champion, Fieldview Nathaniel exhibited by David Erskine from Crosses, Co. Monaghan. This powerful October 2017 born bull fought of stiff competition in the Junior section under Judge, Kevin Thomas of the Moelfre herd in West Wales. Sired by the €20,000 Ashleigh Admiral, Nathaniel is a son of Fieldview Crystal, described as the herds top breeding cow. Cataloged with a five star terminal index of €169, the Junior Champion was snapped up in the sales ring by Andrew Ferguson from County Tyrone. 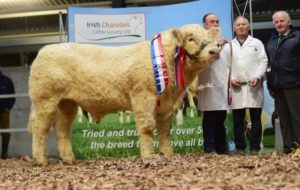 Sharing the same price tag of €8,500 was Cloonglasna11 Noddy ET exhibited by the Egan brothers from Ballina, Co. Mayo. This well made young bull has been a regular winner on the show circuit all year, claiming red rosettes on numerous outings, including the National Charolais Show in Tullamore. A son of Major and a Domino bred dam, Noddy carries a 4 star terminal index of €125. Having picked up a second place rosette in the pre-sale show, Noddy was acquired in the sales ring by Noel Mc Ilwaine from Plumbridge in County Tyrone. 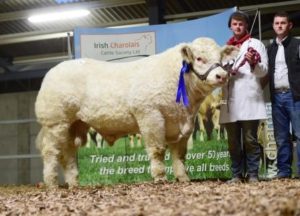 Three bulls then exchanged hands at €7,100. The first to go under the hammer was the Overall Senior Champion, Ballynabreen Nevin exhibited by John Mc Dermott from Gleneely, Co. Donegal. This well balanced bull caught the eye of Judge, Kevin Thomas from the moment he entered the ring. Sired by Goldstar Echo, Nevin carries some of the breed’s most prolific sires in his mother’s pedigree, including, Prime Roberto and CF 52. He went for auction with a five star terminal index of €152 and a below average calving figure of 6.9%. Having the final call on the Champion was Stanley Clarke from Ballinasloe, Co. Galway. 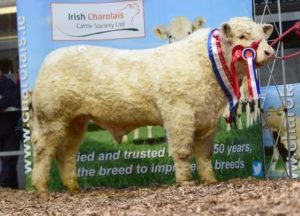 Also trading at €7,100 was the last bull into the sales ring, Roughan Nial 2 exhibited by Pat Mc Clean from County Donegal. Another son of the fore mentioned, Roughan Gibraltar, this time the dam is a daughter of Roughan Verygood. A number of customers waited until the end of the day in hope of securing this first prize winner from the pre-sale show. The Donegal bull who was cataloged with a five star terminal of €132, a five star replacement index of €85 and  a calving figure of 6.2%, was finally tied up by Cormac Mc Breen from Shercock in County Cavan. This rounded of a wonderful day’s trading for the Roughan herd, selling three bulls for a total sum of €27,100. 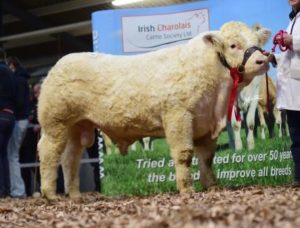 Liam Mitchell and family from Muckanagh in County Leitrim had a day to remember on Saturday, selling their two November 2017 born bulls for €7,100 and €4,200, respectively. Liam is continuing on the Charolais breeding tradition began by his late father Pete in the 1980’s. Both their bulls, Muckanagh Navigator and Nimble were sired by the Dovea AI sire, Carrickbrack Hutch and carried two of the most decorated sets of indexes in the Catalogue. Nimble received a call of €7,100 from James Newell in Ballymoney, while Navigator went to the midlands with Fancis Pyrrela from County Westmeath. 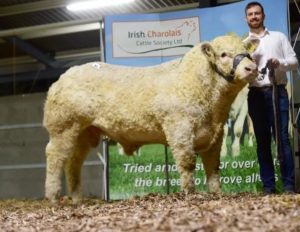 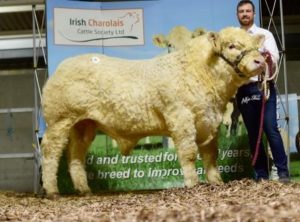 Muckanagh Navigator who sold for €4,200

Selling at €7,000 was Tonroe New, exhibited by the Callaghan brothers from Swinford in County Mayo. Having been withdrawn from the sales ring unsold, this attractive son of CF 52 exchanged hands outside the ring, and will now travel across the water to Scotland with Martin Barr from Crocketford. 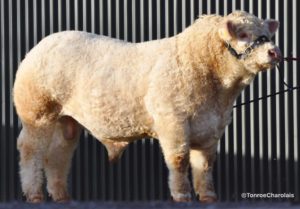 At €6,800 was the Reserve Junior Champion, Goldstar Nobility exhibited by Martin Ryan and family from Thurles in County Tipperary. This classy son of Virtuose and the Goldstar Echo bred dam, Indira, goes back to the Major/Merville daughter, Goldstar Florence. Nobility was purchased by James Fahy in County Galway, a repeat customer of the Ryan’s. 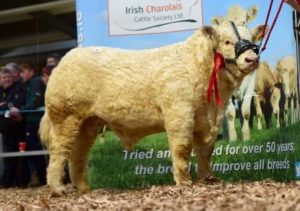 The Carey’s from Killucan in County Westmeath had a successful day in the sales ring, sellng their two bulls for €6,100 and €3,900, respectively. At €6,100 was Sionhill Nick, a September 2017 born son of Fury Action and a Bova Sylvain bred dam. Having picked up a second place rosette in the pre-sale show, Nick went under Tom Cox’s hammer selling to Martin Barr from Scotland. Hitting €3,900 for the Carey’s was Sionhill Niall, an October 2017 born son of CF 52. This bull sold to local suckler farmer, Tom Daly from County Roscommon. 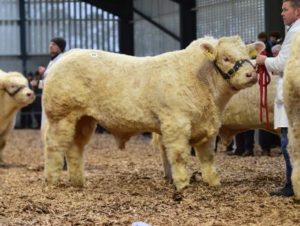 Michael Kiernan from Carrigallen in County Leitrim parted company with his 13 month old bull, Gallaway Nice Boy 2 ET at €6,000. One of the pre-sale favorites having picked up numerous accolades at summer shows all year, Nice Boy was placed third in a strong class of Junior bulls before going on to sell to Matt Workman from Kilwaghter in County Antrim. This high terminal index young bull is a son of CF 52 and Bova Sylvain bred dam. 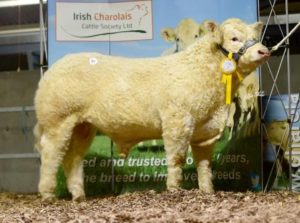 Trading at €5,100 was Cuillmore Ned exhibited by Thomas Keane from Westport in County Mayo. This well muscled son of Dromiskin Viceroy and a Enfield Plexus bred dam, was born in September 2017 and carries a five star terminal index of €131. Ned will now join suckler farmer Edward Greene from Dangan in County Galway.

Three bulls then followed at €5,000. The first two to hit the €5,000 mark was Ballynabreen Norman and Ballynabreen Neveers, both exhibited by John Mc Dermott from Gleneely, Co. Donegal. Norman, who is an August 2017 born son of CF 52 and an Oldstone Egbert bred dam, was secured by John Boyle from Lettermacaward, Co. Donegal. His stable mate Neveers, who is a son of Goldstar Echo and a Fury Action bred dam, went North with Matt Workman from County Antrim. This rounded of a wonderful day for the Mc Dermott’s, who sold their three bulls for a total sum of €17,100. 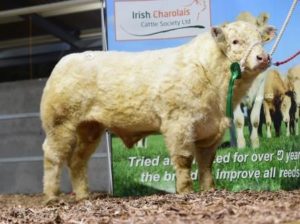 Ballynabreen Norman who sold for €5,000 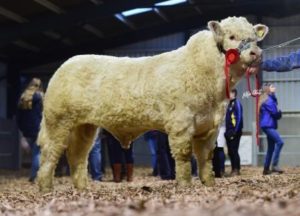 The third bull to sell for €5,000 was the Reserve Senior Male Calf Champion from this year’s National Charolais Show, Bostonia Nonstopabull. Exhibited by the Feeney brother’s from Enniscrone, Co. Sligo, this Davally Illusion son was tapped out as the winner of class four, before been snapped up by Christopher Connon from Scotland. 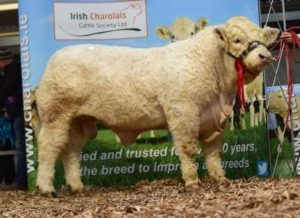 Bostonia Nonstopabull who sold for €5,000

Pat Keane from Westport in County Mayo received a call of €4,800 for his 17 month old first prize winner, Knockglass Noah. This powerful son of CF 52 stood top of the line a strong opening class of bulls, before selling to  suckler farmer, Frank Reynolds from Ballinaglera, Co. Longford. 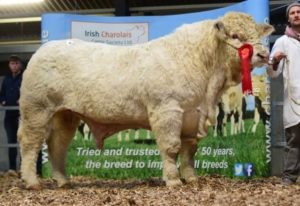 Longford breeder Martin Clyne traded his 17 month old, Cassina Nigel for €4,800. A second prize winner from the pre-sale show, Nigel is a son of Pirate and a Fiston bred dam. He sold with a boastful set of indexes including a five star terminal index of €141, a five star replacement index of €85 and a calving figure of 6%. This bull headed West with Liam Power from County Galway. 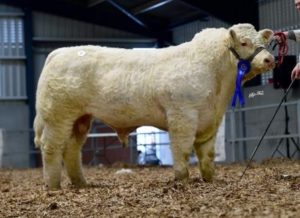 Kildalton College from Piltown in County Kilkenny had the final bid of €4,700 on Pottlereagh Noah ET exhibited by Elizabeth Hughes from Cootehill in County Cavan. This 16 month old son of Cavelands Fenian and a Hara Kiri bred dam, sold with one of the best set of the indexes in the Catalogue, comprising a five star terminal index of €149, a five star replacement index of €113 and a calving figure of 5.5%. Coraghy Neil ET exhibited by Aidan Harte from Clones in County Monaghan wasn’t far behind at €4,600. This stylish son of Goldstar Echo and a Padirac bred dam, flew under the hammer, selling to Niall Mc Laughlin from Northern Ireland. 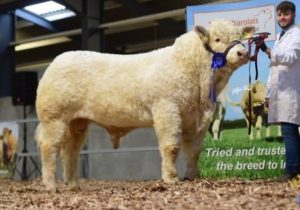 The Reserve Senior Champion was awarded to Aghafad Nickel ET exhibited by County Monghan breeder, Edward Walsh. This 15 month old son of Jumper and a Dromiskin Stallone bred dam, sold with a five star terminal index of €149 and a below average calving figure of 6.7%. Auctioneer Tom Cox dropped the hammer on Nickel at €4,400, selling to County Roscommon suckler farmer, James Roddy. 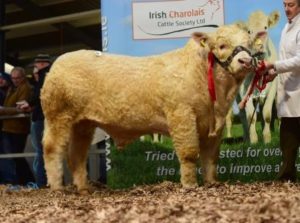 €4,300 for Drumcrow Ned sired by Fiston and exhibited by David Abbott from Killeshandra, Co. Cavan

€4,000 for Tullyvllage Nevin sired by Carrickbrack Hutch and exhibited by William Flynn from Ballinasloe, Co. Galway

€4,000 for Clenagh Notorious sired by Cavelands Fenian and exhibited by Michael Quin from Newmarket on Fergus, Co. Clare

€4,000 for Baurnafea Nighthawk ET sired by Loulou and exhibited by John Bambrick from County Kilkenny

€3,900 for Pottlereagh Nevan sired by Cavelands Fenian and exhibited by Elizabeth Hughes from County Cavan

€3,800 for Bostonia Nationwide sired by Pirate and exhibited by the Feeney brothers from Enniscrone, Co. Sligo

€3,800 for Knockglass Neptune 2 sired by Lisnagre Elite and exhibited by Pat Keane from Westport, Co. Mayo

The Society would like to wish all purchasers the best of luck with their new bulls. The next Society Show & Sale will take place in Tullamore Mart on Saturday 16th February 2019.