The Society held it’s first Show and Sale of the year in Tullamore Mart on Saturday last, with a large entry of 111 Bulls Cataloged. The Sale could only be described as a positive start to the year for the Charolais breed, with 69% of the Bulls on offer selling to an average of €3,150. Topping the trade at €6,100 was the Limerick bred bull, Grangwood Nephew ET, exhibited by Jerry O’ Keeffe from Knocklong, Co. Limerick. This 16 month old bull is a son of the ever consistent, Goldstar Echo and was tapped out as Reserve Junior Champion earlier in the day by Judge, David Connolly of the Brigadoon herd in Northern Ireland. After a lively round of bidding, the stylish nephew was secured in the sales ring by County Down suckler farmer, Brian Mc Conville. 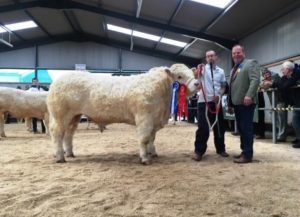 Not far behind at €6,000 was the Overall Junior Champion, Roughan Norman 3 exhibited by Pat Mc Clean from County Donegal. This high index young bull went to sale with a five star terminal index of €141, a five star replacement index of €96 and a below average calving figure of 6.5%. A son of the home bred Roughan Jason and a Roughan Divin bred dam, Norman was snapped up by Northern Ireland suckler farmer, T&T Fitzpatrick from County Down. 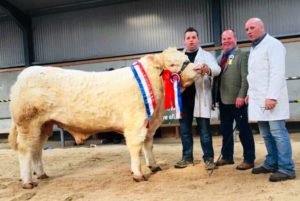 The Reserve Senior Champion of the day, Kilvilcorris Norman was next best in the sales ring at €5,600. Exhibited by Matt and PJ Ryan from County Tipperary, this September 2017 born bull is a son of Enfield Plexus and a CF 52 bred dam. Carrying a five star terminal index of €134, this well made bull was secured in the sales ring by Thomas Delaney from County Galway. The Ryan’s had a productive day’s trading, selling their three bulls for a total of €13,650. At €4,050 was Kivilcorris Niall, a son of Pirate and a Indurain bred dam. This bull sold with a decorative set of indexes, which included a five star terminal index of €169, a four star replacement index of €67 and a below average calving figure of 6.5%. Rounding of a wonderful day for the Ryan’s was Kilvilcorris Nestor at €4,000. This second prize winner from the pre-sale show is another son of the fore mentioned, Pirate, and a Prime Roberto bred dam. Nestor sold with one of the best spread of indexes in the Catalogue, including a five star terminal and replacement index, with a calving figure of just 6.5%. 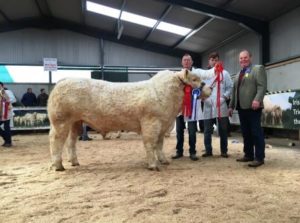 Judge, David Connolly found his Senior Champion in the form of Goldstar Nostradamus ET exhibited by Martin Ryan from Thurles, Co. Tipperary. This powerful September 2017 born bull is a son of the French sire, Loulou and Goldstar Godiva, a cow with a fantastic show career to her name. Nostradamus was purchased at €3,500 by County Galway suckler farmer, Meave O’ Higgins. Mrs. O’ Higgins also went on to acquire Brocca Nostradamus ET at €4,450, a September 2017 born son of Meillard Rj. Exhibited by John Barry Moran from County Westmeath, this bull sold with a five star terminal index of €146. 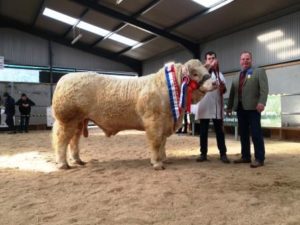 The Quinn family from Edenderry in County Offaly had successful day in the sales ring, selling their three offering’s for an average of €3,580. First up for the Ballym herd was the 17 month old Ballym Niall 2 at €4,150. This Goldstar Hector son stood top of the line in the pre-sale show. Next to trade hands for the Quinn’s was another son of Goldstar Hector, Ballym Nova at €3,600. This August 2017 born bull carries a five star terminal index of €130 and found a new home in County Armagh with Dermott kennedy. Rounding of their day’s trading was Ballym Nigel at €3,000, a 17 month old son of Goldstar Luigi Et, who himself was a Junior Male Calf Champion at the National Charolais Show.

It was clear from early on in the Sale that Suckler farmers were out in force to secure quality commercial type Bulls. One of the first lots into the ring, Pottlereagh Eddie went under Tom Cox’s hammer at €4,050. Exhibited by Elizabeth Hughes from County Cavan, this one is a son of the popular NCBC sire, Fiston and a Pirate bred dam. He sold with a five star terminal index of €137, accompanied by a calving figure of 7.7% and went West with a County Galway suckler farmer. Hitting the €4,000 mark was Callo Nidge ET, a son of CF 52 and a Inverlochy Ferdie bred dam. Exhibited by Eugene Hand from County Westmeath, this bull carries a five star terminal indxex of €162. The 16 month old Nidge found his new home in Northern Ireland with Sean Bradley. Not far behind at €3,850 was Kilcleagh Noel, a 18 month old son of Goldstar Echo. Exhibited by Noel Farrell from Moate in County Westmeath, this powerful bull stood second in a strong class of bulls earlier in the day.

Three bulls then shared the same price tag of €3,700. The first to go through the ring was Grangwood Native exhibited by Jerry O’ Keeffe from County Limerick. From the same herd as the Sale leader, Native is a son of the home bred, Grangwood Lock. This September 2017 born bull sold with a boastful terminal index of €154 to Tony Kelly from County Galway. Next to hit the €3,700 mark was fellow Galway man, William Flynn from Newbridge with Tullyvillage Neptune. A son of Fiston and a Jupiter bred dam, this bull carries a five star terminal index of €141. Shane Muldoon from Newtowncashel in County Longford then realized €3,700 for his young bull, Coolategal Norman. This 15 month old bull who is a son of CF 52 and an Umberto bred dam, will now join County Clare suckler farmer John Daveron.

€3,650 for Knockmoyle10 Neptune ET sired by Pirate and exhibited by Gerry Lynch from County Clare

€3,500 for Garracloon Nice ET sired by Major and exhibited by Aidan Mc Hale from County Mayo

€3,500 for Scardaune Ned sired by Derryowen Harvey and exhibited by Oliver Conway from County Mayo

€3,350 for Goldhill Nero sired by Blelack Digger and exhibited by Padrag Murphy from County Kildare

The next Society Show & Sale is the Premier which takes place in Elphin Mart, Co. Roscommon on Saturday the 23rd March