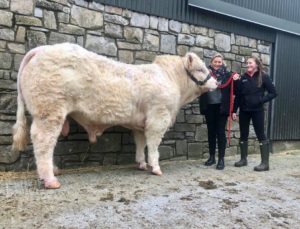 Ballym Naughty-boy pictured with breeders, Louise and Isabelle Quinn from Edenderry, Co. Offaly. Naughty boy recently sold in a private deal to James Rice, Lanalea road, Armagh. James and his son Shane run a commercial herd of over 120 suckler cows. They were recently awarded Northern Ireland’s Charolais Suckler herd of the year for 2018. A son of the herd’s stock bull, Goldstar Hector, this is the second bull from the Ballym Charolais herd to take up residence on the Rice’s farm.They previously purchased Ballym Isaac at the April 2014 Charolais Show and Sale in Tullamore. Since his arrival, Isaac is consistently producing top quality prize winning weanlings. The Quinn’s would like to wish the Rice family the best of luck with Naughty Boy and they hope that he bring’s the same success as Isaac did.