Once again it was a strong demand from Northern customers which underpinned a lively trade for Charolais Bulls at last weekend’s Premier Show and Sale in Elphin Mart. Overall 18 bulls and 5 heifers were exported, which boosted the overall clearance in the bulls to 78% at an average of €3,870. A total of 24 bulls sold for €4,000 or more. The smaller offering of heifers seen a clearance of 52%, selling to an average of €2,877. Quality bulls were hotly sought after, with Euro star indexes and calving figures also having a major impact. Judge for the day was Alwyn Williams of the Castellmawr herd in Wales. Alwyn was accompanied by junior Judge, Mark Mc Govern from County Sligo, a member the Society’s ever growing Youth Development Programme. Topping the trade at €7,800 was the Overall Junior Male Champion of the Show, Tullaghan Ozzie exhibited by Michael Daly from Tullaghan in County Leitrim. This stylish young bull came first in what was possibly the strongest class of the day, which also produced the Overall Reserve Junior Male Champion. A son of Goldstar Echo and a Grimaldi bred dam, Ozzie sold with a five star terminal index of €153 and a calving figure of 8.2%. The 14 month old bull attracted numerous bids before eventually residing with Gordon Cutler from Enniskillen in Northern Ireland. 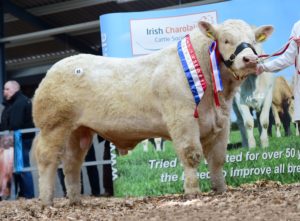 Next best in the sales ring at €6,100 was the second prize winner, Whinfort Ollie exhibited by Geremy Mc Gonigle from Rossnowlagh in County Donegal. A son of CF 52 and a Liscally Eti bred dam, this high terminal index young bull was just 14 months old. Snapping up the classy Ollie was Peader Mc Kenna from County Tyrone. Geremy and wife Valerie would go on to more success when they received a call of €4,500 for their second offering, Whinfort Noel 2. Another son of the great CF 52, this bull sold with a five star terminal index of €168 and a below average calving figure of just 6%. This 16 month old bull sold to Tom Ronayne from Ballyhaunis in County Mayo. 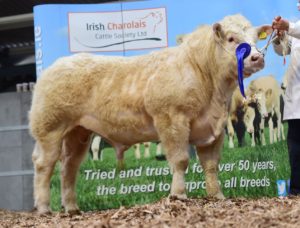 At €6,000 was the much anticipated Mullawn Oscar exhibited by Austin Garvey from Drumsna in County Leitrim. This huge son of CF 52 and a Pirate bred dam was looking to follow in the footsteps of his full brother, who sold for the top price of €11,500 at last year’s Premier Sale. Having stood third in his class, Oscar went to sale with a five star terminal index of €157 and a calving figure of just 7.2%. Having failed to meet his reserve in the ring, the 14 month old bull exchanged hands outside the ring, selling to Neil Barclay of the Harstone herd in Scotland. 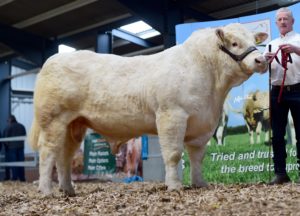 Also hitting the €6,000 mark was Limkiln Oscar 2 ET, exhibited by Richard Hackett from Clonlara in County Clare. A son of Panama and a Enfield Plexus bred dam, this young bull was just 14 months old going to sale. Having been awarded the Junior Male Champion earlier in the day, this outstanding bull attracted bids from all corners of the ring, before eventually being knocked down to suckler farmer, Richie Nixon from Carrigallen in County Leitrim. 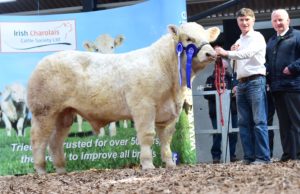 The third bull to trade at €6,000 was Roughan Nevers 2 ET, exhibited by Pat Mc Clean from County Donegal. A son of the home bred Roughan London and Roughan Gemma, this high index bull also picked up a first prize rosette in the pre-sale show. Having failed to meet his reserve in the sales ring, Nevers was secured outside the ring by Andy Hillan from Northern Ireland. 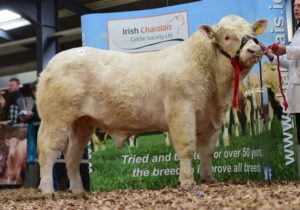 Judge Alwyn Williams found his Senior Male Champion in the form of Fivestar Nenuphar 2 ET exhibited by Lewis Regan from Castlegal in County Leitrim. This well made bull is a 16 month old son of the UK sire, Anside Foreman and the Major daughter, Enniscrone Fiona ET. The eye catching Nenuphar attracted significant interest in the sales ring before eventually being wrapped up at €5,600 by Tom Mc Cormack from Strokestown in County Roscommon. 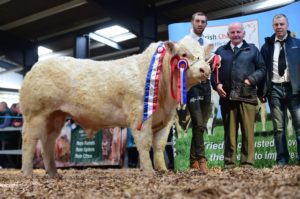 Also trading at €5,600 was the first prize winner, Firoda Nollaig exhibited by Seamus Nolan from Castlecomer in County Kilkenny. This powerful son of the fore mentioned Goldstar Echo and the Dromiskin Phoenix daughter, Firoda Gail, carries a five star terminal index of €149 and a below average calving figure of just 6.9%. After some lively bidding, Auctioneer Tom Cox dropped this one to suckler farmer, Raymond Linnane from County Roscommon. 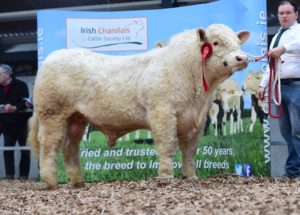 County Kerry breeder, John Culloty from Castleisland made the long journey worthwhile, when he sold his two bulls for a total sum of €10,400. First up at €5,400 was the first prize winner, Blackroad Oscar, a 14 month old son of the ever consistent Goldstar Echo. This stylish young bull sold with a decorative set of indexes and a proud pedigree, which includes Pirate and Prime Sue. Oscar will now join County Leitrim suckler farmer, Michael Mc Hugh. Topping of a great day for the Kerry man was Blackroad Owen, another 14 month old son of Goldstar Echo. Carrying a below average calving figure of just 6.5%, this third prize winner was secured with a bid of €5,000 by Frank Naughton from Knockcroghery in County Roscommon. 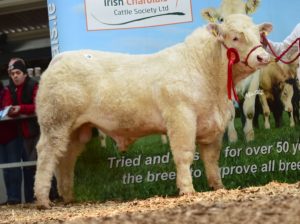 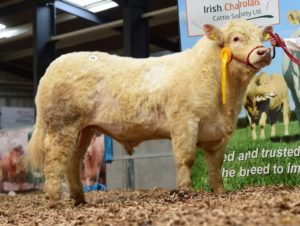 The Reserve Male Championship was awarded to Enniscrone Naji exhibited by Ronan Gallagher from Enniscrone in County Sligo. An October 2017 born son of of the home bred Enniscrone Harry and Enniscrone Jillian, Naji exchanged hands in the sales at €5,100, selling to a Northern Ireland suckler farmer. 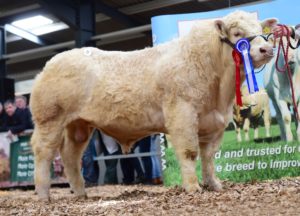 Welsh man, Owain Llyr was successful in his bid of  €5,000 for Ballydownan Ned Flanders ET, exhibited by Peter Spollen from County Offaly. This 15 month old bull who stood third in his class in the pre-sale show, carries some of the breed’s great’s in his pedigree, including Jupiter, Major and Ballydownan Simone. 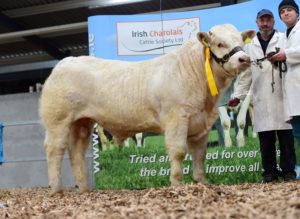 Martin Ryan from Thurles in County Tipperary received a call of €4,800 for his second prize winner, Goldstar Newton. Once again, a son of the home bred Goldstar Echo, this time a son of the Invincible bred daughter, Goldstar Fifi. Carrying a five star terminal index and a below average calving figure of 6%, he sold back down South, to fellow Tipperary man, Ray Dempsey from Roscrea. The Ryan’s also sold their second offering, Goldstar Neidin ET at €3,400. Neidin is a 15 month old son of the popular Pirate and the Jupiter daughter, Goldstar Cosmogirl.

One of the youngest and most eye catching bulls of the day, Kinnard Ocean traded at €4,600. Exhibited by local man, Adrian Morris from Elphin in County Roscommon, the 12 month old Ocean stood top of the line in the last class of the day. Despite lacking in indexes, this correct Goldstar Echo son sold on his stylish appearance to the Jones’s from Ratona in County Fermanagh. The same herd landed another €4,100 for Kinnard Napoleon. This December 2017 born bull is a son of Pirate and a Liscally Lancer bred dam. Unlike his stablemate, Napoleon displayed a full set of indexes and an attractive calving figure of just 4.8%. He sold to a County Roscommon suckler farmer. 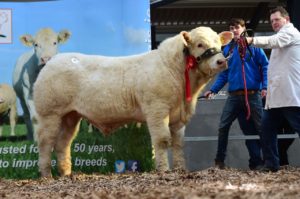 Other leading prices in the bull section included:

€4,500 for Lisnagre Nesror sired by Pirate and exhibited by Jim Geoghegan from Streamstown, Mullingar, Co. Westmeath

€4,300 for Coolembley Notorious sired by Blelack Digger and exhibited by Martin Herity from Drumcliffe, Co. Sligo

€4,200 for Noble Nailor sired by Pirate and exhibited by Harry Noble from Edgeworthstown, Co. Longford

€4,100 for Clooncommon Ollie sired by CF 52 and exhibited by John Lloyd from Kilmore, Co. Roscommon

€4,100 for Dereskit Nelson sired by Dromiskin Viceroy and exhibited by Basil Bothwell from Killeshandra, Co. Cavan

€4,100 for Tullaghan Oakley sired by Goldstar Echo and exhibited by Michael Daly from Tullaghan, Co. Leitrim

€4,000 for Chanonstown One To Watch sired by Cavelands Fenian and exhibited by Michael Carey from Killucan, Co. Westmeath

Leading the way in the female section at €5,100 was the Reserve Champion, Knockmoyle10 Marilyn ET exhibited by Gerry Lynch from Tulla, Ennis, Co. Clare. This well bred daughter of Texan gie and the prolific, Ashleigh Cleo went to sale in calf to Cavelands Fenian. After a vibrant round of bidding, Marilyn was knocked down to Northern Ireland breeders, James and Shane Rice. 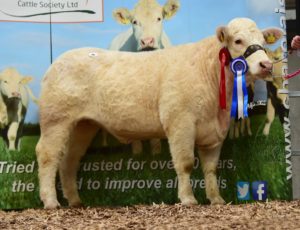 Taking the Overall Female Champion was Ballylast Nula ET, the Senior Female Calf Champion from last year’s National Charolais Show. Exhibited by John Mc Elchar from County Donegal, this powerful September 2017 born heifer is a daughter of Thrunton Voldemont and Ashleigh Venus. Having failed to meet her reserve in the sales ring, she left the ring unsold. 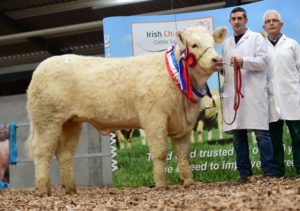 Lewis Regan was back in the money once again, when his 16 month old heifer, Fivestar Nectar ET exchanged hands at €3,500, selling to Daniel Mc Alonan from Northern Ireland. Nectar is a daughter of CF 52 and a Oldstone Egbert bred dam. 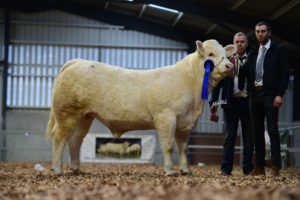 The next Society Show and Sale will take place in Tullamore Mart on Saturday the 20th April 2019 and will include the dispersal Sale of Phillip Leech’s Blancfield herd in County Wexford.