Goldstar Oasis from the herd of Martin Ryan in County Tipperary stole the show in Tullamore last Saturday, in what could only be described as a mixed trade for Charolais bulls. A small entry of just over 40 bulls resulted in a 60% clearance at an average price of €3,010. Topping the trade at €6,000 was the Overall Champion of the show, Goldstar Oasis. A son of the Texan gie bred daughter, Goldstar Jamaique, and Goldstar Hugo 2 ET, this classy 13 month old bull attracted significant interest in the sales ring before selling to a County Clare suckler farmer. 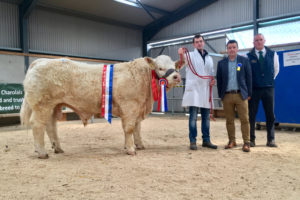 Two Roughan bred bulls from Pat Mc Clean’s herd in County Donegal exchanged hands at €5,000 and €4,400. First into the ring was the third prize winner, Roughan Once who was knocked down at €4,400 to Martin Frehill from Ballinasloe, Co. Galway. A son of Roughan Gibraltar and a Roughan Enzo bred dam, this 14 month old bull carried a five star terminal index of €141 alongside a calving figure of just 6.4%. His stablemate and second prize winner, Roughan One exchanged hands outside the sales ring, selling for the days second highest price of €5,000. Another 14 month old son of the home bred Gibraltar, this bull also carried a five star terminal index, accompanied by a well below average calving figure of 5.7%. This well made young bull sold to a suckler farmer in Northern Ireland. 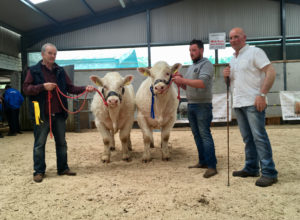 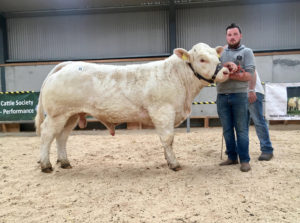 Sheafield Oscar, a stylish young bull from the Sheafield herd of Sean Moreton in County Leitrim was next best at €4,000. This 13 month old son of Cavelands Fenian and a Lisnagre Elite bred dam stood top of the line in his class in the pre-sale show. Oscar sold with full set of indexes and will now take up residence on a suckler farm in County Tipperary. 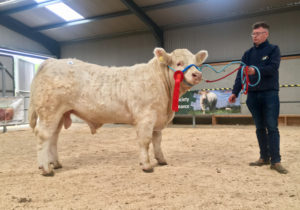 Judge for the day, Patrick Mc Cabe from the Blakestown Charolais herd in County Louth tapped up Dereskit Nathan 923 as his Reserve Overall Champion. Exhibited by Basil Bothwell from Killeshandra in County Cavan, this September 2017 born bull is a son of Fiston and a Blakestown Seigneur bred dam. Selling with a five star terminal index of €133, the Cavan bred bull exchanged hands at €3,500. 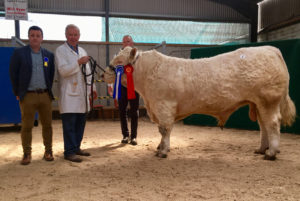 €3,000 for Dalehill Otto sired by Fiston and exhibited by Basil Kells from Killeshandra in County Cavan

€3,000 for Kilvilcorris Oscar sired by Goldstar Echo and exhibited by Matt Ryan from Thurles in County Tipperary

€3,000 for Sheafield Omar sired by Cavelands Fenian and exhibited by Sean Moreton from County Leitrim

€3,000 for Cuillmore Oisin sired by Fiston and exhibited by Thomas Keane from Westport in County Mayo

€3,000 for Windmill18 Officer sired by Blelack Digger and exhibited by Richard Nerney from Elphin in County Roscommon