This year the Irish Charolais Cattle Society will have their National Show Champions on display in their stand at the Ploughing Championships. This will include the Overall Champion, Crossane4 Niamh and the Overall Senior Female Calf Champion, Goldstar Osanna, as well as many others. There will be a showcase of top quality commercial Charolais cattle on view. This will include Charolais weanlings from the All-Ireland Super Suckler Cow & Calf Competition which took place in Bonniconlon Show in early August. 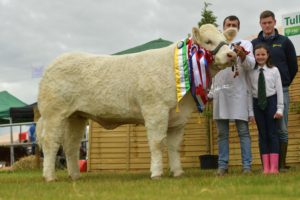 Like every year, the Society will hold a raffle on their stand for a well-bred Charolais Heifer. In recent years the Society has donated over €35,000 to various Charities with the proceeds of these Raffles. The Annual Charolais Yearbook is always released in conjunction with the Ploughing Championships and this year is no different. This year’s Yearbook will be bigger than ever, packed with news on past and upcoming events within the Charolais breed. The newly released Commercial Charolais booklet’s will also be available, containing up to date information on the Charolais breed for the commercial farmer.

Representatives from the Irish Charolais Cattle Society including breeders, Council members and staff will be there to meet and greet all those passing through. The Society’s main sponsor, Greenvale Animal Feeds will be present on the stand throughout the three days. Information on upcoming autumn shows and sales of pedigree Charolais cattle will also be readily available. The Charolais stand will be located at Block 2, Row 8, Stand 191.