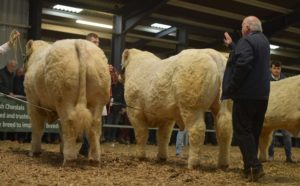 Last Saturday’s Christmas Cracker Show and Sale in Elphin Mart will remain in the memories of many breeders for some time, and all for the right reasons. The Sale provided a fantastic trade for Charolais bulls right throughout the day. Overall, 87% of the 83 bulls present on the day sold to an average of €4,275. Despite all the negativity surrounding farming and beef production recently, it was uplifting for all those present to witness the vibrant bidding and such a tremendous atmosphere around the ringside. It was clear for all to see that suckling farming is still alive and well.

One man that will remember this Sale for some time is debutante breeder, Conor O’ Neill from Athboy in County Meath. His first outing to a Society Sale seen him sell his 14 month old bull, Bud Orpheus, for the top price of €11,500. This powerful son of CF 52 also picked up a red rosette in the pre-sale show, which was hotly contested in all nine classes. His dam, Western Icon is a daughter of Pirate who was purchased as a breeding Heifer from Joe Clancy in County Galway. The Sale topper also packed an impressive terminal index of €162 and a calving figure of just 6.5%. After some lively bidding, Dovea Genetics eventually secured Orpheus for their AI stud. 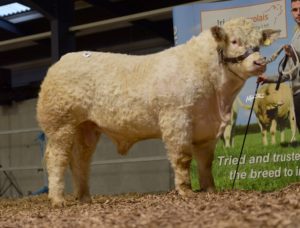 It was certainly a day to cherish for Rory Cullen from Killoe in County Longford, who picked up both the Intermediate and Reserve Intermediate Championship with his stylish pair of bulls, Glera Oran and Glera Oneshot. The pair would also go on to acquire the second and third highest prices of the day, at €10,200 and €9,500. 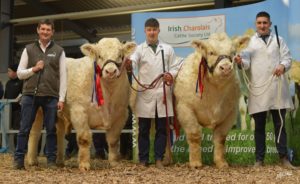 Selling at €10,200 was the Intermediate Champion, Glera Oran, who is a son of Cavelands Fenian and an Oldstone Egbert bred dam. Born in August 2018, Oran displayed eye appeal alongside a five star terminal index of €149 and a calving figure of 8%. Snapping this one up was the National Cattle Breeding Centre. 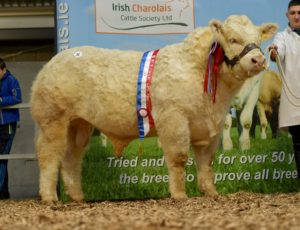 Not far behind Oran was his stablemate and the Reserve Intermediate Champion, Glera Oneshot at €9,500. A son of the legendary CF 52 and another Oldstone Egbert bred dam, this 15 month old bull carries a boastful terminal index of €164 and a calving figure of 8.4%. Wrapping him up was Northern Ireland suckler farmer, William Adams from County Tyrone. 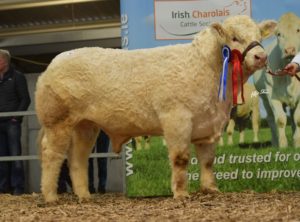 Nest best in the Sales ring at €9,200 was Goldstar Oscar from the Ryan family in County Tipperary. This tremendously well made bull is once again a son of none other, than CF 52. His dam is the well known show cow and Valseur daughter, Goldstar Falkland. At just 14 months old, Oscar catalogued with an eye catching five star terminal index of €178 and well below average calving figure of 5.1%. This one also went North with William Kelly from County Down. The Ryan family also traded the 15 month old Goldstar Organdi ET at €5,500. Organdi is a son of Goldstar Hugo ET and is a full brother to the €11,000 Goldstar Osanna.

Trading at €9,000 was Cloonglasna11 Oscar exhibited by the Egan brothers from Ballina in County Mayo. Having picked up the Overall Senior Male Calf Championship at this year’s National Charolais Show, this entry was always hotly anticipated. Judge Terry Coghill from the Orkney Islands, who was accompanied by Junior Judge, Cathal Gormley, made no hesitation in awarding the Mayo bred bull the Junior Champion in the pre-sale show. A son of Balmyle Vagabond and a Cloverfield Excellent bred dam, this 14 month old bull catalogued with a five star terminal index of €145. He sold to a County Cavan suckler farmer. 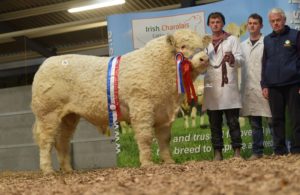 The Roughan herd of Pat Mc Clean in County Donegal enjoyed a wonderful day’s selling, trading five bulls for a total sum of €28,000. Leading the Roughan charge was Roughan Ondon 2, a well muscled son of the outstanding Roughan Gibraltar and a Roughan Galant bred dam. This September 2018 born bull carries a five star terminal index of €154 and a well below average calving figure of 6.2%. 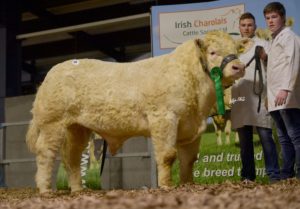 Also hailing from the Roughan herd was the Overall Senior Champion, Roughan Outh. This June 2018 born bull is a son of Roughan Justbeau and a Roughan Echo bred dam. He catalogued with a four star terminal index of €124 and a four star replacement index of €79, alongside a calving figure of 8.1%. Padraic Hegarty from County Longford secured Outh with a bid of €5,600. Hot on his heel’s was his herd mate, Roughan Owner at €5,500. This 14 month old bull is a son of the herd’s new stock bull Roughan London and a Roughan Echo bred dam. He was knocked down to Matt Workman from County Antrim. 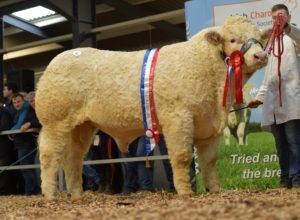 Richard Hackett from Clonlara in County Clare received a call of €7,600 for his 14 month old Limkiln Oats 2 ET, who stood top of the line in his class in the pre-sale show. This Pirate son out of a CF 52 bred dam attracted a lot of interest all year, as a regular winner on the Summer show circuit. Carrying a whopping five star terminal index of €176, Tom Cox had no problem looking for bids on this one, eventually knocking him down to Gilbert Anderson from County Donegal. 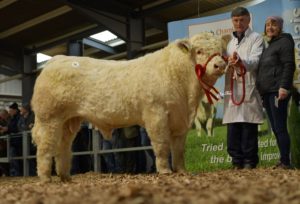 Jon and Lewis Regan from Castlegal in County Leitrim also had an eventful day in the Sales ring, selling their five entries for a total sum of €22,000. Leading their offering’s at €7,500 was Fivestar Opal 3 ET, who was also awarded the Reserve Junior Champion earlier in the day. This 14 month old bull is a son of Goldstar Echo and the prolific Padirac bred dam, Maerdy Entry. Snapping this one up was Michael Cosgrove from Roscrea in County Tipperary. The Castlegal men then traded his full brother, Fivestar Opal 2 ET at €5,200. Martin Barr from Crocketford in Scotland made no mistake in having the final call on this one. 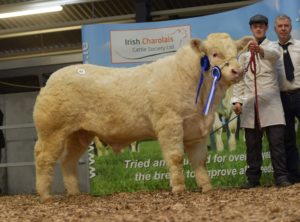 The Mc Govern brothers from Fivemilebourne enjoyed another wonderful day out, parting ways with their two entries for €12,000. The duo first received a call of €6,000 for Crossane4 Oscar, who claimed the Reserve Senior Championship that morning. This classy son of Whitecliffe James is the first calf of Clenagh Lola 2 ET, who herself was purchased at the Premier Show and Sale in Elphin in March 2018. He sold to Gordan Davis from Dromore in Northern Ireland. 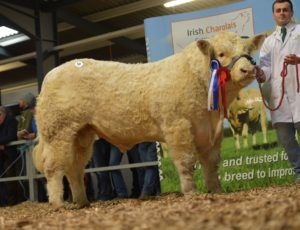 His companion, Crossane4 One Of A Kind sold for the same price tag of €6,000 to David Chestnutt from Bushmills in County Antrim. This powerful bull was a regular prize winner on the Show circuit this summer and is a son of the french sire, Heracles, and the Liscally Eti bred daughter, Tonroe Hippie. 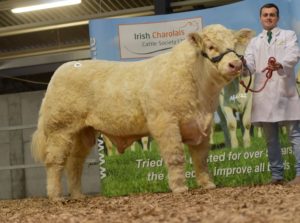 Crossane4 One Of A kind

The one and only CF 52 produced the goods once again, when Brendan Mc Feely from Ballybofey in County Donegal exchanged hands with another son, Daisyhill Orlando, for €5,800. At just 13 months old, this young bull displayed real potential along with a five star terminal index of €144. After picking up a second prize rosette in the pre-sale show, Auctioneer Tom Cox dropped the hammer to Jennifer Clarke from County Derry.

The Donegal men were back in action once again, when John and Kevin Mc Dermott from Innishowen sold Ballynabreen Oliver 2 for €5,600. A son of Blelack Digger and a Lyonsdemesne Tzar bred dam, this 15 month old bull displayed one of the most decorative set of indexes in the catalogue, along with a calving figure of 7.1%. Oliver also went North with Matt Workman from County Antrim.

At just 13 months old, Creeva Ollie exhibited by Gerald Lavin from County Sligo went under the hammer at €5,200, selling across the Irish Sea to Wales. This quality young bull who is a son of Lisnagre Elite and a Cf 52 bred dam, also packed a five star terminal index of €152 and a calving figure of 9.4%.

Two bulls then shared a price tag of €5,000. The first to go through the ring was Fieldview Orlando ET exhibited by David Erskine from Crosses in County Monaghan. This stylish 15 month old bull is one of the first sons of Goldies Icon to go for sale in Southern Ireland. 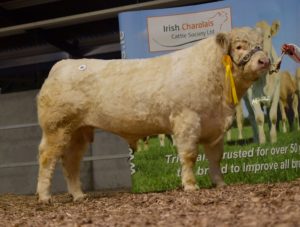 Also selling at €5,000 was the first prize winner from the last class of the day, Grangwood Opel ET exhibited by Gerry O’ Keeffe from Knocklong in County Limerick. At just 13 months old, this Texan gie son caught the eye of Noel Considine from Lisdonvarna. 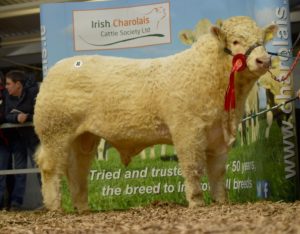 €4,700 for Noble Otto 2 sired by Untel and exhibited by Harry Noble from County Longford

€4,500 for Kilvilcorris Omar sired by Goldstar Echo and exhibited by Matt Ryan from County Tipperary

€4,400 for Corney Ox sired by Jaquard and exhibited by David Magee from County Cavan

€4,100 for Roughan Olant sired by Roughan Jason and exhibited by Pat Mc Clean from County Donegal

€4,100 for Dereskit Oden 957 sired by Dereskit Jacob 3 and exhibited by Basil Bothwell from County Cavan

€4,000 for Tonyglasson Oisin ET sired by Pirate and exhibited by Martin Hughes from County Cavan

€4,000 for Cornadrung Orville sired by Pottlereagh Mark and exhibited by Karl and Tom Farrell from County Longford

€4,000 for Rosanna Olympus sired by Sesame and exhibited by Pat Stephens from County Carlow