As we enter a time when the environment we live in is of such importance, all sectors must become as efficient as possible to be sustainable into the future. Agriculture is no different and we are being told Cattle farmers must produce Beef as efficiently and environmentally friendly as possible. As we all know, the population of the World is increasing, which means there will be a growing demand for more food. The big question is, how can we produce more food without increasing the amount of harmful emissions being released into the atmosphere.

Obviously in terms of Beef production, the most cost efficient and environmentally friendly way to produce Beef is from an animal that produces as much meat as possible, as young as possible, reducing our Carbon footprint. In terms of the positive effect of these kind of animals on the Climate, research by the Irish Cattle Breeding Federation (ICBF) and Teagasc has shown that by reducing the age at slaughter from our suckler herd by 1 month, is the equivalent to not having to slaughter 50,000 suckler cows.

Figures released from the ICBF have shown that the Charolais breed has made remarkable genetic progress regarding this kind of efficiency in recent years. The fact is Charolais Cattle are producing more Kilograms of Beef at slaughter today than they were 10 years ago, and at a younger age. Their ability to do this makes them the ideal breed to produce sustainable, climate friendly Beef. 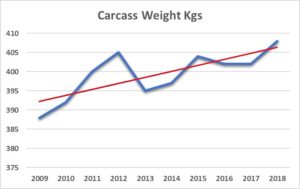 The chart above illustrates that over the last 10 years, Carcass weights of Charolais sired Cattle have increased, which means as a breed Charolais are improving on one of the most important terminal traits of all. That said, the most important fact, is that the average age at slaughter of these Charolais sired Cattle has decreased substantially, as you will see in the chart below. In simple terms, Charolais are producing heavier carcasses, at a younger age than they were 10 years ago. This is not only improving Beef farmers efficiency and reducing costs on farm, it is also reducing greenhouse gas emissions and at the same time increasing food output for a growing population. 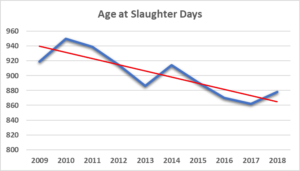 These gains and improvements within the Charolais breed over recent years certainly illustrates that Charolais have become the environmentally friendly beef breed. As well as these advances, data from the ICBF shows that the conformation of Charolais sired Cattle has improved in recent years. As a Country that has a grading system within our Beef Factories, this is another extremely important step in the right direction for the Charolais breed. This progress is shown in the chart below. 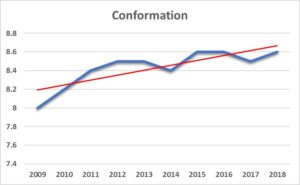 These improvements within the Charolais breed has led to an increase in the overall Terminal index of the breed as illustrated in the chart below. One would think that such advances in Carcass weight and conformation would increase calving difficulty and have a negative effect on replacement traits, ironically this has not been the case within the Charolais breed. The breed has demonstrated the ability to make improvements within Replacement and Terminal traits, and at same time reduce the breeds average calving difficulty.

Terminal Index of the Charolais Breed between 2008 and 2018 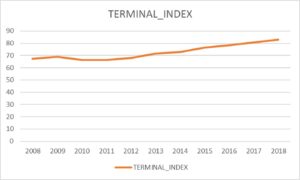 The graph below clearly shows that the Charolais breed has improved on Replacement traits in recent years, especially within the last five years. These gains are obviously having their impact at farm level, which can be seen from the fertility and milk data records within the Charolais breed.

Replacement Index of the Charolais Breed between 2007 and 2017 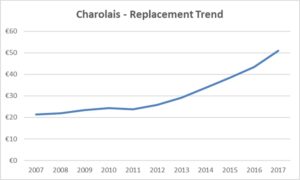 Calving Difficulty Trend of the Charolais Breed between 2007 and 2017 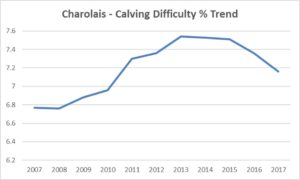 The gains made within the Charolais breed over recent year’s is clearly a result of breeding decisions made at farm level by the breeders. A well-planned breeding programme can certainly deliver remarkable results as demonstrated here. However, breeders must continue to produce the most efficient Charolais Cattle they possibly can. The Society’s latest requirement for all animal’s entering Society Sales to be Genomic and Myostatin tested is the next step in ensuring the Breed continues to lead the way in Genetic advancements.

With such emphasis on Climate change and Greenhouse gas emissions from Agriculture, we must all strive to produce Beef as efficiently and cost effectively as possible. No breed can do this better than Charolais. The growth and development of the breed since its introduction to Ireland over 50 years ago is a testament to that. These latest figures certainly reinforce the fact that Charolais can produce beef more efficiently, cost effectively and environmentally friendly than other beef breed.