The flourishing trade for Charolais Bulls has started were it left off in 2019, with another lively sale in Tullamore last Saturday. There was a smaller than normal entry, with many bulls destined for the Sale finding new homes on farms in recent weeks. The strong trade for Charolais weanling’s and stores in the commercial market clearly driving demand. Overall, 90% of the bulls forward sold to average €3,254. This was also the first official ICCS Sale in which all bull’s were Genotyped and Myostatin tested. Topping the trade on the day was Rathfeston Oz ET at €4,800. The property of Wayne Mulligan from Geashill in County Offaly, this stylish 17 month old bull is a son of Jupiter and Rathfeston Lizzy ET, a daughter of french sire, Erckmann. Oz catalogued with a five star terminal index of €143, a calving figure of 6.3% on beef cows and carried one copy of the F94L gene. After brisk bidding from many potential buyers, he was eventually knocked down to Mike Kissane from Cahirciveen in County Kerry. 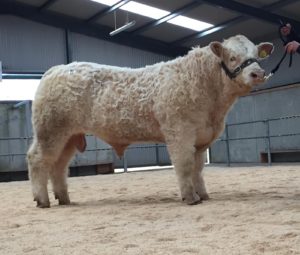 Not far behind at €4,700 was Matt and PJ Ryan with Kilvilcorris Olav. This 16 month old bull is a son of Pirate and the Major bred daughter, Kilvilcorris Ladonna. Olav displayed an impressive set of indexes which included a five star terminal index of €148, a four star replacement index of €67 and a below average calving figure of 4.8% on beef cows. This second prize winner from the pre-sale show also carries one copy of the F94L gene. He found his new home with a suckler farmer from County Westmeath. 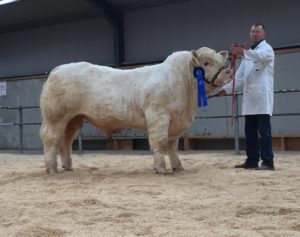 At €4,600 was the Overall Champion from the pre-sale show, Cloughbrack Ohio exhibited by Mattie Kelly from Newbridge in County Galway. This 16 month old bull caught the eye of Judge, Alan Burleigh from the moment he entered the ring. A son of Enfield Plexus and a CF 52 bred daughter, this bull carries two copies of the Q204X gene. He was snapped up in the sales ring by Thomas Hughes from Newry in County Down. 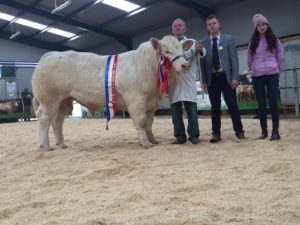 Two bulls then exchanged hands at €4,300. The first to go under the hammer was the first prize winner, Lisnagre Oz ET exhibited by Jim Geoghegan from Streamstown in County Westmeath. This 17 month old son of Pirate and the Major daughter, Ballydownan Curie, carries a whopping five star terminal index of €167 and a below average calving figure of €5.8% on beef cows. He sold to County Kerry suckler farmer, Tim O Sullivan. 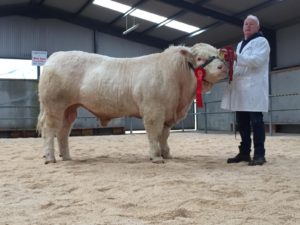 Also selling at €4,300 was Derryolam Otto, a son of CF 52 and a Pacha bred daughter. Exhibited by Niall Mc Nally from County Monaghan, the 16 month old Otto catalogued with a five star terminal index of €144, a below average calving figure of 4.3% on beef cows and displayed one copy of the F94L gene. He was wrapped up in the sales ring by Declan Murray from Roscrea.

Seamus Nolan from County Kilkenny then realised €4,200 for his October 2018 born, Firoda Odo ET. Sired by the popular french sire, Bourgogne, this young bull came to sale with an impressive set of indexes, including a five star replacement index of €116, a four star terminal index of €126 and a well below average calving figure of 3.9% on beef cows. Richard Steadman from County Wicklow had the final call on this one.

The Reserve Champion from the pre-sale show was awarded to Weskel Orlando ET, exhibited by Wesley Kellett from Bailieborough in County Cavan. This classy bull is a son of the high performance UK sire, Blelack Digger, and a Liscally Eti bred daughter. Displaying one of the most decorative set of indexes in the catalogue, Orlando failed to meet his reserve in the sales ring, but exchanged hands outside the ring at €4,000. 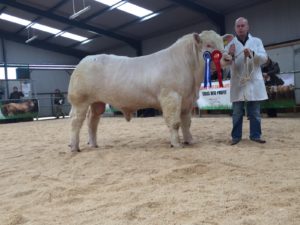 David Magee from Ballyconnell in County Cavan then received a call of €3,900 for the second prize winner, Corney Ozzy. A September 2018 born son of Goldstar Echo and a Padirac bred dam, Ozzy sold with a five star terminal index of €142 and went North with Dessie Rafferty from Omagh in County Tyrone. Also hitting the €3,900 mark was Drumcullen Obama, a 15 month old son of Drumcullen JJ. Exhibited by John Fleury from Killyon in County Offaly, Obama displayed a five star terminal index of €162, a five star replacement index of €123 and a calving figure of just 5.3% on beef cows. He also carries one copy of the F94L gene and once again went North with S & A Conway from Omagh.

€3,700 for Tullyharnet Ozie sired by Tombapik and exhibited by Noel Laverty from County Monaghan

€3,600 for Ballym Pat sired by Goldstar Luigi ET and exhibited by Louise Quinn from County Offaly

€3,500 for Kilvilcorris Oslo sired by Thrunton Bonjovi and exhibited by Matt and PJ Ryan from County Tipperary

€3,450 for Cloonshanna Ohmygod sired by Hideal and exhibited by Thomas Mc Gowan from County Roscommon

€3,000 for Portanure Othello sired by Carrickbrack96 Hutch and exhibited by Gerard Farrell from County Longford

€3,000 for Ballym Peter sired by Ballym Falcon and exhibited by Louise Quinn from County Offaly

The next Society Show & Sale is the Premier which will take place in Elphin Mart, Co. Roscommon on Saturday the 14th March, with 82 Bulls and 11 Heifers catalogued