On a day when only those that were exhibiting and buying were asked to attend due to the ongoing Covid-19 concerns, a young Longford bred bull, Noble Prince, was the undoubtedly the jewel in the Crown, selling for the day’s highest price of €15,000. Exhibited by Harry and Heather Noble from just outside Edgeworthstown, Prince received considerable interest from both pedigree and commercial breeders from Ireland and the UK. Earlier that day, Judge Will Shortt of the Woodpark herd in Northern Ireland awarded the Thrunton Fairfax son the Overall Junior Championship in the show ring. Born in January 2019, Prince also came with a five star Replacement index of €94 and a calving figure of just 5.2% on beef cows. After an exciting round of bidding, Bartley Finnegan from Elite Pedigree Genetics secured Prince for his AI stud. Taking all factor’s into account, quality bulls received a strong demand right throughout the day, with a clearance rate of 66%, selling to a healthy average price of €3,785. 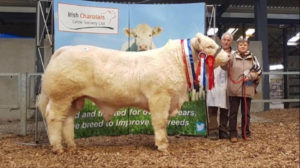 The day’s second highest price of €7,200 was achieved by Limklin Pajoe ET, exhibited by Richard Hackett from Clonlara, Co. Clare. This 13 month old Pirate son out of a CF 52 bred dam catalogued with an eye catching five star terminal index of €166 and a calving figure of 6.9% on beef cows. Pajoe stood second in his class in the pre-sale show and was wrapped up by Gerard Hackett from Clogher in County Tyrone. This bull carries one copy of the F94L and Q204X genes. Next best to him at €5,700 was Mattie Kelly’s first prize winner, Cloughbrack Pathfinder. This classy Goldstar Echo son was just 13 months old on the day of Sale and displayed a five star terminal index of €139. The Galway bred bull carries one copy of the Q204X gene and was secured in the Sales ring by Bernard Rudden from County Roscommon. 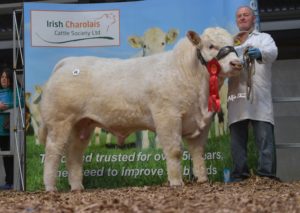 Gallaway Ollie was next best at €5,000, exhibited by Michael Kiernan from Carrigallen in County Leitrim. A Fiston son out of a Bova Sylvain bred dam, this 17 month old bull displayed a decorative set of indexes which included a five star terminal index of €154, a five star replacement index of €98 and a calving figure of just 6.8% on beef cows. Having secured a third prize rosette in the pre-sale show, he was snapped up in the sales ring by Brian Jordan from Deerpark in County Longford. 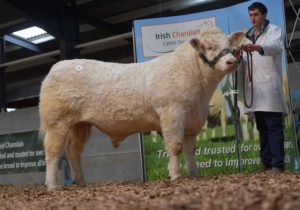 David Erskine from the Crosses in County Monaghan had a worthwhile trip, selling his two offering’s at €4,800 and €4,000, respectively. First up at €4,000 was Fieldview Option, an October 2018 born son of Whitecliffe James and a Prime Roberto bred dam. A second prize winner from the pre-sale show, Option catalogued with a five star terminal index of €134, a calving figure of just 4.8% and displayed one copy of the F94L gene. He sold to Anthony Mc Veigh from Carrickmacross in County Monaghan. His stablemate, Fieldview Pedro then went under the hammer at €4,800, selling to Donal Callery from Cookstown in County Meath. This stylish son of Goldstar Echo stood top of his class in the pre-sale show and carries one copy of the F94L gene. The 13 month old Pedro carried a four star terminal and replacement index. 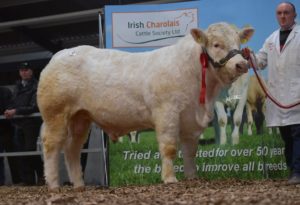 The Overall Senior Male Champion was awarded to Kilvilcorris Odran, a son of Prime Roberto and a Pirate bred dam. The property of Matt and PJ Ryan from County Tipperary, this powerful well made bull romped his way to €4,700 in the sales ring, selling to James Cosgrave in Enfield, County Meath. He too carried one copy of the F94L gene. 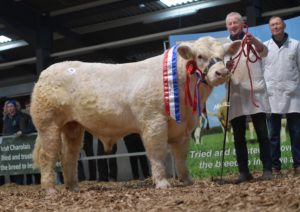 Two bulls then shared the price tag of €4,500, the first of which was the Reserve Junior Champion, Aghafad Prince. Exhibited by Edward Walshe from County Monaghan, the young 12 month old Prince is a son of Goldstar Echo and a Dromiskin Pedro bred dam. Having the final call on this one was John Gervis from Ballygawley in County Tyrone. Also hitting the €4,500 mark was Tullaghan Prince Charming, exhibited by Michael Daniel Daly from Tullaghan in County Leitrim. A third prize winner from the pre-sale show, Prince Charming is a son of Knockmoyle Loki and a Grimaldi bred dam. He sold with a five star terminal index of €163 and carries two copies of the F94L gene. This one also went North with Andrew Mc Cammond. 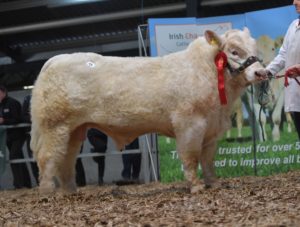 Geremy Mc Gonigle from County Donegal received a call of €4,400 for his 14 month old, Whinfort Orlando. A son of Goldstar Ludwig and a CF 52 bred dam, Orlando sold with a whopping five star terminal index of €198. Securing this one was Bryan Barber from Grange in County Sligo. 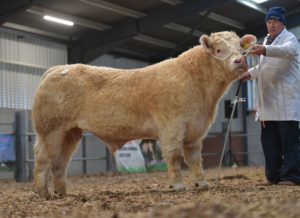 Bostonia Oldmcdonald exhibited by Brendan Feeney from County Sligo was tapped out as the Reserve Senior Champion. This Goldies Icon son is out of a Liscally Eti bred daughter, who was purchased at the Elite Heifer Sale in November 2017. Tom Cox dropped the hammer on this one at €3,200, selling to Padraig Loughney from Kinocn, County Sligo. 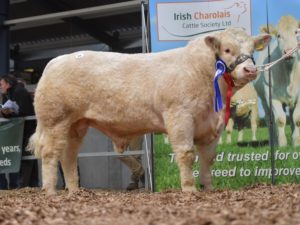 Other leading prices in the Bulls included:

€3,600 for Kilvilcorris Ortona sired by Thrunton Bonjovi, exhibited by Matt and PJ Ryan from County Tipperary

The small entry of Females met a good trade, selling to an average of €3,583. Topping the Female trade at €6,100 was the Champion, Clenagh Orion exhibited by the Quin family from Newmarket On Fergus, County Clare. This stylish two year old daughter of Clenagh Lyle sold in calf to Chic. She catalogued with a thumping five star terminal index of €178, and carries one copy of the F94L and Q204X genes. Securing the Champion was Cillian Nugent from Northern Ireland. 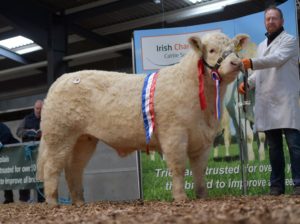 The Reserve Female Championship was awarded to Cloughbrack Peaches, the property of Mattie Kelly from Newbridge in County Galway. At just 14 months old, this young heifer is a daughter of Knockmoyle Loki and a Sportsmans Columbo bred dam. Peaches carries one copy of both the F94L and Q204X genes. This one went under Tom Cox’s hammer at €3,700, selling to Enda Murphy from County Monaghan. 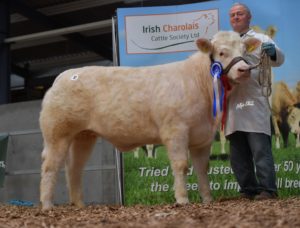 Michael Daniel Daly from Tullaghan in County Leitrim received a bid of €3,500 for Tullaghan Pixie, a daughter of Knockmoyle Loki and a Enfield Plexus bred dam. Having the final call on Pixie was Noel Lafferty from County Monaghan. Sean Reid from Ballyhale in County Kilkenny parted company with Kiltorcan08 Nelly at €3,400. This powerful in calf daughter of Goldstar Echo sold to Annita Duffy from Gurteen in County Galway.