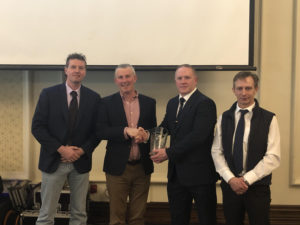 The Irish Charolais Cattle Society Club of the year Award for 2019 was awarded to the Galway Charolais Club at this year’s Annual General Meeting. Before presenting the Club with their award, Noel Mc Goldrick said the Galway Charolais Club, along with Society Vice President, Christy Comerford, have put a massive amount of work into creating awareness around Carbon Neutral Beef. They recently submitted a proposal to the Department of Agriculture and Ag-climatise 2021 to 2030. The proposals contain an 85 slide power point presentation, as well as a detailed 12 page document. The proposals submitted follows a six month research period and was completed in time to be lodged for the Ag-climatise 2021 to 2030. The President concluded by thanking the members of the Galway Club for their hard work and innovation over the past year.