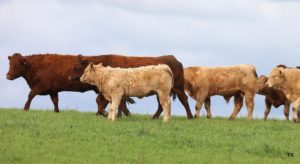 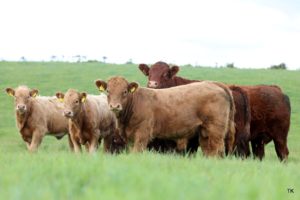 Bernard runs a Charolais bull because he believes they are an excellent cross with the Saler cow.  Saler females have a large pelvic area and are capable of calving heavy muscled Charolais bulls.  Bernard explains “It is a rarity for a Saler cow to need assistance at calving”.  In France, the home of the Charolais and Saler breeds, they have a preference for crossing Pedigree Salers with a pedigree Charolais bull, but Bernard finds no difference in calf quality from the purebred or 1st cross Saler cow and the Charolais bull. 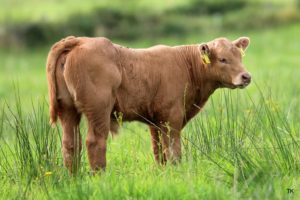 Bernard finds the Charolais cross Saler calf flesh easily, with little meal feeding required.  The calves born in August and September get meal in the shed from January until selling in March/April.  The Spring born calves are not meal fed. Bernard sells his weanlings from 300-350 kg at approximately 7/8 months . The Saler/Charolais cross consistently produces a golden coloured calf which are in demand and sell well throughout the year.  Last year Bernard’s highest price was €1170 for a 360 kg Charolais calf which he sold in Dowra Mart.  This year he achieved up to €3.16/kg in springtime for his early Autumn born calves. 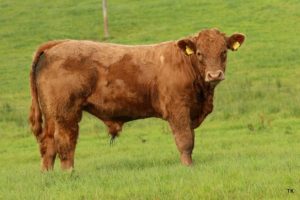 The Heifers are also sold through the marts as weanlings, with many purchased for breeding. Bernard has several repeat customers for his weanling heifers.  These 1st cross heifers retain the excellent calving ability of their Saler dams and when crossed back to a Charolais bull produce an excellent golden calf again. 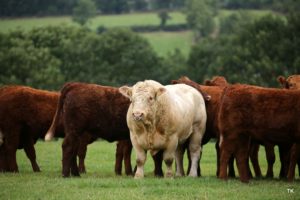 Bernard likes a large framed, well muscled Charolais bull, as the Saler cow still produces a small calf at birth which then thrive well as they develop. The larger, muscly Charolais bull tends to give that extra bit of development and shape as them calves go on. At the end of the day, demand determines Bernard’s farming practice, and he can sell these golden Charolais calves in any mart, any day of the week with minimum vet & meal bills!