The Society kicked off their Spring 2021 Bull Sales in Tullamore on Saturday last, and the first Breed Society sale of the year. New covid 19 restrictions on pedigree bull sales introduced by the Department of Agriculture posed many obstacles for both buyers and sellers. For the first time, exhibitor’s had to leave the Mart and their bull’s unattended for the duration of the viewing time. This allowed buyers to come in and view the bulls strictly by appointment only. Exhibitor’s did eventually get to return to their stalls as the Sale got underway, to prepare and bring their bull’s to the Sales ring. The viewing restrictions in place definitely affected the trade and buyers confidence, considering the number of viewers greatly exceeded the number of bulls on offer. Like all Mart sales at present, all bidding was online. It resulted in 64% of the bulls forward selling for an average of €3,769. The clearance rate clearly well down from 90% at the coinciding sale in February 2020. 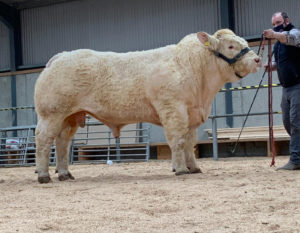 Topping that trade was Roughan Phillip, from the herd of Pat Mc Clean in County Donegal. A son Roughan Justbeau and a Roughan Dix De Coe bred dam, Phillip packed an impressive set of indexes and a calving figure of just 4.4% on beef cows. He went North to a herd in County Down. The Roughan herd would go on to sell their three offerings for a whopping average of €6,500. A wonderful day’s trading for Pat Mc Clean and the Roughan herd, who sold their fourth entry prior to the sale for an undisclosed sum to the UK. 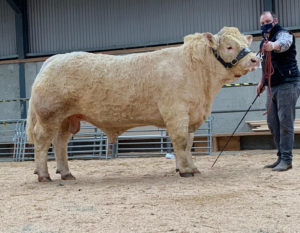 Roughan Percy was next best for the Donegal men at €6,700. This one is a son of the highly successful stock bull, Roughan Gibraltar and a Roughan Echo 2 bred dam. Once again the Donegal bred bull carried an attractive set of indexes and a calving figure of just 3.5%. Percy also carries one copy of the F94L gene. He sold to Tomas Madden from County Galway. Mc Clean’s third offering, Roughan Prince, received a call of €5,700, selling to Declan Mc Intyre from County Cavan. A son of the aforementioned Roughan Justbeau, this one catalogued with a page full of stars and a calving figure of just 4.5% on beef cows. He carries one copy of the Q204X myostatin gene. 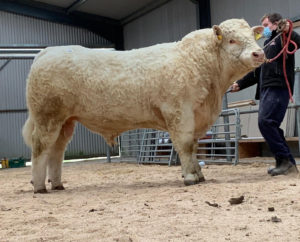 Niall Mc Nally from County Monaghan was another man who had a fantastic day at the Office. He sold his two bulls for €6,900 and €6,700, respectively. First up was Derryolam Pacha, a son of the ever consistent Goldstar Echo and a homebred daughter of Pacha. This 16 month old bull displayed a four star terminal and replacement index, along with a calving figure of just 5.6% on beef cows. He will now take up residence with a suckler farmer from County Longford. 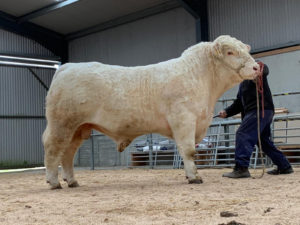 Derryolam Pirate followed shortly after his stable mate and finished up at €6,700. This time the sire is Fiston, the bull that seems to be causing quite a stir for commercial farmers. Just 15 month old, Pirate offered one of the most decorative set of indexes in the catalogue, which included a five star terminal index, five star replacement index, and a calving figure of just 4.9%. He also carried two of the heavy hitters of the breed in his back pedigree, Pirate and CF 52. This wrapped up a tremendous day for breeder Niall Mc Nally.

Selling at €6,600 was Fieldview Pete from the herd of David Erskine in County Monaghan. This 16 month old bull is another son of the popular NCBC sire, Fiston, and a homebred daughter of Anside Foreman. He displayed a five star terminal index of €152 and a calving figure of €6.9% on beef cows. Pete carries one copy of the Q204X gene. He went west to a herd in County Clare.

Next up at €6,400 was Rathfeston Pablo ET, exhibited by Wayne Mulligan from County Offaly. This classy bull was born in October 2019 and is a son of Balmyle Vagabond and an Erckmann bred dam. Short on stars but quality in abundance, Pablo will now head across the Irish Sea to Owain Llyr in Wales. 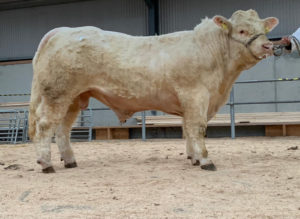 Nigel Peavoy from County Laois received a call of €6,000 for his much admired Monagh Paddy. This 16 month bull is a son of Goldstar Ludwig and a Prime Roberto bred dam. He carried a five star terminal index of €144 and a calving figure of 6.5% on beef cows. He also carries one copy of the Q204X myostatin gene. Having the last call on this one was Oliver Gargan from County Cavan.

Jim Geoghegan from Streamstown in County Westmeath then traded Lisnagre Pat for €5,800. A son of Pirate and a Major bred dam, Pat boasted a five star terminal index of €169. The 15 month old Pat sold to a suckler farmer from County Westmeath.

€4,300 for Callo Phil ET sired by CF 52 and exhibited by Eugene Hand from County Westmeath

€4,200 for Aheybridge Pat sired by Scardaune Mark and exhibited by Michael Sexton from County Clare

€4,150 for Clonaltra Present sired by Cavelands Fenian and exhibited by Terry Bradley from County Westmeath

€4,000 for Camber Phil ET sired by CF 52 and exhibited by Vincent Mc Brien from County Leitrim

€3,600 for Loughros Padric sired by Goldstar Echo and exhibited by Harold Given from County Donegal

€3,500 for Camber Patch sired by CF 52 and exhibited by Vincent Mc Brien from County Leitrim

The next Society Sale is the Premier which will take place in Elphin Mart on Saturday the 20th March, with 76 bulls and 20 heifers catalogued