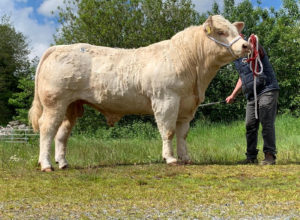 This week we took a look back at this year’s Spring bull sales and analysed what sires produced the most high selling young bulls. The Society hosted four Spring bull sales in total. The results show that there were two front runners, in Doonally New and Fiston. Both bulls proved extremely popular, but CF 52 edged the contest, selling the most sons of any bull, as well as producing the highest selling Charolais bull this Spring at €11,200. The bull achieving the highest average was Roughan Justbeau at €6,400, followed closely by Domino at €6,100. Below is a table with a breakdown of the results, ranked by the number of sons sold, along with their average sale price.