On Saturday last the Elite Charolais Heifer Sale took centre stage in Tullamore. Following last year’s record breaking sale, this sale always had big boots to fill. However, despite having a much larger entry than last year, the sale produced an average selling price of €4,230, with a 74% clearance. Many high priced heifers also left the ring unsold having failed to meet their reserve. Buyers were certainly in abundance, with a large number registered to bid from early morning. This was highlighted in the fact that seventeen heifers sold for €5,000 or more. 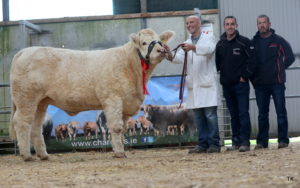 Topping the trade at €11,000 was Roughan Pea from Pat Mc Clean in County Donegal. Having failed to meet her reserve in the sales ring, the Donegal bred heifer exchanged hands outside the ring, selling to Cormac Mc Breen from County Cavan. A first prize winner from the pre sale show, Pea is a two year old daughter of Roughan Noyer and a Roughan Enzo bred dam. 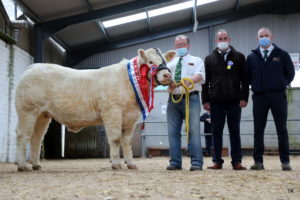 Next best was Goldstar Rihanna ET at €8,600 from Martin Ryan in County Tipperary. This August 2020 born heifer secured the overall junior championship earlier in the day, under judge David Bothwell of the well known Killadeas herd in County Fermanagh. Rihanna is a daughter of Goldstar Othello and a Major bred dam. She will now join Shane Cassidy’s pedigree herd in County Longford. The Ryan’s would go on to sell six of their seven lots for an average of €5,000. 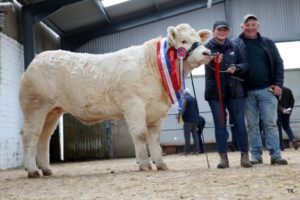 It was fair to say that the Overall Senior Champion, Baurnafea Royale, was one of the crowd’s favourites from early in the day. Exhibited by John Bambrick from County Kilkenny, Royale is a 22 month old daughter of the herd’s stock bull, Baurnafea Nelson, who was imported from France a few years ago. She went to sale with a four star replacement index of €89, a massive terminal index value of €168, and a calving figure of just 5.4%. She went under Tom Cox’s hammer at €8,000, once again selling to Cormac Mc Breen from County Cavan. 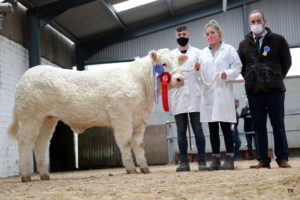 Also selling for €8,000 was the Reserve Junior Champion, Colomane Rachel ET exhibited by John Ward, who made the long journey from Bantry in County Cork worthwhile. This young 13 month old heifer is a daughter of Texan gie and a CF 52 bred dam. She will now take up residence in Northern Ireland with Damian Mc Caffrey. 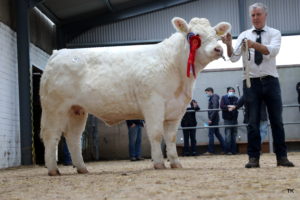 Selling at €7,700 was the Reserve Overall Senior Champion, Liscally Pretty Polly 4 ET, exhibited by Jon Regan from County Leitrim. This rising two year old catalogued with an attractive package of indexes, a calving figure of 5.9%, and two copies of the F94L profit gene. She is a daughter of Kelton Trident and a Balmyle Vagabond bred dam. She sold in calf to Louis Mc Gonagle from County Donegal.

Donegal breeder Pat Mc Clean was back in the money once again, when he realised €7,200 the rising two year old, Roughan Paris. This Roughan Noyer bred heifer goes back to a Roughan Divin bred dam. She sold in calf to Roughan Justbeau, heading south west with Jimmy Kelly from County Limerick. 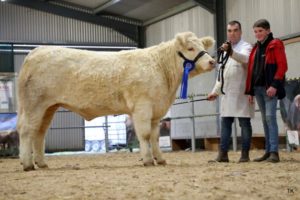 Ardabrone Princess ET who sold for €7,000

Hitting the €7,000 mark was Ardabrone Princess ET, exhibited by James Kelly from County Sligo. A second prize winner from the pre sale show, Princess is a daughter of Pirate and the well known show heifer, Ardabrone Molly ET. She sold with one copy of the Q204X myostatin gene. Princess will now join Tommy Mc Laughlin’s Islandview herd in County Donegal.

Following their success at last week’s bull sale, Louise and Colm Quinn were back in the limelight once again, when their heifer Ballym Pearl went under the hammer at €6,800. This daughter of Coom Indurain and a Goldstar Hector bred dam sold with an array of indexes including a five star replacement index of €102. The successful purchaser on this occasion was Joseph Feeney from County Leitrim.

Pat Mc Clean from County Donegal was back in the money when he traded Roughan Pity for a sum of €6,600. This rising two year old is a daughter of the French bred Roughan Mourinho and a Roughan Viceroi bred dam. She sold in calf to Roughan Justbeau  and once again Cormac Mc Breen from County Cavan was the highest bidder.

At the same price tag of €6,600 was Crossane4 Ruby for Eoin Mc Govern from County Sligo. This one is a daughter of the French sire Invictus and a Prime Roberto bred dam. She went north with Claire Ferris from County Down.

John Bambrick realised €6,400 for his second offering, Baurnafea Ronda. This 18 month old heifer is a daughter of Baurnafea Nelson, the same sire as the senior champion. Ronda goes back to Crossdrum Felix and Dromiskin Phoenix on the dam’s side. She sold to the Crockaun Charolais herd based in County Kildare.

Selling at €6,100 was Cremartin Patricia exhibited by Shane Maguire from County Meath. This in calf heifer is a daughter of Goldstar Ludwig and went to sale with a four star replacement index of €80. Having the final call on this one was young breeder Aidan Kinahan from County Limerick, the winner of this year’s Youth Development Competition. 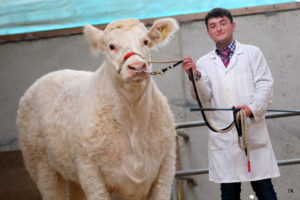 €6,000 for Limkiln Peg sired by Jumper and exhibited by Richard Hackett from County Clare

€5,700 for Dalehill Rapunzel sired by Fiston and exhibited by Basil Kells from County Cavan

€5,400 for Breaghwyhill Rose sired by Ballym Mylove and exhibited by Josephine O Connor from County Sligo

€5,000 for Goldstar Rhona ET sired by Goldstar Othello and exhibited by Martin Ryan from County Tipperary

The Society would like to wish all purchasers the very best of luck with their new Charolais heifers. Thank you for choosing Europe’s number 1 beef breed. The next Society Sale is the Christmas Cracker Bull Sale, which will take place in Elphin Mart on Saturday the 4th of December, with 100 bulls catalogued. Online catalogues will be available from the 23rd of November, after the next run of ICBF genetic evaluations.