Irish Charolais breeders have enjoyed some fantastic Christmas Cracker bull sales in recent year’s. This year’s sale took place in Elphin last Saturday and topped everything that has went before. An average sale price of €4,994, which is believed to be the highest ever achieved a Society bull sale in Ireland, and a clearance of 77%, highlighted the phenomenal demand for Charolais bulls on the day. It was positive to see buyers selecting bulls on quality and breeding, as well as indexes. Old favourites were certainly to the fore, with CF 52 and Domino featuring heavily in the high prices. Irish Charolais breeders should really take confidence from Saturday’s sale, the interest and demand for bulls clearly a sign of thing’s to come for Europe’s number one beef breed. 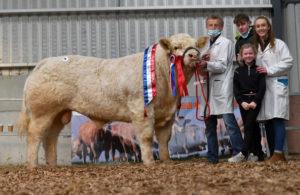 It was a dream come through for new breeder David Watts and his family, who were awarded the overall junior championship with their 14 month old bull Garra Rockey ET. To cap off a truly memorable day for the Galway family, Rockey went on to achieve the highest price of the day at €19,000. Rockey is a son of Maerdy Sinndar and the french bred cow, Kilcumreragh Dorothee. He is a full brother to the Bova AI sire, Sagesse Pierre, who was the overall male champion at the 2019 National Charolais Show in Tullamore. After a flurry of online and ringside bids, Tom Cox eventually dropped the hammer at €19,000, the highest price at a Society bull sale for some time. He was purchased by two leading UK herds, the Tweedale herd owned by Jonathan Watson and the Burradon herd owned by Chris Curry, who judged proceeding’s earlier in the day. 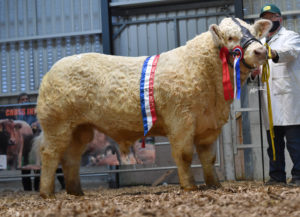 Selling at €12,600 was the overall intermediate champion, Goldstar Roger, exhibited by Martin Ryan from Thurles in County Tipperary. Roger is a son of CF 52, and the french bred cow, Goldstar Grenadine. This August 2020 born bull catalogued with a five star terminal index of €162 and carries two copies of the F94L profit gene. Having the final call on this one was Paddy Kirk from Plumbridge in County Tyrone. 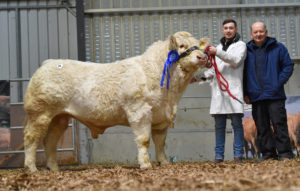 Tullaghan Remarkable ET who sold for €12,600

Hot on the Goldstar bull’s heels was the second prize winner from the same class as the intermediate champion, Tullaghan Remarkable ET from Michael Daly in County Leitrim. Another son of the great CF 52 and a Domino bred cow, Remarkable displayed a massive terminal index of €178 and carries one copy of each of the myostatin genes. Born in August 2020, the Leitrim bred bull attracted significant interest from commercial farmers, eventually settling at €12,600,  with Terence Mc Garrigle from Northern Ireland. 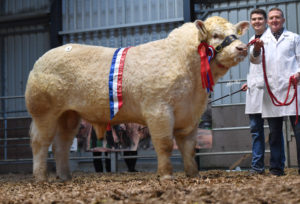 The other bull to hit the €12,000 mark was the overall senior champion, Tonroe Realmacoy, exhibited by Vincent and Gerard Callaghan from County Mayo. A son of Tweeddale Lookout and a Thrunton Voldermont bred dam, this powerful bull sold with a eye catching terminal index of €164 and one copy of the Q204X myostatin gene. He will now take up residence with Tateetra and Rathmore farms in County Louth. 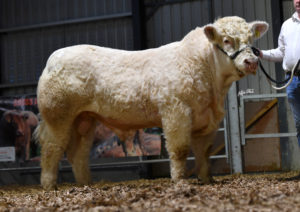 Next best was Inismurray Rocky ET at €8,200. Exhibited by Paul Burke from Grange in County Leitrim, this 15 month old bull is a son of Texan gie and and the CF 52 daughter, Liscally Northern Star 1 ET. He went to sale with a below average calving figure of 5.3% and one copy of the F94L profit gene. He went North to a suckler farmer in County Tyrone. 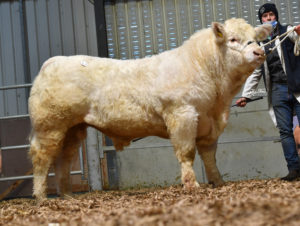 Selling at €8,100 was Liscally Regan 2 ET, from Jon Regan in Castlegal in County Leitrim. A son of Domino and a Grimaldi bred dam, this September 2020 born bull boasted a five star terminal index of €168 and carries one copy of both myostatin genes. This one sold North to a suckler farmer in Kesh. 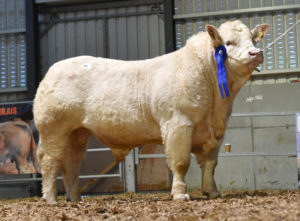 Right behind the Liscally bull was his stable mate and full brother, Liscally Regan 1 ET, selling at €7,500. Having picked up a second prize rosette in the pre-sale show, this one went to sale with a five star terminal index of €169 and one copy of the Q204X myostatin gene. He sold to Owain Llyr in North Wales.

Thomas Leonard from Ballina in County Mayo enjoyed success when his second prize winner Cilin Ryan exchanged hands at €7,000. Once again, the Mayo bred bull is a son of the legendary CF 52 and a Roughan Gibraltar bred dam. He catalogued with a five star terminal index of €162 and carries two copies of the F94L profit gene. He sold to a suckler farmer in County Longford. 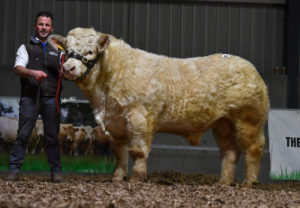 Tinnegarney Rembrandt ET who sold for €7,000

The second bull to hit the €7,000 mark was Tinnegarney Rembrandt ET, the property of John Mc Donald from County Carlow. Another son of the great French sire Domino and a Loulou bred dam, Rembrandt displayed a star studded terminal index of €157 and carries one copy of the Q204X gene. The Carlow bred bull went North to a suckler herd in County Tyrone.

Portanure Rebel was the third bull to exchange hands for €7,000. Exhibited by Gerard Farrell from County Longford, this August 2020 born bull is a son of Fiston and a Baltazhar bred dam. He sold with a five star terminal index of €141 and a calving figure of 6.2%. Having the final say on this one was a suckler farmer from County Westmeath. 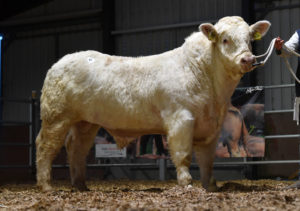 Jon Regan was back in the money once again, when he traded Liscally Regan 4 ET for a sum of €6,000. A son of Goldstar Echo and a Meillard Rj bred dam, this September 2020 born bull catalogued with a terminal index value of €144, a calving figure of 7.6% and carries one copy of the profit gene. Jon also parted company with Liscally Regan 8 ET for a sum of €3,900. This wrapped up a great day at the office for the Liscally herd.

The €6,000 price tag was achieved by three lots in total. The second bull to sell for €6,000 was the reserve senior champion Roughan Rudolf from Pat Mc Clean. This one is a son of Roughan Jaquard and a Roughan Enzo bred dam. He sold to a suckler farmer in Northern Ireland. The Roughan herd went on to sell three bulls for a total of €16,000. Roughan Readycash and Roughan Riso made up the Donegal herd’s consignment. Readycash is a November born son of Roughan Dix De Coe and a Roughan Echo 2 bred dam. Riso is a son of the aforementioned Roughan Jaquard and once again a Roughan Echo 2 bred dam. Both bulls sold for €5,000 and will go across the Irish Sea to Scotland.

Up next at €6,000 was another Donegal man, Manus Harkin with Cashelview Robert. This one is a son the popular NCBC sire Fiston and a CF 52 bred dam. He displayed a page full of stars and a calving figure of 5.4%. The May 2020 born bull sold to a suckler farmer in County Roscommon.

The young 13 month old Creeva Romeo romped his way to €5,700 for owners Gerald Lavin from County Roscommon. This stylish son of Lisnagre Elite and a CF 52 bred dam attracted interest from all corners of the ring before eventually getting knocked down to Derek and Clive Mc Adoo. 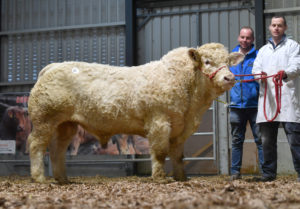 Pottlereagh Rocky who sold for €5,500

€5,500 for Pottlereagh Rocky sired by Pirate and exhibited by Elizabeth Hughes from County Cavan

€5,500 for Terryville Rocky ET sired by Bourgogne and exhibited by Patsy Lynch from County Donegal

€5,300 for Noble Rockstar sired by Pirate and exhibited by Harry Noble from County Longford

€5,200 for Bostonia Rightguy ET sired by Alwent Goldbar and exhibited by Brendan Feeney from County Sligo 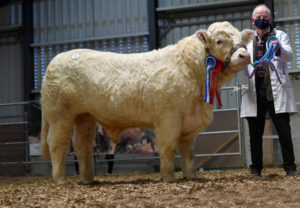 €5,200 for Aughnasheelin Rum sired by Newhouse Bigal and exhibited by Michael Mc Girl from County Leitrim

€5,200 for Islandview Rocky sired by Tombapik and exhibited by Tommy Mc Laughlin from County Donegal

€5,100 for Kilvilcorris Reno sired by Bunratty Mike Tyson and exhibited by Matt Ryan from County Tipperary 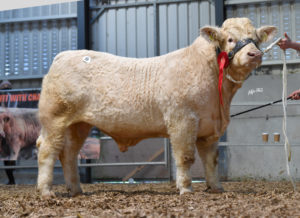 €4,800 for Dreamteam Russian Roulette ET sired by Hermes and exhibited by Andrew Norris from County Donegal

€4,800 for Tonyglasson Rambow sired by Pirate and exhibited by Martin Hughes from County Cavan

€4,800 for Colomane Rockstar sired by Goldstar Echo and exhibited by John Ward from County Cork 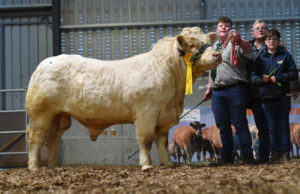 €4,600 for Faus Red Wood sired by Clenagh Lyle and exhibited by John Boyd from County Roscommon 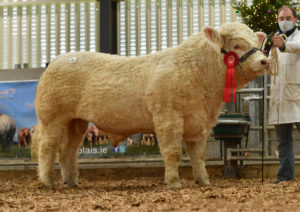 €4,600 for Corney Rivaldo sired by Major and exhibited by David Magee from County Cavan

The Sale also included four lots of highly sought after AI straws donated by the Rosanna Charolais herd and the Irish Charolais Cattle Society, with all proceeds going to Crumlin Children’s Hospital, and the Jack and Jill Foundation. It comprised of three lots of Erudit straws and one lot of Hermes straws. The four lots raised a whopping €3,310 in total. The Society would like to thank the Rosanna Charolais herd for donating to such a wonderful cause.

The Society would finally like to thank all bidders and purchasers at Saturday’s sale, we sincerely hope your new bulls are lucky ones. The next Society sale will be next Spring, until then have a happy Christmas and all the best for the new year.