Last Saturday saw the Society hold it’s first bull sale of the year in Tullamore Mart. A mixed day’s trading is probably the best way to sum up the sale. Out of over 90 bulls catalogued, just over 60 were put forward for sale, with many finding new homes prior to sale day. The average sale price on the day settled at €3,614. Once again the old favourites proved the most attractive lots on the day, with CF 52, Goldstar Echo and Fiston hitting the high prices. 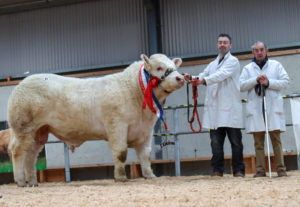 Grangwood Rock on Barney ET who sold for €8,000

Topping the trade at €8,000 was the Overall Junior Champion, Grangwood Rock on Barney ET exhibited  by Jerry O Keeffe from County Limerick. This classy son of Goldstar Echo proved top of his class in the show ring and later in the sales ring. Born in October 2020, he sold with a five star terminal index of €155, a calving figure of 7.8% and carries one copy of the Q204X gene. After a flurry of ringside and online bids, he was eventually knocked down to Ian Brock from Northern Ireland. The O’ Keeffe’s enjoyed a fine day at the office, selling their second offering, Grangwood Romeo ET for €5,400. Romeo comes from the same cow family as his stablemate, only this time the sire is the French bull, Jaquard. Romeo packed a whopping five star terminal index of €176 and a calving figure of just 6.3%.  He sold to fellow Limerick man Vincent Hogan. 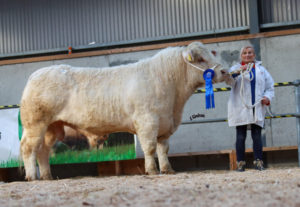 Selling at €6,000 was Camross Ross exhibited by Thomas Sheeran from County Laois. This July 2020 born bull is a son of Fiston and a Nelson bred dam. He catalogued with a page full of stars and a calving figure of just 4.8%. Wrapping this one up was Terence Mc Cann from County Wexford. 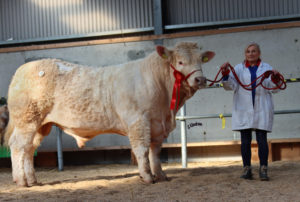 The Sheeran’s were back in action again, when their first prize winner Camross Rocco went under the hammer at €4,600. Another July 2020 born bull, Rocco is a son of Tombapik and a Lisnagre Elite bred dam. Once again stars were in abundance, along with a calving figure of 7.1% on beef cows. He went west with Patrick Rooney from County Galway. 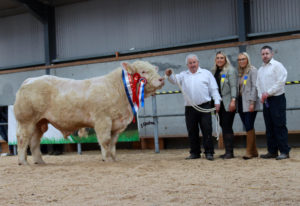 Judges Eimear and Caoimhe Mc Govern from Northern Ireland tapped out Ballinroey Rock ET as their Senior Champion early in the day. Exhibited by Michael Hanlon from County Longford, Rock went on to sell for €5,700. A son of the great CF 52, the Longford bred bull packed a five terminal index of €160 as well as carrying one copy of both the Q204X and F94L genes. He sold to a suckler farmer Northern Ireland. 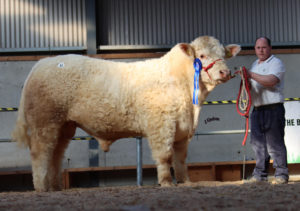 Trading at €5,000 was the stylish Fermoyle Ricky exhibited by William Scanlon from County Mayo. This 17 month old bull is a son of Fiston and a Pirate bred dam. Once again, stars were clear to be seen, with five stars across the board on most traits. This coincided with a below average calving figure of just 4.5% on beef cows. He was snapped up by a suckler farmer from County Westmeath.

The Reserve Junior Championship was awarded to Mattie Kelly from County Galway, for his 15 month old Cloughbrack Rolls Royce. A son of Goldstar Othello, this young bull displayed a five star terminal index of €153 and a calving figure of 5.4%. He was knocked down at €3,800 to a suckler farmer from County Longford.

Cloughbrack Rolls Royce who sold for €3,800

The Reserve Senior Championship went the way of Tinnegarney Rolex ET, exhibited by Michael Mc Donald from County Carlow. A son of Bourgogne and a Major bred dam, this powerful bull catalogued with a five star replacement index of €109. Having failed to meet his reserve, he left the ring unsold. His herd mate, Tinnegarney Ronaldo ET did met his reserve however, selling for €4,400. This one is a son of T-Urambo and the Black out bred dam, Delphine. 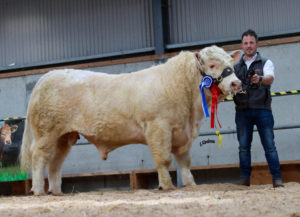 Niall Mc Nally from County Monaghan enjoyed a successful day at the office, selling all four of his entries for an average of €3,650. Leading Niall’s trade was Derryolam Roger at €4,000. This 15 month old bull is a son of CF 52 and a Plexus bred dam. He sold with a calving figure of just 5.6% and carries one copy of the Q204X gene. Derryolam Robb was next best from the Mongahan herd, selling for €3,800. This one is a son of Nelson and a CF 52 bred dam. With a star studded page of indexes, a calving figure of just 4.3%, and one copy of the F94L gene, Robb attracted significant interest in the sales ring. 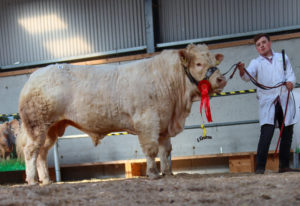 Chanonstown Royalty who sold for €3,500

Michael Carey from Killucan in County Westmeath traded the first prize winner Chanonstown Royalty for a sum of €3,500. Sired by Whitecliffe James, this July 2020 born bull went to sale displaying one copy of each Myostatin gene and a calving figure of 6.4%. He was snapped up by a suckler farmer from County Roscommon.

The next Society sale is the Premier Charolais Show and Sale, which will take place in Elphin Mart on Saturday the 19th of March. It will comprise of 65 bulls and 35 heifers, all pre inspected to a high standard. Catalogues will be available at www.charolais.ie from the 7th of March.