It’s always a good sign when catalogues sell out on the morning of a sale, as was the case at last Saturday’s Premier Charolais Show and Sale in Elphin Mart. The sale produced a flying trade for Charolais bulls, with 80% of the bulls on offer selling for an average of €4,636. The trade was greatly boosted by a strong showing of UK and Northern Ireland customers. A total of nine bulls sold across the water, with ten selling to Northern Ireland. The smaller offering of heifers sold for an average of €3,993. 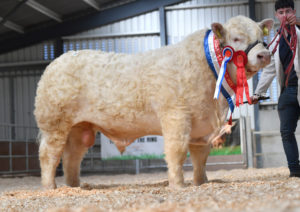 Taking top spot in the pre-sale show and the sales ring was Breaghwyhill Sammy, exhibited by Eamon and Daniel O’ Connor from County Sligo. Judge Mike Massie of the renowned Elrick herd in the UK selected the 14 month old Sammy as his Overall Junior Champion early in the day. Sired by Newhouse Bigal, and out of a Texan gie bred dam, he catalogued with an impressive set of indexes and a calving figure of just 5.4% on beef cows. He also carries one copy of the F94L profit gene. Two online buyers from the UK fought it out for the Sligo bred bull, before eventually getting knocked down to Innes Farms in Aberdeen for the top price of €10,500. 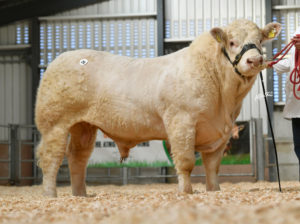 Trading at €7,000 was Kilvilcorris Royal, the property of Matt and PJ Ryan from County Tipperary. Royal is a 16 month old son of the great CF 52 and a Pirate bred dam. He carries a five star terminal index of €142 and a calving figure of 7.5% on beef cows. Carrying one copy of the F94L gene, the Tipperary bred bull attracted significant interest in the sales ring. After some brisk bidding he was wrapped up by the Devine brothers from Strabane in Northern Ireland. 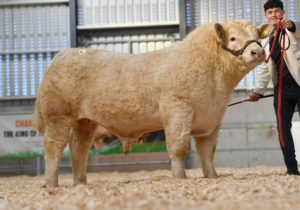 The O’ Connor’s from County Sligo were back in action once again when their other 14 month old bull Breaghwyhill Spectacular went under the hammer at €6,800. A son of Fury Action and a TZA bred dam, this classy young bull displayed all the characteristics of his grand sire, the great Domino.  He sold to Christopher Connon in Scotland. 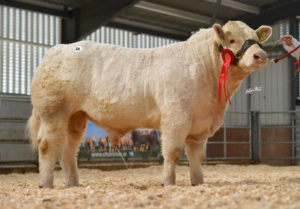 Patrick Whelan from County Roscommon also received a call of €6,800 for his stylish young bull, Creeve Simon. At just over 13 months old, Simon stood top of the line in the youngest bull class of the day. Phenotype and indexes were both on this bull’s side, as he packed a page of full stars and one copy of the Q204 gene. A son of the popular Fiston and a Lisnagre Elite bred dam, he went North to a suckler farmer from County Tyrone. 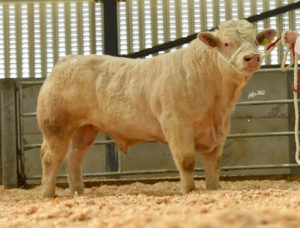 Also selling at €6,800 was Noble Rogar from Harry Noble in County Longford. A son of the french bred Untel and a Cottage devon bred dam, this 15 month bull carries one copy of both the Q204X and the F94L genes. He was knocked down to Andrew Cammond from Northern Ireland. 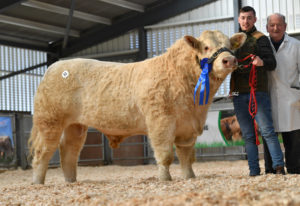 The Leitrim bred Tullaghan Sam wasn’t far behind at €6,600. Exhibited by Michael Daly from Tullaghan, this 14 month bull stood second in his class in the pre-sale show. He is a son of Goldstar Ludwig and a Fury action bred dam. Sam went to sale with a four star terminal and replacement index, as well as one copy of the Q204X gene.  He will now join Victor Chestnutt’s herd in Northern Ireland. 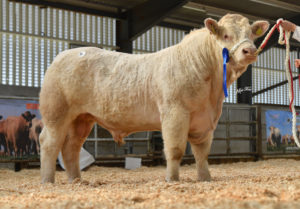 The Noble family from County Longford were back in the limelight once again when they realised €6,400 for Noble Red Rum. This powerful son of Horace JD and a Texan gie bred dam went to sale with a decorative set of indexes and a calving figure just 4% on beef cows. Born in December 2020, he received a second prize rosette in the pre sale show. Having the final call on this one was Pauric Gibbons from County Donegal. 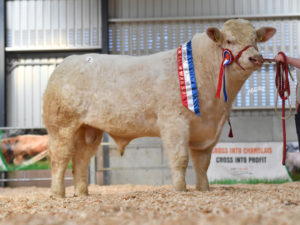 The Overall Senior Championship went the way of Hillsidehouse Ronaldo, exhibited by Patrick O Grady from County Mayo. A son of Whitecliffe James and a CF 52 bred dam, this October 2020 born bull catalogued with a massive terminal index of €173, along with a calving figure of 6.8% on beef cows. He went to a suckler herd in the South of Ireland. 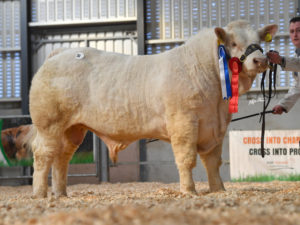 The Cork bred Colomane Spartacus claimed the Reserve Junior Championship for breeder John Ward. Having won his class at last year’s National Calf Show, Spartacus came to sale with great expectation for the Cork men. A son of Goldstar Echo and a Meillard Rj bred dam, he possessed a five star terminal index of €160 and a calving figure of 4%. Spartacus went under Tom Cox’s hammer at €5,800, snapped up by Scottish buyer Christopher Connon.

Basil and Victoria Kells from County Cavan had a successful outing, trading Dalehill Russell for a sum of €5,600. Born in October 2020, Russell is a son of the aforementioned Fiston and a Prime Roberto bred dam. Once again indexes were in abundance, along with a whopping terminal index of €171 and a below average calving figure of just 4.8%. This one sold to a suckler farmer from County Galway. 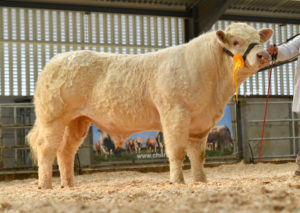 Also exchanging hands at €5,600 was Williamstown Renaldo exhibited by Aidan Farrell from County Westmeath. Sired by CF 52 and out off a Major bred dam, this November 2020 born bull sold with a five star terminal index of €142, a calving figure of 6.5%, and one copy of the f94L gene. Renaldo sold to a suckler farmer from County Westmeath. 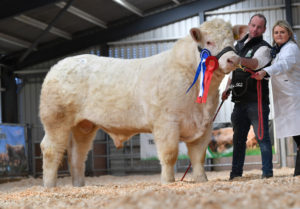 The Reserve Senior Championship was awarded to Martin Hughes from County Cavan, for his December 2020 born Tonyglasson Rudolph ET. This one is a son of Newhouse Bigal, who it must be said featured well on Saturday. The Cavan bred bull was a first prize winner from last year’s National Calf Show, and went to sale with an array of stars, along with one copy of the F94L gene. He sold for €4,600 to a suckler farmer in County Clare.

Other leading prices in the bulls included:

€5,100 for Roughan Rick sired by Roughan Jaquard and exhibited by Pat mc Clean from County Donegal

€5,000 for Sunnaghmore Raymond sired by Newhouse Bigal and exhibited by Andy Mc Govern from County Leitrim

€5,000 for Caltun Rossa sired by Cavelands Fenian and exhibited by Maria Calvey from County Mayo

€5,000 for Kilvilcorris Sidney sired by Bunratty Mike Tyson and exhibited by Matt and PJ Ryan from County Tipperary

€5,000 for Landleague Rolo ET sired by Domino and exhibited by Francis Ryan from County Galway

Topping the trade in the female section was Roughan Poser from Pat Mc Clean in County Donegal. Having failed to meet her reserve in the sales ring, she sold outside for the top price of €8,000. A daughter of Roughan Mourinho and a Roughan Galant bred dam, Poser sold in calf to Roughan Verygood. Buyer on this occasion was Cormac Mc Breen from County Cavan. 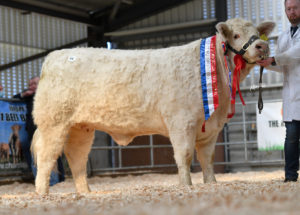 The Overall Female Championship was claimed by Clenagh Precious 2 ET exhibited by Michael Quin from County Clare. Born in October 2019 and sired by the UK sire Barnsford Ferny, Precious went on to sell for €7,200 to Frank Garvey from County Leitrim. She sold in calf to the easy calving Society bull, Vosgien VF. 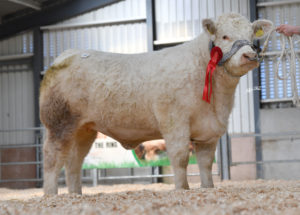 Selling at €5,000 was Ballynabreen Roisin from John Mc Dermott in County Donegal. Roisin is a daughter of the French bred sire, Ballym Mylove, and goes back to a long line of Lyonsdemesne bred cows. She stood top of her class in the pre-sale show and was wrapped up by Michael Davenport in County Clare.

Also selling at €5,000 was Baurnafea Petal exhibited by John Bambrick from County Kilkenny. Petal is a daughter of the herd’s stock bull, Loulou, and goes back to Farmleigh Lourda. She sold with a four star replacement index of €82 and will now reside in Dowra, County Cavan. 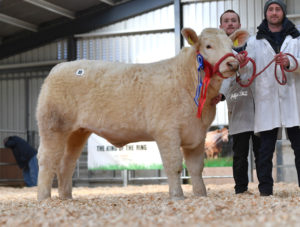 Having claimed the Reserve Female Championship for breeder Gerard Beirne from County Roscommon, Caldragh Rose ET went on to sell for €4,000. A daughter of Plexus and a Pirate bred dam, this 15 month old heifer was purchased by James Donnelly from County Longford.

The Society would like to wish all buyers the very best of luck with their purchases on Saturday. The next Society bull sale will take place in Tullamore Mart on Saturday the 23rd of April.