Buyers came out in force for last Saturday’s Show and Sale of Charolais bulls in Tullamore Mart. Trade was lively right from the outset, boosted by the fact many of the bulls catalogued had found new homes prior to the Sale. Overall, 80% of the bulls put forward on the day sold to an average of €4,053, up nearly €500 on the same sale last year. Eight bulls sold for €5,000 or more. 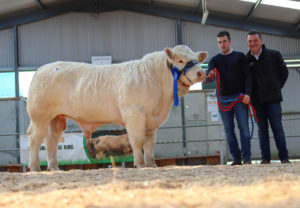 Topping the trade at €6,300 was the Quinn family from Edenderry in County Offaly, with Ballym Rob, a son of the homebred Ballym Mate. This December 2020 born bull goes back to Bourgogne and Ballym Bouvreuil. As well as picking up a second prize rosette in the pre-sale show, the Ballym bull displayed an impressive set of indexes, along with one of the lowest calving figures in the catalogue of 3.7% on beef cows. Having the final call on the sale leader was John O Dea from County Clare. The Quinn’s rounded off a great day when they sold Ballym Royale at €5,200 and Ballym Sebastian for €4,500. Both bulls are sons of the herd’s stock bull, Ballym Mylove, who was imported from France a few years ago. Royale packed a massive set of indexes as well as a calving figure of just 5% on beef cows. He also carries two copies of the Q204X myostatin gene. Sebastian offered one of the highest terminal indexes in the catalogue of €182 along with one copy of the F94L gene. He went North to a suckler farmer in County Down. 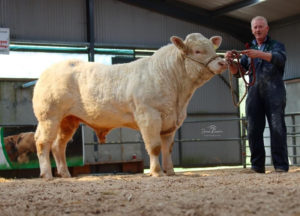 Hot on the heels of the Ballym bull was one of the youngest bulls on the day, Aquanchoua Sam ET, who traded at €6,200. Exhibited by Peter Mc Laughlin from County Cavan, Sam is a son of the Bova AI sire, Hideal, and a CF 52 bred dam. At just over 13 months old, the Cavan bred bull carries one copy of both myostatin genes, and a five star terminal index of €135. He also went to a suckler farmer in County Clare. 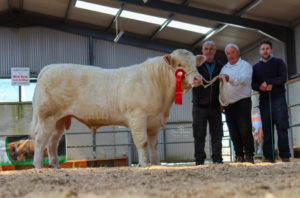 The third bull to hit the €6,000 mark was Ballinroey Roman ET, the property of Michael Hanlon from County Longford. This 16 month old bull is a son of CF 52 and a Celtic Vichy bred dam. He is one of many successful bulls from this flush for the Hanlon’s, with a full brother standing senior champion at Tullamore in February. He sold with a massive terminal index of €162 and and one copy of the F94L profit gene. Wrapping this one up was Harney Farms in County Westmeath. 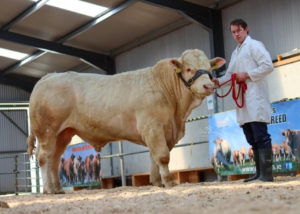 Kerry breeder Pat O Hara enjoyed a great day’s trading, selling two bulls for €5,800 and €3,700 respectively. First up at €5,800 was Dreena Rory, a son of the French sire Chic and a Bivouac bred dam. He catalogued with a page full of stars and the lowest calving figure on the day of 2.9%. Tom Cox dropped the hammer on this 17 month old bull to a suckler farmer from County Meath. Selling at €3,700 was Dreena Robert, a son of Goldstar Ludwig and a Prime Roberto bred dam. Once again he carries a five star terminal index of €143 and a below average calving figure of just 4% on beef cows.

Noel Laverty from County Monaghan had a good day at the Office, trading Tullyharnet Simba for €5,600. This January 2021 born bull is a son of Fleetwood and a Jaquard bred dam, who goes back to Utrillo Mic. He displayed a five star replacement index of €99 and a five star terminal index of €142, accompanied by a calving figure of just 5.3%. He sold to a suckler farmer in County Galway.

Two bulls went under the hammer at €5,000. The first of which was Cattanview Razzle Dazzle, exhibited by Tim Higgins from County Leitrim. Born in December 2020, Razzle Dazzle is a son of the Dovea AI sire, Bivouac, and a Blelack Digger bred dam. As his pedigree would suggest, the Leitrim bred bull carries a phenomenal set of indexes and a calving figure of just 4.1%. He sold to a suckler farmer from County Wicklow. Also selling at €5,000 was Baurnafea Sean Og, from the herd of John Bambrick in County Kilkenny. At just over 14 months old, Sean Og is a son of the herd’s French bred stock bull, Baurnafea Nelson and a Baurnafea Elvis bred dam. He sold with a five star terminal index of €150 and one copy of the Q204X muscle gene. 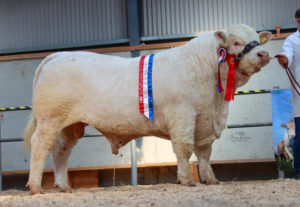 Securing the Overall Championship in the pre-sale show was Roughan Rebel exhibited by Pat Mc Clean from County Donegal. This powerful bull is a son of Roughan Jaquard and goes back to Roughan Verygood on the dam’s side. Unfortunately, he failed to meet his reserve in the sales ring. 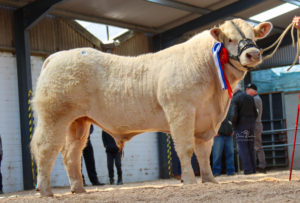 In reserve was Goldstar Schillaci ET from the herd of Martin Ryan in County Tipperary. This 15-month-old bull is a son of Goldstar Hugo and a Texan Gie bred dam. Carrying one copy of the Q gene and a €151 terminal index, Schillaci was snapped up at €4,100 in the sale ring.

Other leading prices from Saturday included: 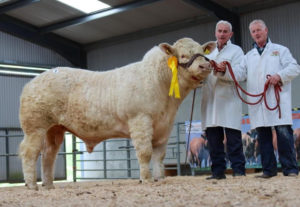 €4,700 for Aheybridge Ross sired by Pirate and exhibited by Michael Sexton from County Clare

€4,600 for Aheybridge Sammy sired by Powerstown Major and exhibited by Michael Sexton from Clare

€4,000 for Lisnagre Rambo ET sired by Bourgogne and exhibited by Jim Geoghegan from County Westmeath 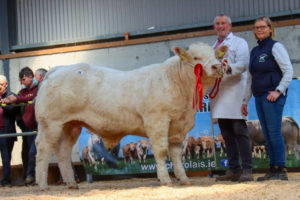 €4,000 for Tullyvillage Shane sired by Carrickbrack96 Hutch and exhibited by William Flynn from County Galway

The Society would like to thank all bidders at Saturday’s sale and wish all purchasers the very best of luck with their new bulls. The next Society sale will take place in Tuam Mart, County Galway, this Saturday the 30th of April. There are 29 bulls catalogued.