Tuam Mart was the venue for last Saturday’s Show and Sale of Charolais bulls. The sale had been cancelled for the last two years due to the pandemic. However, this certainly did not effect the trade, which was greatly enhanced by the small number of bulls put forward for sale on the day. Just two bulls went home unsold, resulting in a 87% clearance and an average sale price of €3,310. Topping the trade at €5,500 was the first lot in the catalogue, Landleague Romeo ET, the property of Francis Ryan from Rosscahill, County Galway. This powerful September 2020 born bull is a son of Goldstar Echo and Cottage Eve, a Baurnafea Baccarat bred daughter. Romeo picked up a red rosette in the pre-sale show, and displayed a five star terminal index of €151 along with one copy of the F94L profit gene. He sold outside the ring to a suckler farmer from County Longford. 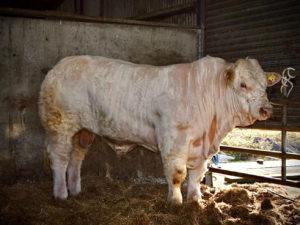 Selling at €4,450 was Whitepark Seamus, a son of Bivouac and a Inverlochy Gurkha bred dam. Exhibited by Patrick Hillary from County Galway, Seamus was just over 13 months old on the day of sale. He catalogued with an impressive set of indexes, which included a five star replacement and terminal index, along with a calving figure of just 5.9% on beef cows. A second prize winner in his class, Seamus was snapped up in the sales ring by local man, Martin Keane. 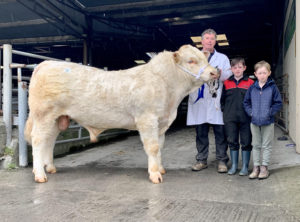 Next best at €4,000 was the Reserve Champion, Glenree Simon ET, exhibited by John O Grady from Glenamaddy, County Galway. A son of Anside Foreman and a Major bred dam, Simon was just over 13 months old on the day of sale and stood top of the line in the last class of the day. Despite being short on stars, quality took preference, as the young Galway bred bull attracted significant in the sales ring, eventually getting knocked down to a suckler farmer from Athenry. 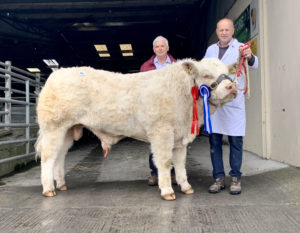 Judge for the day was County Galway breeder, John Jenning’s, and he selected Cloughbrack Samson as his Overall Champion. This one was exhibited by Mattie Kelly from Newbridge, and is a son of Scardaune Mark and a Balmyle Vagabond bred dam. At just over 14 months old, he displayed a page full of stars, along with a calving figure of 6% on beef cows and one copy of the F94L profit gene. Tom Cox dropped the hammer on the Champion at €3,900, selling to a suckler farmer from County Clare. 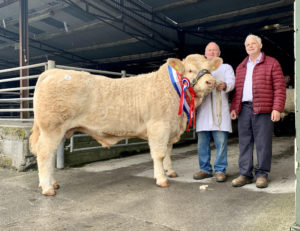 The Society would like to thank all underbidders and buyers at Saturday’s sale. Once again it was a solid trade for Charolais bulls, underpinned by a strong showing of commercial farmers.