Not far from Nobber in County Meath, Hubert Hicholson farms in association with his brother Matthew. The pair run approximately 85 suckler cows, 75% of which are Charolais cross. The focus of the Nicholson’s is breeding replacement females, with milk and fertility. The cows on the farm are a testament to that breeding policy. Apart from the replacements retained in the herd, all progeny are put to beef. This means as well as producing females with strong maternal qualities, the cattle must also have the ability to gain weight efficiently, grade, weigh, and pay at slaughter. This is where Charolais is key. 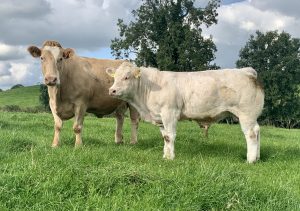 A Charolais cross cow and bull calf on the farm

Charolais is used in the form of stock bulls and through AI. The current stock bull on the farm is Glera Prince, who is a son of Burradon Tallisman. Prior to this a son of Rancard was used within the herd, who bred exceptionally well, both maternally and terminally. Charolais bulls used in AI are mostly maternal type bulls, such as Voimo, Calogero, Lapon and Elios. Bulls like Tombapik would have been used heavily in the past, leaving some great breeding females with milk. A small percentage of Simmental would also be used through AI. 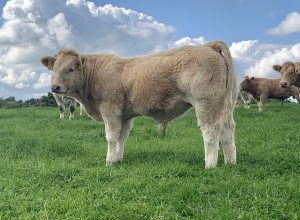 A typical Charolais cross bull calf on the farm

The herd is entirely Spring calving and boasts some impressive performance figures. Currently the herd has a calving interval of 388 days and weans 0.92 calves/cow year. However, the robust nature of the Charolais cows and their ability to wean heavy calves off grass is most impressive on this farm. Hubert is quick to point out that the calves only get creep for two weeks prior to weaning. “This really cuts down on input costs, especially in today’s climate”. The fact that many of the weanling’s come off their mothers at 50% off their mother’s liveweight is proof in itself. 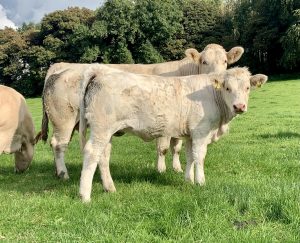 A Charolais cross cow and heifer calf on the farm

Another important tool Hubert uses is Myosatin testing. The majority of the cows in the herd are Myostatin tested. Because the herd’s previous stock bull was a Q204X carrier, many of the cows in the herd a Q204X carriers. It is for this reason that Hubert only uses bulls that are free off the Q204X gene on these cows. This avoids difficult calving’s and heavy birth weights. The herd’s current stock bull is free of the Q gene but carries one copy of the F94L gene. Hubert has found this combination to work quite well, with a good balance of maternal and terminal traits coming to the fore. 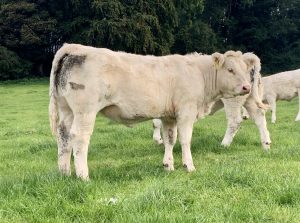 Some might think that such maternal type cattle would struggle to pay their way as good beef cattle at slaughter. This is far from the case on this farm. Bulls are slaughtered at 20 months off age. The only meal they receive in their lifetime is two weeks before weaning, they are kept on 2 kg/head/day over the first winter, and are fed ad lib for 12 weeks prior to slaughter the following autumn. The results from which speak for themselves. All bull’s grade U’s, with the last batch of bulls averaging 420kgs deadweight. The standard is much the same across the board on the heifers. They are slaughtered under 30 months of age, with the last group averaging 360kgs deadweight. 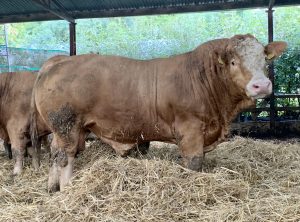 A Charolais cross bull being finished on the farm

It is not too often you come across a suckler enterprise so focused on producing replacement females. The fact that is does not affect the performance of the cattle from a terminal point of view is extremely positive, and proof that maternal type Charolais can perform at the highest level. Efficiency is so important on this farm, simply because it must make financial sense. This farm is proof that maternal Charolais can tick all the boxes if the breeding policy and management is right. The next Irish Charolais Cattle Society Show and Sale will take place in Tullamore Mart on Saturday the 5th November, with 128 Charolais bulls on offer. This will be followed by the Elite Charolais Heifer Show and Sale, which will take place in Tullamore on Saturday the 12th November.